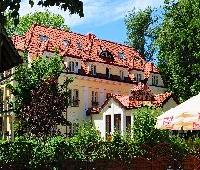 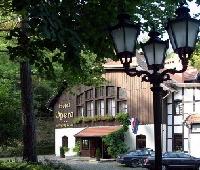 I stayed here for business and it's a nice hotel, the staff are friendly and helpful, the room was clean and basic. No AC but a big window that could be opened. Breakfast in the morning was as expected.

I have only two hand sir!

Well, about this hotel I would like to say that it is absolutely bad, It lacks air condition in the majority of rooms, the temperature at night in August was around 32 degrees and the room was like a hell I need slept with opening the windows. On the other hand the staff in this hotel are usually serious and quite but hard workers and very honest for instance I forget something in my room and they found and returned it. The rooms are old and ugly and the meal in the restaurant very bad, certenly it was a bad choice. On the other hand I had an argument with a waitress in this hotel, I was eating my dinner in the restaurant and I asked her very politely for some bread and this waitress told me very rudely that she only had two hands and I told her that I asked her very politely and I deserved a very polite answer. It was a bad experience in this horrible hotel.

I did stay there during a business visit in Gdynia. I was fortunate to get a double bed so I did had enough space. The room was small and the TV was mounted to the wall and very far away from the bed. Another disadvantage is that you have only polish channels. Being a tourist city I expected that the have SAT TV. Anyway, my business partner was not so lucky and he had 2 single beds which even did not even where together because the room was long and small. The breakfast buffet was average. But I have to say that the staff did everything to make us feel good.
Despite the small room I will return because of the friendly staff.

Stayed at this hotel for 2 days at the start of June having previously staying at the hotel 3 years ago. First thing we noticed is the hotel is starting to look a bit run down. Nothing seems to have changed in 3 years. Room was comfy but there was no hot water in the bathroom. When telling reception we were told its an old building and you will have to live with it. Breakfast was good and we had a few drinks at the bar in the evening although this does shut at 10pm!! Overall I don't think I would return to this hotel as it doesn't seem as good as before.

I stayed in this hotel whilst visiting Gydnia for a running race, as part of a tour group.
We arrived at about 11.30am and the hotel pulled out all of the stops to get us in our rooms straight away. (28 people)
The rooms have lots of radiators in them and also a very big window that opens fully, so whatever the temperature, you will be happy in the room. The room was very clean and had a large fridge in it and a good size shower. The TV in the room had over 50 channels, but there were none in English. There is free wifi in the hotel, but it only works consistently in the hotel Reception.
My room overlooked the main road, but I was on the 4th floor and was not disturbed by any noise on the Friday and Saturday night that I stayed there, even though my large window was open. However, at 7am on Sunday, rather loud church bells ring for a few minutes. There is also a bus stop outside the hotel, so ask for a room on a high floor.
The hotel has a large choice cold buffet breakfast with hot scrambled eggs and sausages. There is also a small supermarket close to the hotel that is open 6am to 11pm 7 days a week and the hotel is just a few minutes walk from the main town centre.