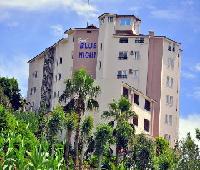 Sooner this place closes, the better!

This is without a doubt the worst hotel I've ever stayed at. I've never been so insulted in my life!

First of all the service is horrendous, the staff just hang about either trying to get money out of you or ignoring you entirely. The food was just a rotation of the same thing every other day, it was rubbery and stale - my friend survived the entire week off bread.

The only staff member that spoke passable English came up to me in the spa, and after a lengthy conversation in Turkish with the masseuse, tried to convince me that I 'retain water' or some nonsense and it's going to make me fat! Luckily for poor waterlogged me the masseuse was willing to arrange a program of massages for me if I was willing to pay such-and-such an amount! Absolute racket.

The worst was yet to come though. We started getting things stolen out of our room and when we confronted the manager he called us liars and told us it's impossible. Fast forward to when we finally get home (thank God), I post an honest and clear review on their facebook page and a few hours later I get a facebook message from the manager ASKING ME IF I'M GREEK. And telling me to take it down! THEN they comment on the review saying that I AM DELUSIONAL AND HAVE NO BASIS IN REALITY.

It is the most shocking, disrespectful, inappropriate and unprofessional interaction I have ever had. They've since blocked me from their facebook page entirely - the truth is not something they want people to know about, apparently.

I would advise anyone to not only give this place a wide berth - tell your friends and family. I can't do anything about my holiday now but I can at least try and help other people avoid the same experience.

Knew was a quiet and small hotel but the staff were not very interested in British guests, they only livened up when a group of Turkish guests arrived towards the end of our week there. No thought was given to food to suit all, they assumed we wanted chips every night because we're British, even though I tried almost everything, though not a lot of choice. Wanted a relaxing holiday but as all inclusive would still like a bit of entertainment, have been to Turkey before and loved it, would never use this hotel again.

The hotel is at the top of a huge hill, which if you're looking to lose weight this is the place for you. Me and my friend arrived at 2am and were greeted by NO'ONE. My friend was running around the hotel for 20 minutes trying to look for someone baring in mind we had just been on a 5 hours flight then a 2 and half hour bus journey. So anyway.. We got someone then got to bed.
First few days were okay, horrible food. Choice of 3 hot plates same food every single day! Pool was unclean. Maids did not come every day for fresh towels or toilet roll. Broken umbrellas and not enough so as Scottish people know.. We burn!
Most of the staff did not speak English, nor did anyone who stayed their. We noticed as the days went on that things started to go missing from our room. Such as money, jewellery. When we confronted the manager was rude and called us liars and said it wasn't possible.
Their was absolutely no entertainment and we were their for 11 nights. Was so boring at night as their is not much around you either.
Air con didn't work in room, lights flickered on and off!!
Shopping was about the highlight of our holiday! Avoid this hotel and go somewhere else! It's cheap for a reason!! Did not enjoy our stay here at all!!

My partner booked this hotel for us for a holiday in Turkey and the photos online made us feel confident about it despite the reviews.. Should've listened!! This hotel is awful. To even get to it you have to climb up a huge hill and then even more steps to get into the hotel. The receptionists were rude and arrogant, chewing gum extremely loudly and smoking in the lobby at the desk. Nobody spoke proper English and it was impossible to get any information about anything. The elevator clanked and sounded broken, the hallway lights were always off and the doors were impossible to open, close and lock. The first room we were put in was the wrong room, and was the size of a shoebox, the receptionist made us wait for him to find the right room for us because he didn't know what rooms were where!! Our second room was spacious, dull, empty and unappealing. The wall was cracked, there were stains everywhere and the bed mattress was practically on the floor. Me and my partner ended up staying across the road in another hotel. Do not book this hotel!!

Most staff not very helpful. Food was ok just. There is a steep hill out side the hotel and if you are disabled or elderly, you would struggle. Not really a hotel for English people. Mostly Russians, Germans and Turkish people while we were there. I like Turkey but would go somewhere else next time.