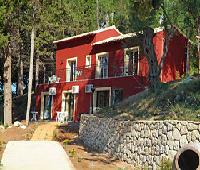 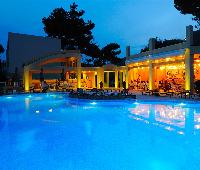 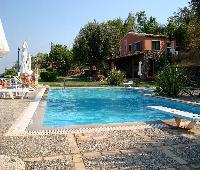 Stayed in a two bedroom cabin. Very nice room. Was clean with comfortable queen beds about a 5 minute walk to the beach and also has ocean view (distant but still can see water). Cabins have a deck with chairs, grills, picnic table. Also a full size fridge, coffee maker, and flat screen televisions. Nice pool. Near stores and a great little farmers market/lobster market. Free wifi and plenty of parking

We planned to stay here two nights, but after the first night we had to leave after a night up due to noisy mice inside the cottage.

My husband caught one of the mice and carried it outside in the trash bin, but soon after the noise started again as more mice appeared.

We complained about the mice next morning and agreed after some discussion with the owner on a full refund for both days we had paid for and got a handwritten note saying “Fully refund”, However, we never saw the money and several emails to The Landings Inn remained unanswered.

We had to give up and lost the money, so I strongly recommend you to find other housing.

Apart from the mice issue, the rooms are worn down, there were hair in the bed and at the linen, towels, bathroom, and kitchen were all dirty.

We were hoping to get on of the cottages but could only get a motel room. The room itself was clean and bright but had a few places that weren't finished. Missing paint and such. Our neighbors next to us were loud and we could hear their conversations fairly late into the night and it prevented getting good sleep. The shower was so small I had trouble reaching over to shave my legs and such. The lady checking us in and out was very nice and helpful. It had a for sale sign up and the place itself was cute and had alot of potential(besides the motel section, needs some work.) so may be a nice place to check out in the future.

We booked online and when we get there the sign outside check in said the they are available until 6 pm. We got there at 5:45p, no one there. So we called and they said that room wasn't clean so to come back in an hour. When we came back, the "cottage" was reaking of bleach. So tiny, and it said it was "two bedrooms" false advertisement. Walk in to one room, there's. Bed, no door. Hideous, outdated, dirty, uneven paint on the walls, low sagging ceilings. No end tables at the beds, where the heck am I sappose to put my phone? Glass of water? On the floor? Kitchen was old, needed attention. If your going to run an establishment, you should keep these little homes looking decent. Couch in the kitchen was horribly stained and looked like it was picked up curbside. Grout in the shower was black...where it should be grey or white. Windows had no screens so you couldn't open them with out bugs or critters coming in. We tried calling the front desk numerous times, but no answer, and they never even returned the phone call. What if there was an emergency? Couldn't stay there, and yet they had the audacity to charge. Don't stay here. We weren't looking for an embassy suits, just a clean room for three people. We ended up staying st the comfort inn more towards Portland. So much better and clean, up to date. This place was not as advertised. How could anyone stay here??? You'd be better off sleeping in your car.