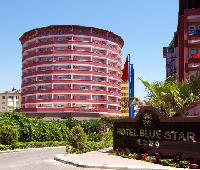 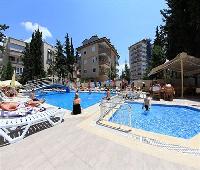 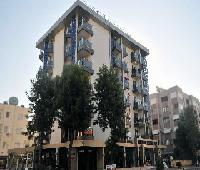 Loud old fashioned, but not too bad comparing to price

We have spent a week at Blue Star Hotel, booked two rooms to stay with wife and friends.

Reception: arrived at 09:00 AM, the reception told us that there are no cleaned rooms yet and we have to wait till the check in at 12:00. since our flight was really long and tiring we had to sleep in lobby chairs for three ours till we get our rooms. need to mention that they speak English and helpful when you ask (which is good in Turkey's standards)

Rooms: rooms are cleaned everyday which is perfect, the size is fine, but we had two separate beds and but we booked king size bed, so we moved furniture and but them together.

Food: food is not questionable in Turkey because it is almost always and everywhere super tasty.. but the breakfast was the same everyday.. dinner and lunch are very good.. the only negative thing was CATS ! my wife has a Phobia of cats and there are a lot of them everywhere specially during meals. (one of the worst nightmares for us)

Pool & Beach: it is actually fun.. it is in fact much better than how it looks like in photos. However, you need to get up little bit earlier to spare sunbeds since they are not really enough...
beach is nice, sandy and clean but sunbeds are chargeable which is really ridiculous and makes you feel like the beach is not part of the same hotel where you stay! i need to mention that only beer & soft drinks are all inclusive in the beach bar..other drinks are not!

Location: this is one of the best things regarding this hotel... close to Kleopatra beach and the centrum ... they have a bus to take you to the beach every 30 mins (not always on time) and two trips to the centrum (11:00 & 02:00)
make sure to know how to get back to this precise hotel as we get lost once when we came back at night from the near city of Manavagat.

Animation: they have a small animation team. they are trying very hard specially with kids.. of course comparing to big resorts they are doing almost nothing with adults..still they are not bad at all.

RATE: My reviews usually are based on the correlation between price and expectations >> to be honest we paid very little so i did not raise my expectations to the sky. therefore, as per the law "you get what you pay for" we got a good stay! if we paid much more i would give this hotel one out of five! 3/5 sounds reasonable to me.

ALERT: Russians are 90% of the hotel customers.. if you have a problem with that (loud at night and almost all the time) Avoid this hotel ... i personally didn't find this a big deal.

City of Alanya is really one of the best experiences i've got in Turkey.. if you have never visited.. DO IT

I arrived to the hotel in the morning with my family after I had booked 2 family rooms. An old fashioned hotel with a lot of cats running around!! Before I book the rooms I got a confirmation from the hotel through the travel agency that they will be a king sized bed in each room but I was surprised that there were only single beds in both rooms. Family connecting rooms were equipped with only one AC!!! When I was talking to the lady in the reception she said " I am sorry" but nothing to fix!! The problem as she said was the travel agency problem and they are not responsible!! An overcrowded hotel, not climatized, with only one porter to carry 5 big luggages and they didn't have a problem that we carry them on the escalators. Internet is a big joke. It only works in the lobby with a very weak signal!!! Other buildings have NO SIGNAL at all!!! The staff were mostly unable to speak English and not smiling although there were some great helpful guys serving in the hotel . In the room, bathroom was very nice and clean. However, the BEDS and PILLOWS were horrible!!! Hygiene in the hotel is big concern! I saw a waiter blowing on a plate!! And the ice cream were self served with kids that hold the ice cream spoon with their hands and touch everything. I complained to one of the waiters, but as if I didn't say anything!!!! Pool is good but needs more sun beds! Animation team was boring and focus only on Russians! Thanks to the few guys in the hotel that smiled at our faces and hope these remarks will be taken into consideration! This was my fifth trip to Turkey but definitely the staying was the worst! Although alanya city is one of the most beautiful, elegant, vibrant cities I have ever seen! I don't advice staying in this hotel unless you have a small budget!

Loud and not enough of anything

Many Russians, not enough sunbeds, food was the same almost every day. Long waiting line for food in the evening, not enough tables in the restaurant. We go a room on 5th floor, and had a peak of the ocean, that is about the only good thing I have to say.

We was placed in this hotel due to my children becoming ill and unable to fly
The hotel is basic but the animation team are funny and try to involve as many people as they can .
We are the only English speaking family in this hotel
It's mainly geared for danish , Russians
However the staff are friendly
This hotel is rated as a four star i would say more a two
Meals are average and again you get what you pay for

Don't know why the reviews were so bad. The food was lovely - it was local food & just keep an open mind. Great location opposite the beautiful beach & clean rooms/hotel. Can't complain about it and we would go back again.