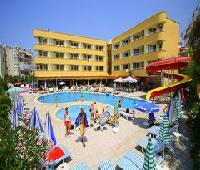 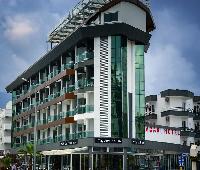 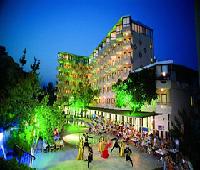 What a great place.. Food is amazing and so was the service.. You will never go hungry here and food is always being served!!! Would like abit more tables at the pool area.. There is a slide but would recommend it be supervised as the kids slide down with floaties which is not safe.. And the pool at the bottom of the slide is always filled with regular Swimmers even though there is a barrier.. No one is there to supervise... If any injuries i am sure parents would blame the hotel... Rooms are spacious and well maintained... Reception in the evening needs staff that could speak English... On 2 nights found the reception staff unable to communicate with me and unhelpful/rude!!
Wifi doesn't work outside.. Found it work Better in the passages close to rooms! The massages are amazing! Thanks to Ismail (spa manager) helping me find my sons ice pack on check out!
Would suggest calling him if you need someone that's speaks English!!!

The hotel shown is actually the luxury hotel where as theres actually two separate hotels opposite,which are both the blue wave hotel which they dont tell you about until you arrive.some of the staff were nice but one served my little brother vodka and coke one day which was very unprofessional.you could never get sunbeds at the pool as it only had about 40 sunbeds to supply for at least 120 people through out the day.drinks are all watered down so your constantly bloated and the bar shuts at 11pm. i wouldn't bother going if you are english since they treat you like crap and the food is mainly Russian and dutch,theres much nicer hotels around the area. However the areas very nice,its a small walk to the beach,is close to a nice burger place/restraunts and has a cash machine right outside the hotel.theres also a waterpark about 15 minutes away which is great and if you go you have to try the boat tours which are very good.

you get what you pay for!

My partner and myself stayed here for 1 week in oct. After reading a mixture of mixed reviews we went with an open mind. We only paid £60 each for all inclusive so wasnt expecting to much. The hotel its self was clean tidy and we were happy. Once in our room again we were happy as we had 2 bedrooms! Although our rooms were very dated and a little scruffy around the edges. It was clean and bed was comfy.
Meals! Well not alot of choice they had 4 different mains each lunch/dinner time. Usually a chicken or sausage stew type of thing. 2 diff pastas and rice and a whole load of salads and breads. I was upset that there was a toaster there but no in use! This would of made breakfasts more easier (egg on toast!) As veg for brecki isnt my thing! The pool and sunbed were all good always managed to get a good spot and always full sun all day long!
Drinks were a little lame. Just vodka gin raki red/white wine and efes beer! Cocktails charge at €7.Only one bar staff so ques all day long!
As we were a couple we didnt see any of the evening entertainment as more for kids. We sat by the pool most nights havin to sit on sun loungers as not enough tables for everyone but we were hapy to chill out and do that. No music by the pool bar in evenings. This would of made chilling out there better!
Overall we had a nice relaxed week here and although 90% of guests were russian it was fine if u want a holiday full of english holiday in england!!
We came home happy with our choice. Although there are some points we would change we had a fab stay here
There is a monday market (bazar) right outside of the hotel. Its huge and u will find all u need and cheap!
We probably wouldnt return but purley on the fact the food wasnt what we have had before on all inclusive. But we got what we paid for and had a nice holiday in oba. Alanya.

Recently visited blue wave suite for 7 days.. Got to be the worst allinclusive I have ever experienced. Drinks very limited, you have a choice of beer vodka gin or wine.. All absolutly discusting. Served in a tiny plastic cup no matter what time of day. Woman behind the bar during the day could use a smile on her face. Made it look like she didnt want to serve you or be there..food was awful maybe 2 or 3 dishes to chose from which u dont have a clue what it is because none of it is labled.. Had to eat bread all week because that was the only decent thing.. Hotel is 85% Russian so I think they more cater for them..hotel staff some nice some ignorent and some just dont speak a word of English.. So any questions you have they cannot answer.. The only good point I could put across is the pool area is nice and relaxing during the day.. But limited sunbeds and seating area.. And the rooms were nice.. Thats about it..

Good choice for that price, particularly for families with small children.

There are some bad things, and some good things. As for the bad things, the biggest minus is staff attitude. They are all about regulations, to the point that you think you're in some government office. Their knowledge of English is low, and if you try to ask for something a bit complicated, you're in trouble. WiFi coverage is good both in hotel, at the pool and at the beach, but the bandwidth is miserable.
The food was excellent, but that's a matter of personal taste. If you're not into Oriental dishes and spices, better look for another hotel, although it was too "European" for my taste. Hotel was renovated last year, so everything was new.
The beach, that belongs to the hotel, is 5min walk, 10 with small children. On the other hand, hotels that are closer to the beach cost more. So do hotels that have practically everything covered within All Inclusive package.
To make the long story short, for the money I've paid I would gladly go next year again.