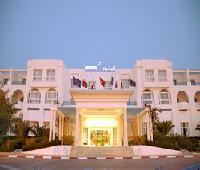 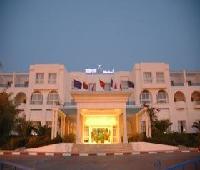 The worst holidays ever

It was the worst hotel I have ever been. We were waiting almost all day for the room which look like room for people. First room was horrible. Dirty, wather was everywhere, vision from room was to the wall. Food was good but there were no plates and no forks and spoons. Dinning room was absolutely dirty. There were enormous lines for food. So we prefered not to eat in this hotel. It didn´t look like all inclusive. Lines for drink and they gave you only1 dcl. No snacks. We went fot a trip to Sahara not to sleap in this hotel. They used disposable crucible more times. Water in swimming pool was absolutely dirty.
Doors to the rooms were like paper, so I was bothered by some man. Only one think what was good was beach and waitors from czech republic.

This has to be THE worst hotel I have ever stayed in!!!! The writing was on the wall really when we pulled up into the Hotel's forecourt and was told by another guest "whatever you do do not stay here"!!!
Food....disgusting!
NO air conditioning in 35 degree temperatures!! We we're moved TWICE and STILL they couldn't find a room where air con worked!!!!! The rooms are disgustingly filthy, damp, humidity, full of mosquitoes....when I asked for it to be cleaned, I was told it had just been!!!!!!!!!!
Reception/Customer Service.... Non-existent, promised you everything and did nothing!!!!!
I have only rated this '1' as the system would not not allow me to enter nothing!!!!

The worst hotel I've ever been

Rooms were filthy, food was terrible... The only one thing that was nice was a hotel beach. However, 2 discos around playing herdcore techno all the time ruined everything...Avoid this hotel like hell!!!

If you are British DO NOT stay at this hotel

Unbelievably bad hotel, not for British holidaymakers whatsoever. I can only echo other people's negative recent comments and don't want to repeat, but myself and my friend have just wasted alot of money and a week of our lives staying in what can only be described as a 'hell hole'. Rude, abrupt staff just made it even worse, together with revolting food as the hotel now caters for eastern European and Russian guests, same slop every day. We lived on bread and butter, ended up buying pizzas from the pay bar, which weren't much better. Every day they ran out of something, drinks, plates, serviettes, bread, cutlery, the list is endless. Rooms were smelly, damp and not particularly clean, the beds were like sleeping on a wooden board. Nothing was cleaned properly, windows were smeary, gardens were overgrown with litter everywhere. I complained to one of the so-called Directors, he showed me 2 other rooms which were both as bad as the one we were in. I challenged him about the poor standards, cleary he wasn't interested and told me if I wasn't happy to move hotels, not so easy when there is no English rep at the resort. Bad, bad place - avoid at all costs. Only decent thing was the weather.....

To start off, the hotel has good location, right by the beach.it also has good facilities (pools and slides) and thats the only plus.
Food terrible and limited, dirty tables and cutlery. Icecream was something like frozen water, disgusting. Waiters rude and ignorant, seemed to be waiting for tips only. Had to buy food outside, thank god there was a restaurant up the road. Never go all inclusive there, waste of money!!!!
As for accommodation it was basic. We stayed in a bungalow-quite small and dark, bit scary must admit. Problems with hot water sometimes and you can still expect some lizards in your room but thats normal. maids friendly and towels were changed daily.

Never go to Tunisia to a 3star hotel, its like 2 in Europe. Always choose 4/5. Remember that african rating is different than european.