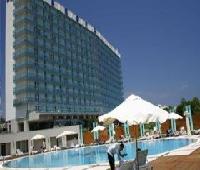 Stayed there for a week. Generally nice place, room was tidy and big enough. In the hotel there was nothing tasty to eat. Beach is near the hotel, rather attractive, only dirty. Also there were attractions for children as small amusement park.

We stayed for one night in this hotel which looked OK in their advertising. When we arrived things looked very different. Although they claim to be a 4* hotel I could not think of more than a maximum of 2*. The reception staff was not welcoming, in fact rude. The beds were terrible and the bathroom had various holes in the tiling while the bathroom fixtures where of poor homes quality not even of a basic hotel standards. We were glad the hotel was only for one night. I would not recommend this hotel to anyone.

We were on vacation in august 2016 in Eforie Nord in this "4stars" complex, wich was actually a maximum 2 stars complex! We wanted to see if it is true what others wrote in their comments about this location, but unfortunately it is!!!
We were lucky we got a room ok (this aspect was very important to us because we had our 1 year old baby with us!), the bathroom was not ok at all, the shower was broken, it leaked. Breakfast was very bad, from 7.30-9.00, therefor impossible for us! On the first day we went for breakfast, very sleepy, we prepared breakfast for our baby, after that we wanted to eat but...there wasn't so much food left! The ladies gave us an ugly look! The coffee was really bad! We went to breakfast only the first day!
The pool was ok the first days, the water very cooold and clean, after a few days it turned green!!!
As a result of a complaint there was an audit at the pool, they took samples from the pool water, it was not ok, we couldn't take baths with the baby in the pool!!!
There were days when the room was not cleaned!
This is the classic communist complex of hotels, like 30 years ago!!!! I won't give it more than 2 stars!!!

The staff is forgotten here on Ceausescu. They have no business with new standards of tourism. You will likely get a room where the smell of sewage is mixed with the mold. Breakfast is horrible. The only thing is somewhat edible coffee. The pool is a hole where microbes are still moving tourists from previous years. Well I only stayed two days.

We booked 3 rooms in June for 3-9 August. When we arrived at the hotel the stuff told us that they have no rooms. I was with the whole family (husband, parents, sister with her husband adn 2 childs) and they sent us at the hotel Cleopatra in Saturn. if I wanted to stay in Saturn I would've choose Saturn. But we wanted Eforie, everybody knows why. I called at consumer protection organization but nothing was done. We went to Cleopatra hotel and when we arrived here were about 50 families in our situation. The television arrived but nothing was done. Was very unpleasant with 2 chindren with us and my father sick. The travel agency found us a last minute hotel in Neptun. The THR resort blamed the travel agencies. After 3 days an agent of consumer protection organization called me and told me that THR resort are responsible for the situation and that they fined them with 20.000 lei.