The Estelar Apartamentos Barranquilla Is Located In The Exclusive Country Club In Barranquilla Offers Guests Accommodation Spaces And Service Tailored To Their Needs. Independent Rooms Efficient Space Allocation And Provision Of Furniture And Full Kitchen. To Others It Has The Services And Spaces To Estelar En Alto Prado Barranquilla A Hotel 05 Stars. 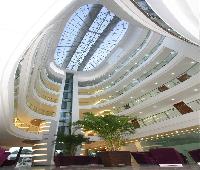 The Estelar Apartamentos Barranquilla Is Located In The Exclusive Country Club In Barranquilla Offers Guests Accommodation Spaces And Service Tailored To Their Needs. Independent Rooms Efficient Space Allocation And Provision Of Furniture And Full Kitchen. To Others It Has The Services And Spaces To Estelar En Alto Prado Barranquilla A Hotel 05 Stars.

Even if the hotel is not too close to the cumbiodromo, is close to the place where the action occurs by night.
Luxurious eniugh, clean, spacious, the staff is very helpful. Cannot ask for anything else.
Definitely advisable.

Not a Great Stay

I had stayed at this Hotel in November and really thought it was a nice place. When I found myself back in Barranquilla I did a Hotel search and found a very nice rate at this hotel. Apparently there is a traditional hotel portion and also some apartments as well. So I took advantage of the promotion which was pay one night get one night free. This was perfect for me as I was in town for 2 days and liked the property due to its amenities and its location.

So I arrived late evening after a long day of travel. I checked in and when the desk representative gave me the total it was higher than I was expecting. The reason was that the they had charged me the 16% IVA Tax. I travel frequently to Colombia and was aware that as a foreigner I was exempt from paying the Tax. I explained that to the desk agent and was informed, while that is true, that it didn't apply to the promotion. I made another attempt to reason with the agent and his response, was that I was getting a great rate and implied that should compensate for paying the IVA. I wasn't in the mood to fight at this late hour as I just wanted to go to bed. So I decided to pick it back up in the morning.

In the morning, I went down and spoke to a different agent and was informed the same. Still didn't make much sense to me but as a matter of principal I was feeling not great.

So about the room. It is a small one bedroom apartment with a small kitchen, living area (no TV) and small utility room, and a nice sized bedroom with a queen bed. The bed was very hard and wasn't the most comfortable to sleep on. After 2 nights my hips were sore due to the stiffness of the bed. The living room furniture was very worn which surprised me due to the fact that this is a high end property.

In the morning, a cold shower awaited me. So I went to investigate and found that apartment had its own hot water heater which of course was turned off. Rather than risk starting it myself, I called the front desk and a maintenance man arrived to start the boiler. I became a little concerned as I started to smell the fumes from the burnt gas. Well, in Colombia you don't have to vent your hot water heater outside, you just have to cut some holes in the door and open a small window to vent the fumes. I opened the door to the apartment to not risk carbon monoxide poisoning. The water heater heated the water while at breakfast and I got my morning shower in.

So not a great stay. Yes the rate was good, feel I was taken advantage of with the taxes since the government says foreigners are exempt, and had to work for a hot shower.

The ironic thing about this review for me, is that the morning of my arrival, the General Manager responded to my stay in November. Let's see how her response is to this review. :)

Well located, but a few things to work on!

This is my fifth or sixth stay in this property, but the first in the Apartments tower, which is part of the Hotel, and this time my stay wasn't as good as the previous opportunities. The hall way in the floor I stayed in was almost 50% without ceiling, because they're undergoing a big reform to correct some water issues, as the bellboy told me when checking in.
The view is amazing but the windows were filthy and were cleaned only when I requested them to do it.

Otherwise, the stay was good and only one night, on a busy Colombia World Cup Qualifier match night, which I assume made it more difficult for the staff to keep everything smooth. I consider it a bit not proper to offer a room in a floor which is being repaired, generating uncomfortable situations for the guests.

Guess I'd go back, but would triple check before checking in.

I stay at this hotel for one night in a two room apartment with a total charge of US$200 as an special weekend rate. We made reservation as it was a two apartment room and it said up to 6 adults and 3 without extra chrage if using the hotel beds. Also said 2 children for free but they charge us.