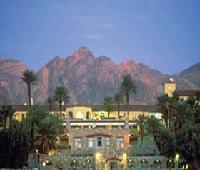 FURNACE CREEK RANCH RESRT,Death Valley National Park,CA,United States of America
Check in 15:00
Check Out 15:00
Great location, pool/golf/museums nice for where we were JimLBoise on 26/05/2017 02:57

Great location, pool/golf/museums nice for where we were

Yes, it is true that you will pay more for rooms here than you would for similar lodging NOT in a national park. But the premium was worth it for our couple of days in Death Valley. Food was good and service was friendly in the dining room.

Stay here for the location only

If you want to stay in Death Valley your choice of accommodation is very limited and this place is about average standard. The room in Block 900 was large and clean, but the Resort, if it should be described as that, is very tired and in need of complete refurbishment.

Dining options are limited to the buffet or the Corkscrew bar, neither of which are of restaurant standard.

Death Valley is an amazing place. Shame the accommodation is not so.

Desert Oasis in the middle of nowhere!

After driving through Death Valley it was great to arrive at the very green Furnace Creek Inn. The spring fed pool is very big and a great way to sooth your aches and pains. The rooms were air conditioned and comfortable.
There aren't many food options here and we just had a snack at the bar for dinner

Amazing resort, location and facilities but rooms a little dated

Passing through Death Valley on a road trip there weren't a lot of options but the Furnance Creek Ranch was a great choice. The location of the ranch is perfect, just about 10 minutes drive from Zabrinske Point, 30 minutes from Badwater Basin and 30 minutes from the mesquite sand dunes. We arrived quite late in the evening after a day driving through the Valley so it was great to be able to get some food in the Corkscrew Saloon - it was busy given the limited number of restaurants on site but food was great (pizza and nachos) with a lively atmosphere. Staff were fantastic and sat down to help us out with some planning for the next day's drive telling us which sites to visit and how to get there.

The pool at the resort is open till 11pm so swimming under the stars in Death Valley was a highlight of the trip. The rooms are spread out across the site and we were in the motel style section of the resort at the end furthest from the entrance. The rooms were slightly dingy and a little dated but for a couple of nights when you're out all day, they're perfectly fine. All round a great resort in a great location with friendly staff.

Nice location, but thats about it

This is a large complex, situated in death valley. You may have to drive for a few minutes after checking if, as the layout is widespread and deep.
We were situated near the horse stables, where the air was quite pungeant, but thankfully in the room itself, no problems.
Hotel is ok, it's not great or anything, but it's more than acceptable for one wishing to spend a night in Death Valley. It gives the impression that the rooms are former barn/stable conversions.
We had a room opening onto the worlds lowest altitude gold course. It was nice and odd to see that greenery in the desert that Death Valley is.
Rooms weren't the most modern in the world, but in this location i guess you don't really expect it. Slept reasonably.
Food, yeah... we chose to do the restaurant (buffet). We were sorry. It was really expensive for the choice and quality of food on offer. I think, that day there were 2 pieces of meat to chose from, both very dry having simmered in fluids for too long. Veg, salads etc were not fresh and we are very little. There is little choice of food in this location, it's a case of eating at this restaurant or at the bar (which was quite rowdy). I have no idea how the food was in the bar, i am only talking about the restaurant here. There is a gift shop online selling snacks, but it doesnt stay open late. There are vending machines offering drinks etc.

We'd booked this hotel in the hope that we would get some good dark, night photography. We got some good shots, but traveling about 10 miles from the hotel, there was still ambient light in the sky. You'd need to travel further to find pure darkness (which we'd expected here). So we were disappointed from that aspect. I should add that the hotel itself is pretty dark at night, so it's not really responsible for the ambient light.
if we were in the area again, i don't think we'd stay here again, it just felt too little for the money, both hotel and restaurant.
Hotel staff were friendly.