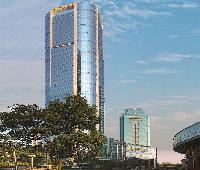 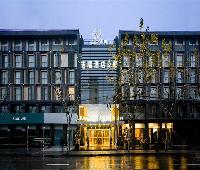 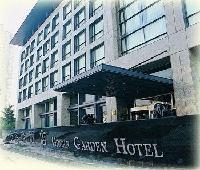 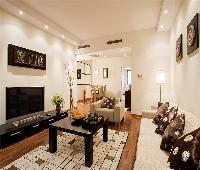 The hotel are well located, near subway station and very clean! But if you aren't Chinese, forget to stay there!
Anyone from the staff speak English, really don't speak!
Everything that I need in hotel, like put air conditioner on, try to have ice cube ( they doesn't have it!) , it was done by a translator app , with very difficult understanding from them!
At list, be far from hear!!

Now the Leisure Inn - Shanghai Lujiazui but still has Yitel towels. Figure that out!

As we were already in China, it was easier to book through a local website which did have an English version.

10 minute walk from the Shangcheng Tube station. It is a straight walk down the Pudong South Road. As you go down that road, you will get to see some of what the local area has to offer from Times Square and other departmental stores. Times Square was all dressed up for New Years Eve celebrations, one of many in Shanghai.

The room was basic but comfortable and a nice clean shower and was inclusive of breakfast. The only downside of the room was that the windows looked like they have not been cleaned for some time and we had a balcony wall right in front of us.

Like many other hotels in China, people smoke and thats all you could smell at times around the public areas and at breakfast.

This hotel also caters mainly to the local market, however it was at a good price and you don't need to know the local language too much to go into a hotel.

The breakfast room was in a strange location, the food presentation looked nice until you ate it when your first taste was mainly salt in the food. Again food catered to asian market but pick the right bits, you can have a good start to the day. Do not expect coffee and tea to taste like tea and coffee back home.

There is a massage parlour under the hotel building and also a restaurant which we didn't particularly care for. A good thing is that there is a supermarket just a couple of minutes away.

Not a long walk to the underground station, even though sometimes it can be confusing but cheap. However it gets you around the places that you want to go in Shanghai.

Three days didn't cover the amount of time that you need and is very worthy of a return visit. I did like the fast bullet train from Jiaxing to Shanghai, about 120km at £3.80.

This was my 4th stay in this hotel. And there are a few changes to last year.

1. No more restaurant/breakfast inside the hotel.
2. The lobby is under construction (scaffolding in lobby and lost of dust)
3. The 2nd floor is getting totally newly decorated

What I find always sad with many things in China, they start nice, and from there it goes downhill fast. After a few years the rooms are incredibility dirty. Bathroom and carpets are only cleaned superficially. The fridge had a thick layer of dust on it, the bathroom had mold and the corners never got cleaned in many years.

No more breakfast room, but you can go opposite to the H Hotel and have breakfast buffet there (RMB 25).

It's the 3rd time I stayed there. First it was an FX Hotel, then a Vienna Hotel and now it belongs to the Yitel Chain. Staff still speak very little to no English.

Rooms are exactly as before. The room key card was still labelled 'Vienna Hotel'. Now all rooms have free Wifi, additionally to LAN. My room was to the rear of Wei Fang Lu. and was relatively quiet.

Breakfast was little improved over the last trip (when it was Vienna Hotel) but overall still bad. Coffee is some sort of sweet instant mix. On the plus side: there is toast bread - on the minus side: there is no toaster oven. Breakfast wasn't in the room price and was RMB 18. To be fair, you get rarely a good breakfast for that type of hotel.

Alternately, there is a small cafe at the corner Wei Fang Lu, Pucheng Lu, about 200m from the hotel that had very good coffee.

I would stay again though. The location is quite good with a few bars and a subway (Century Ave, Line 2, and Shangcheng Rd. Line 9) nearby.

Here you can see, that also for small money you can stay directly in Shanghai Financial Center. You pay less than 450 RMB and have a CLEAN room. THe subway is close by as well all the big shopping malls.
Across the street you directly find a lot of bars and small restaurants also good for foreigners.
The hotel itself is simple, but ok (look at the price!!!!!) So when you come over to Shanghai and have a small pocket, this should be definitely one of your first choices.