Via di Monte del Gallo; 26; 00165 Roma; Italy,Rome,IT,Italy 3 Star Hotel
Check in 14:30
Check Out
Do Not Waste Your Money TravelingCochrans on

The apartment in Rome has 1 rooms and has capacity for 4 people. The apartment has 45 sqm. The accommodation is equipped with the following things: elevator; terrace; iron; central heating; air conditioned in the whole house; TV; stereo; refrigerator; washing machine; dryer; dishes/cutlery are provided. 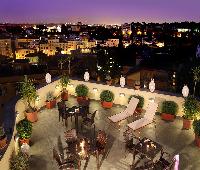 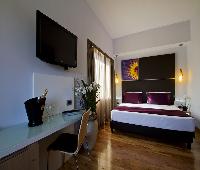 The apartment in Rome has 1 rooms and has capacity for 4 people. The apartment has 45 sqm. The accommodation is equipped with the following things: elevator; terrace; iron; central heating; air conditioned in the whole house; TV; stereo; refrigerator; washing machine; dryer; dishes/cutlery are provided.

Do Not Waste Your Money

We have used HW for a number of years to book our hotels and never have we come across a dump like this. I really don’t like to badmouth a facility, but please save your money and go down the street. The rooms were beyond nasty. It was like they had just shampooed the carpet, only to find out they hadn’t. The entire floors were damp, the whole room was disgusting.

You couldn't pay me to stay here, again!

I travel for a living and have spent some time in hotels. This was, by far, the worst hotel I have ever had the displeasure of staying in.
The front desk staff was rude. And even though there was a sign on the door that read 'Appropriate attire required' there was a young 'man' hanging out with the front desk clerk and his pants were down around his thighs.
The room was filthy and bug ridden. Burn marks on the furniture and bedding. When I went to shut the door, the dead bolt fell out and I had to fix that. There were 3 lamps and 2 of them did not work. I had to use the bathroom light to light the room by night and open the curtain during the day.
There appeared to be a bit of drug deals going on all night long.
I needed to go down to my truck after dark and that was a mistake. I was confronted in the stairwell and he followed me down and physically attacked me in the parking lot. I had to actually punch the idiot in the side of his head to protect myself.
I guess the pool could have been clean but there was approximately 50 people in and around it.
There was wifi available but it was spotty, at best.
You could not pay me to stay here, again. I would sleep in my vehicle before staying there.

Rooms were clean and comfortable.Very Friendly hotel staff. Also had a blast in the lounge. I would highly reccomend to others. I will be back. I had to change my room because of the neighbors being loud, but it was a prompt service and I would have to say the nicer part of the hotel.

Not a Family Place.

We travelled 7hours to Morgan City for family a vacation because it was a central location for things that we wanted to do. When we arrived we checked in and in the matter of minutes we promptly checked out. The kids suite was full of fleas. Our rooms smelt like mold or stagnant water.

Don.t stay in this place

I stayed in this place for one night ,and left the next morning.The maid said I did not check out ,but I was gone before 11 am.I was charged for two days.The lady I spoke to insist I was still there when I wasn't.A RIP OFF.