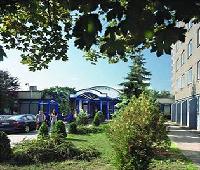 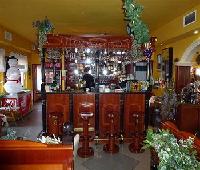 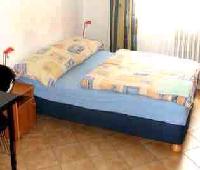 "Average" is the right word

It's like student college hotel but if you want to stay in Budapest for Sziget festival, this is a right choice... It's quite far from the center of Budapest but buses or trains are going there very often...

not the best hostel

we were in this hostel for one night. The Room was ok. It was clean and the room was big. The parking place was ok and safe. The Breakfast was terrible. the bread rolls were dry and the sausage uneatable. it was the worst breakfast we hab ever get in a hostel. For one night ok, but not more!!!!!!!!!!!!!!!!

Nice and ciep hotel in Budapest

It was a surprise that a clean hotel and rented room to be enough large and convenient looking to different aspects.

Far out of town in N. Buda. To get there by public transport take bus 200 or 93 outside Ferihegy airport to the nearest blue M3 Metro stn at Kobanya Kispest (10 mins). Go to Deak F. ter (10 stops) and transfer to the red M2 line, two stops gets you to Batthyany ter where you transfer to the surburban green HEV line. Any train will do as they all stop at Bekasmegyer (10 stops) where you get off. One can either catch a 145 bus just outside the stn. (same side as the platform you get off) which stops outside the hotel (two stops) or hoof it for 10 minutes to the Hotel Touring, (turn right outside the stn. go to the second left which is Punkosdfurdo Utca (Alfa Romeo, Subaru, Kawasaki dealership on corner). All the rolling stock is dated and look real klunkers but don't be fooled as the system is most efficient, has frequent service (literally seconds after arriving on platform), direction indicators on stn. walls so you should not go the wrong way and rapid escalators. There is always the mini bus or taxi from the airport but you will pay! Hotel blurb says 2 kliks to city centre but it is actually over six miles out! Hotel situated on an estate of grim 10 storey apartment blocks but is OK when you enter the lobby. Staff were fine and spoke English very well in most cases. Good elevators. Boomy corridors could be a pain if other guests decided to have a chinwag outside their rooms or closed a door sharply. Rooms were large, beds firm (two singles together with the occasional 'twang' from my mattress). There was a seat in my room which obviously doubled up as a third bed and it was heavily urine(?) stained. I checked the mattress on my bed but it was OK - the third bed probably for kids? Bed linen and towels OK, I had to use a shared bathroom but it was cleaned every day and the shower was good (bring your own soap). Breakfast very basic, fresh rolls, processed rubber cheese and seven or eight slices of assorted salami style meats served on a plate (I only had one morning with buffet style but no croissants or juices though). For my four mornings at breakfast (0800) I was the only person in a restaurant for 100 bums and I know I was not in the hotel on my own! The coffee was something else - dispensed out of a Nescafe machine it was just coloured water and there wasn't even a coffee smell to it. I like mine black and I tried every combination to no avail. Next the teabags, all fruit flavoured except for Earl Grey (also foul) and I couldn't drink any of them. The small bar was OK but only four tables (£1 for 500ml bottle of local brew - very drinkable) and smokers are welcome. All in all a decent place to stay if you just want to put your head down and are not too fussy but let down badly by the breakfast. There is a McDonalds to fall back on if it gets too bad (back up the road and turn left by the Alfa dealers and its a hundred yards away) and there is even a London Transport Routemaster parked in front to make people feel at home. Though the hotel is way out of town it is almost next door to the extensive Roman ruins and museum at Acquincum. Budapest itself - I had mixed feelings. I found the main shopping areas clean enough but away from them the city was very seedy and dirty with gutters and footpaths unswept and evidence of dog lovers everywhere. Road traffic was heavy and there were a lot of trucks passing through especially on Erzsebet/Jozsef korut I suspect they are channeled that way but that road was three lanes solid. Not a city that I particularly want to visit again.

too many german school kids

we stayed at the hotel touring for four nights at the beginning of june. it was very noisy and we hardly slept due to the fact it is very popular with schools. There were two german and one polish school trips taking place during our stay. Groups of over excited teenagers insisted on riding up and down in the lifts all night, banging doors, drinking and shouting until the early hours. I would not advise this hotel if you are looking for a quiet break. It is also a 20 minute train ride from the centre, not the 2km that it would claim.