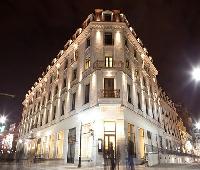 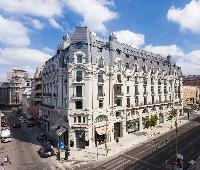 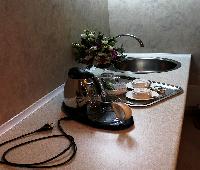 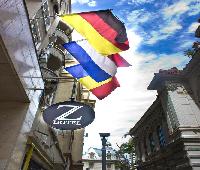 Would recommend you avoid

My girlfriend and I were completely underwhelmed by this hotel for several reasons. Though the hotel has a fine location you have to walk through a smelly, dark corridor to get to the "front door". Advertising itself as a three star hotel, the bathroom didn't have any soap, shower gel, or shampoo. When we asked for some we were given two plastic drink cups - one full of shampoo, the other with hand soap. The room itself was small, had a TV that didn't work, light fixtures that didn't turn on and almost fell off the wall, and a strange smell. The breakfast in the neighboring cafe was mediocre at best. But, to top things off, there was a problem at the front desk when we paid. They scanned my credit card and I hit enter on the machine (without entering a PIN number because there was no prompt to do so) and gave it back to the lady. She insisted the transaction didn't go through. This happened twice. On the third try I entered a PIN and she said it had worked. When I checked my bank statement three days later I had three debits. I sent a few emails to complain and was eventually refunded the money (kind of). They refunded me the amount in Romanian currency which had changed in the last week. Each credit they refunded me was around $4 CDN short of the debit (x2 transactions = roughly $9). I realize that's not a lot of money, but it's the principle of the issue. When I asked for them for the complete refund I was refused and have since been ignored.
When we returned to Bucharest a few days later we stayed at a hotel down the street, less than a block away. The room was beautiful, 3x the size, with a great breakfast, functional TV, and toiletries, all for only a few dollars more.
I would recommend to everyone to spend the extra $10 and never stay at this hotel.

Nice place close to the center of the city

It was a great place and the price also good. This hostel is close to a lot of restaurants, bars, disco and the historical buildings in Bucharest. The staff is very good they are speak english and every day the room are clean.

The hostel is a bit dingy but the rooms are spacious and comfortable enough with various nice touches like a fridge (with minibar), air conditioning and a TV. The staff varied in their friendlyness but all spoke English. Altogether the hostel is well located but leaves something to be desired (to put it lightly), was not dissapointed with the experience over all but obviously wasn't a 5* hotel. Rather overpriced for what it is too.

There was also building work going on in the early morning next door so the sleep quality was poor as a result.

This place should be shut down

It's unbelievable how bad this is. First, the fotos lie. They were modified poorly in Photoshop so they erased the sign saying the building is a first class category for seismic risk. It could fall and anytime. The hall is Grimm and stinky, the staff smokes all the time and is rude, the rooms face each other so no fresh air for you. Don't let the curtains fool you. There are no real windows. The noise is unbearable so no sleep. The staff will wake you up at 7 with their loud TV and phone talk on the hall. There is constant construction noise even on weekends. It's deceiving, dirty, expensive, rude, tiresome. Waste of location. Don't go here

Great location but a bit grim

Positives: theres a fridge in the room with coke and water in and theres also a coffee machine and tv. The location is perfect. Free wifi.

Negative:There were no windows in my room and it smelt of toilet

Tip: the grill restaurant next door is good but service is very slow.