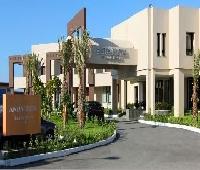 Nice to look at but very cleanliness very unpleasant !

The hotel looks very good from the outside. We were given a suite for five people when really it is suitable for Four. The rugs have not been hoovered, not even brushed. The dirty bed mattress cover does not get replaced by new clean ones just covered with new sheets. Beware of the bed bugs!!! The towels do leave a lot to be desired. The cleaners are very poorly trained and do the minimal to clean a room. The food is adequate. The beach behind is fantastic.

Promising when entering hotel as clean and smart. Booked two double rooms but because one of us travelling own they decided to move to a single room with no reduction in Price. AIrcon, tv and wifi not working in either of the rooms and staff not very helpful in rectifying. One towel in the rooms, old soap left from previous person, food expensive. Staff not particularly helpful. So in short - avoid!

I stayed one night here on a recent trip to Tunisia. The rooms were very spacious and more of a small apartment. Whilst there was a cooker there were no pans? The room was very plain and the decor very tired. Since the revolution, times have been hard in Tunisia and are only just recovering, unfortunately the Nour was suffering as the resort was very quiet. There was no AC on in the reception, bar or dining room, which made it very uncomfortable. A request for a beer was declined at the outside bar in the afternoon but I am unsure why. It may have been Ramadan or just closed but food was available. As we finished our meal, the table next to us received beer and wine! This review is based on the situation in August 2012 and things may well improve as the country gets back on its feet and the tourist return. The other aspect is that this resort is predominately French, so take that as you find it.

Nice on the outside but generally poor

Positives
1. Nice location by the beach with a nice pool but watch out for all the wasps
2. A very friendly and helpful receptionist on the afternoon shift
3. Secure car park
4. Free wifi around reception
5. Has a small playground for children
Negative (a lot)
1. Rooms are really dated
2. List of things that don't work including a missing tv which we had to ask four times to get one. Hair dyer, outside light, telephone did not work
3. Breakfast was pretty bad with almost undrinkable coffee but might suit depending on your taste.
4. Foods at restuarant is disappointing, service is appalling. Price is reasonable if the food was betyer. Mains and starters came out the same time
5.air conditioning is only in the front room and doesn't really reach the bedrooms
6. They appear to like the English.

We are not being picky but being truthfully honest with our opinion and want to shef light to those who are thinking of booking at this hotel. But if your just looking for a bed to stay, this isn't terrible.

We arrived in Bizerte with no reseration so set about trying to find a hotel for one night. We aimed for what the Lonely Planet referred to as the Tourist Zone but that seemed to be stretching the term somewhat- there wasn’t much there. Between the Tourist Zone and the City Centre, off a side road we found two new hotels, The Nour and another which I believe was called the Andalus. I tried there first and was told by the receptionist that there were no rooms available…however if we stayed more than one night, there could be!? How that works I don’t know so I left and went to the Nour next door.

I liked it as soon as I entered the stylish open plan reception looking out to a nice big pool and the beach and sea beyond. I was shown a room which was a bargain at 116 Diram (about £45). The room had a balcony and looked over the pool and to the sea. It was a good size and was actually an apartment with fridge and cooking facilities. It was modern, light and airy and very clean. There were also a number of swallows nests above the balcony and it was nice to watch the birds swooping in and out of the nests (good for keeping mosquitos down too).

The hotel was quiet and we were able to enjoy the pool with only a few other people present. The beach is through a security gate and across a scrubby dune but was very nice- one of the best we saw in Tunisia with a nice clean sea, and not too crowded.

We ate at the hotel at night and the food was Ok and service was good. Breakfast was included in the price, was buffet style and we probably didn’t see it at its best as we arrived around 9.45 and it ended at 10- therefore it was nothing to get too enthusiastic about.

Bizerte itself is a low key place that doesn’t seem to attract many overseas tourists. It has a very picturesque harbour overlooked by a Kasbah though and was one the most scenic spots we saw during our trip. The harbour is lined by cafes (no alcohol as is the norm in Tunisian towns away from tourist resorts) and is a nice place top spend an afternoon. The Nour is about a 15 minute walk from the harbour.

In summary, this is a really nice hotel -good service, nice rooms and facilities and well situated. A good price too. Recommended.