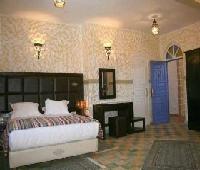 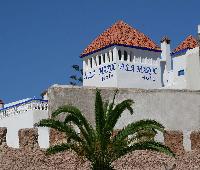 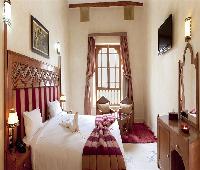 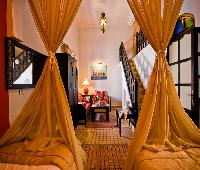 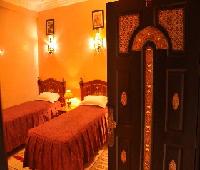 I stayed here on a cycling trip as it was a good base, but it is rural so unless you have your own transport staying in the centre of Essaouira would be easier. In February I was the only person staying in what is quite a large hotel. So despite paying the full rate, the pool was unavailable, water for the shower only in the evening, and the electricity turned off in the middle of the day. Breakfast is apparently provided but they could not offer anything before 9 am. Only French spoken.

Getting a taxi to and from Essaouira (for the evening when I didn't want to cycle) was easy but be aware that the price changes from 7 DH in daytime to 37.50 DH at 9 pm.

It's an absolutely gorgeous building but could do with some more guests so the facilities are available.

We booked by phone 2 rooms for 2 nights during the music festival.
The day before our arrival the owner called us to inform us he cancelled our reservation because he had a group that wanted to book the all riad.
The worst was his reaction when I asked him at least to help us in finding another accommodation as Essaouira was fully booked for the festival...
He told me: "this is your own issue" and he put the phone down.
Absolutely to avoid this place.

When we booked this hotel we were assured it was in the center of essaouira, we found to our dismay, after several taxi journeys, a long walk, and the kindness of a French lady in a paper shop that it is 6km from the centre (the clue is in the address I suppose).
When we arrived we were greeted exceptionally warmly, as it appears they weren't expecting us. We were shown around the riad, which is simply sumptuous, with a charming pool area. A shame then that we were the only 2 guests in the 30 rooms and we were followed everywhere by a sinister, silent, half naked child.
Getting into town was a nightmare and in the end Ahmed (one of the may staff who appears to live there) gave us a lift. Getting back from town was worse, as despite a map and directions in Arabic, many taxi drivers wouldn't go there as they had not heard of it.
Another member of staff was on reception by our return that evening, and seemed confused and slightly amused that we were staying there. We were locked in our room at 9.30pm, hiding from the scary child and over friendly receptionist. There was no air conditioning, I found an abundance of long blacks hairs between the BLANKETS on the bed, and the pillows smelled of damp. Probably as there was a large patch of it on the wall. By morning I had 32 mosquito bites, nothing to do with the riad I understand, I just want you all to share my pain.
It was near impossible to communicate with staff as (according to them) they spoke every language except English (although the site we booked it on claimed they did). This resulted in us getting a 3 course breakfast with enough food for 16 people 45 mins after we had polietly declined any food and asked them to please book us a taxi as we were leaving a day early. After another loooooong discussion about payment, we ended up standing in the middle of the road to flag a taxi as they seemed incapable of arranging one, and couldn't understand why we would want to leave the riad and go into town at any point.
Because we were scared of dying, that's why.
A beautiful building indeed, but the mose sinister place I have ever spent the night!

Taxi's drive by but are always packed with people as this Riad lays in between two villages. Busses go on certain times and seem to be strict so ask the reception. Apart from that, we have been picked up a couple of times by people passing in their cars. Friendly Maroccans mostly and the French woman that has the restaurant opposite of the Riad.

The staff is overfriendly and very willing to make your stay as good as they can get it for you. When we arrived it was quite empty and we got the biggest room in the Riad. A clean and spacious room with a large balcony. Breakfast is on the patio and is what you get everywhere in Morocco. No surprises but okay. Staff was very friendly for our 3-years old daughter. No single negative point I can mention on the staff in the 7 days we stayed in Damonte.

Staying here is possible without having your own transportation. If you have however, this is a very nice spot with good value for money. For sure recommended.