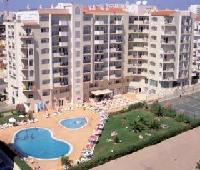 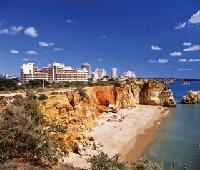 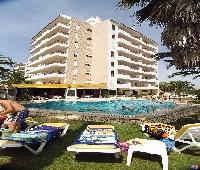 room was above the bar and pool area .. the double glazed doors did not emit all the noise when shut .. the sink smelly when other apartments used their sinks .. food was poor and with no imagination .. staff in the bar were often absent .. leading to frustration

Had a week at this hotel,Stayed all inclusive....more inclusive than ALL !!! the holiday didnt start well, the shuttle bus driver was having a bad day ! After a head on near miss my wife got worried about his speeding! out came the satnav on my phone that has a dash cam on it,got video of him doing 96mph!!with six of us in the back !! it was then that he pulled out on an island in front of a moped,that crashed into the side of us!!! luckily the guy wasnt badly hurt,, the hotel is set up to cater for anything from self catering upwards,Think it was worth the £7 a day extra!! but believe me it was only the drinks that made it worth while,the food (thats all of it) was bland repetative and always cold,,As an electrician myself it was frightening! the electric toaster was worn out so they had a metal pair of tongs to ferret about inside it to get your bread out !ELECTROCUTION doesnt happen in Portugal !!!!!! Strange thing was the paying guests ate in a different area to the rest!! unless the waiter fancied you then you got to sit in the privileged seats,, On the whole the staff were friendly and helpful Thanks especialy to Marcio and Nelson who were great,, If your not French the Animation team prob wont talk to you but thats not a bad thing,wish they`d had a bit more control over the ferrell kids who constantly ran riot around the pool kicking footballs across it ,not good with tables glasses etc,as previous reviews your 2 miles from anything ,apart from the beach thats about 5/10 minute walk but is lovely.If you like a good nights sleep on a soft double bed with soft pillows and air con that works then this place isnt for you !!Would i go back....No chance....

Stayed here as a couple between 28 June and 5th July. Fantastic room on top floor room 802. The hotel was clean and the staff friendly. Breakfast was mainly continental but a lot of choice. Lunch and dinner was good with lovely salad options. Not too far to walk into Praia de rocha, about 15 minutes along the main road. Vau beach was beautiful. Alvor was nearby which is a lovely fishing village, it was easy to get to by bus , do not go by taxi, it cost us 8 euros by taxi to get there but was only 1.50 euro to get back by bus. Definitely recommend this hotel even though there were a lot of French people there. The only downside was that a lot of people and children from the hotel Praia de Vau at the back were using the pool and hotel too, so often the pool area became crowded. Ask for a room high up, there are brilliant views.

The Hotel
The Hotel was scrupulously clean throughout. The cleaning process was constant and effective.

There were some nice 4 star touches like anti-slip strips built into the marble stairways and hand sanitiser at the entrance to communal toilets.

The hotel was situated about a 10 minute walk from the beach.

Much evidence to suggest that the hotel was well managed.

The hotel was staffed by enthusiastic, friendly and efficient people.

Probably about 90% of the guests were French. The rest being a mixture of British, Irish and Portuguese.

Accommodation
Our apartment was bright and spacious with plenty of storage (and a full length mirror!)

Very large balcony overlooking the pool and with a sea view (also a discrete drying rack).

The Wi-fi was strong and available throughout the premises, including poolside.

The Television was the best ever, with plenty of English and American channels (some with Portuguese subtitles).

Furnishings were generous and very comfortable.

We also had a bed settee and a couple of bunk beds.

Kitchen was fully equipped including dishwasher and fridge.

Service
Reception always had staff on hand who were happy to help with any query or advice.

Our apartment was immaculately cleaned and tidied every day to a very high standard.

The staff never seemed to stand still and the service in the dining area was quite amazing.

Dining
There was a dining room, for 'All inclusive' guests and a Restaurant for others but they both offered the same food.

Although it was help yourself buffet style the staff were peerless when it came to supplying wine as requested, clearing tables and topping up food.

Staff were again helpful and accommodating when we found the 'inclusive' wine unpalatable.

We were offered a limited but adequate wine list. At €14 for a good bottle of Vinho Verde it seemed worth while.

Lunch and Dinner were virtually the same.

The usual cooked breakfast was available.

The wine came in a jug/carafe and was of Red, White or Rose but was pretty poor quality unfortunately

No 'help yourself' ice cream but if requested a small portion of chocolate or strawberry ice cream would be cheerfully supplied.

Animation / Entertainment
We are not normally enticed to participate in organised activities around the pool but on this occasion there were members of the team who were so friendly and persuasive that we both got more out of this holiday than we have had for a long time. It was great fun. There was one exception and that was a large imposing French girl who took over the only lounge/bar area in the hotel with a microphone when we would have wished for a quiet pre-dinner drink. She would reappear after dinner, again shouting and invading the entire lounge facility.

There was an excellent local singer/guitarist who entertained in the later evening but he was interrupted by a rather distasteful captured display of captured animals and birds.

Conclusion
Portugal is a great country for good food and in particular Fish dishes. The food in the hotel was disappointing as was the wine. There was, however a great atmosphere in and around the hotel, perhaps the more than usually exotic clientele ( Vive la France!) added an extra 'piquancy.’

In respect of our 'All Inclusive' package it seems that every hotel has its own interpretation of this term. We don’t like that. We don’t like separation or marginalisation. Alvor Harbour has many excellent restaurants just a €8 taxi ride away. Our advice - use them. Our package was certainly a bargain and we did get our money's worth. We enjoyed our holiday enormously and would like to thank the hotel staff, particularly the attentive waiters, with a special mention for those members of the entertainment team who played a key role. All in all this package has been one of our best choices. We experienced a "holiday" in the true sense of the word, including the travel with Jet2 and the relaxed, happy atmosphere in the Vau Aparthotel.

DO NOT GO HERE! THE FOOD IS DISGUSTING!

DO NOT book this hotel, unless you are self catering! (Also, do not expect it to be in Praia da Rocha - it's in a very small place called Praia da Vau.) The hotel itself is nice + very clean. Rooms are cleaned every day, along with clean towels + sheets changed twice per week. Prior to my visit, I read the review by Vanessa D (27 May 2017), and, as I have been to approximately 8 or 9 all inclusives before, with no problems, I thought that perhaps she was just being fussy - NO, SHE WASN'T! She hit the nail on the head - the food is processed + poorly made - e.g. the "scrambled" eggs for breakfast had to be cut into chunks because it was a solid mass, the fried eggs were cooked then left on plates to go cold, until some unsuspecting person came along. The "hot" food was NEVER hot! I went with my sister - we had never been on holiday together before + had been left some money by our late father, which paid for the holiday, so this was special for us. I am a vegetarian and lived on salad + fruit all week. My sister is not a vegetarian or a fussy eater, but she struggled to find something edible, amongst the overcooked, processed crap! This, without doubt, spoiled our holiday - we were upset that our late father's hard earned money had gone to pay for such substandard rubbish! Obviously, I complained to the holiday rep, when she FINALLY turned up after we'd been there FIVE DAYS! She said that she could downgrade us to B&B and we could eat out, but we hadn't taken enough money (never having experienced this before) + she couldn't provide any cash up front, to pay for us to have meals out. On the plus side - it's the only holiday I've been on when I haven't had to diet when I got home - I actually lost weight!! Vau, is pronounced "vow", which is ironic, because I vow to never go there again!!