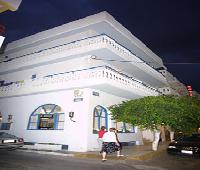 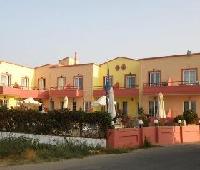 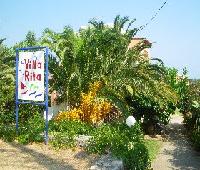 Good food and nice staff, but rooms need some sorting

Just returned from 10 days at the Iro.
Couple of initial problems - we'd been assured we were on Half board, but hotel only had us down as B&B, and then we were initially put in a twin room instead of a double, but the staff at the hotel were really good to sort these issues out - half board was arranged, and we were moved to a double room as soon as one became available - and it was a lovely room with a sun terrace too, so very pleased with that.

Rooms themselves could do with updating as the fixtures and fittings were certainly not at their best - all of the showers in the hotel seemed have had the mountings for the shower head missing (both rooms we stayed in and the room for the lobby), so you had to shower with one hand until we found some cable ties and knocked up a fix. Some probably wouldn't meet UK safety standards, like the covers broken or missing from the drain holes in the showers (watch where you put your feet), and the planks of wood holding the bed base up - bit wobbly so careful how you sleep, but the rooms were very clean, and had plenty of space.

Public areas looked like they'd been updated recently, and both the lobby and restaurant were really nice places to be - free WiFi in the lobby was a real bonus.

Pool area at the back was also very nice and clean. We only used the pool once as it didn't seem best placed to catch the sun - nature of the site that it doesn't get any sun until late morning, and loses it by mid afternoon. We were out every day anyway, so not an issue for us.

Food in the restaurant was really nice - not a huge selection, but this is a much smaller hotel than we usually stay in so wouldn't expect a huge range. Breakfast included cereals, greek yogurt, cheese, cold meat and plenty bread, salad and oranges, as well as fruit juice and tea / coffee. Dinner also had salads, always a fish dish, a meat dish, rice, pasta, lovely baked potatoes, and other vegetables, and usually sponge cake, and watermelon for desert - also did a lovely cheesecake a couple of times. All the food tasted lovely, and there was certainly plenty to fill you up.

We didn't make much use of the bar, but what we had was good.

All the staff were really friendly and helpful, and did their best to ensure we had a pleasant stay.

The hotel is located on the main road through Hersonissos, but we didn't find it particularly noisy. All the shops and beaches, bars, restaurants etc are within easy walking distance, but if we visited Crete again we would probably look for somewhere at the western end of the island, as there seems to be more places to visit in that region - depends what you like to do on holiday, and we like to visit castles and old towns etc - this area seems more suited to swimming in the sea and eating / drinking, although we did take tours to Spinalonga Island and the Lasithi Plateau, and Heraklion and the Minoan palaces at Knossos and Malia are only a bus ride away, which were very interesting.

Hersonissos would probably not be somewhere we would visit again, but if we did, we would certainly include the Iro Hotel in our shortlist of where to stay.

Room service: not sufficient, they come every 3 days, make your bed sheets (without changing them i believe) and quickly clean your floor and toilet, and middle of balcony floor ignoring corners, but who cares about balcony anyway, you wont spend much time there anyway, if you will find yourself like us, having great view to the rooms and balconies of neighboring hotel... in addition they will change your towels (we got first room service after 4 days when lady changed just 2 out of 4 towels, although they weren't cleaner than those she did). Needless to say, you should use your beach shoes also inside your room, which will mean you will have dirty floor in first five seconds after you enter the room.
every showering will cause you little bathroom flood like people mentioned before me but you can get used to if you have your shoes on. few times we saw bugs co-residing.
Food: variety of salads, always some fish dish, more kinds of meat, feta cheese, greek olives, always watermelon and grapes for dinner and oranges for breakfast and something sweet which they change every evening.overall, they offer every day the same wide options, so despite the variety, you can get tired of it eventually. plus site is you can eat all you want, you have always 3 hours for it:).
Reception stuff: two women, who were really nice and eager to help.
Beaches: closest ones were small and too crowded, even out of season, but if you dont mind walking bit further you can find yourself decent ones.
There is great coffee shop very close to it.
I would give IRO between 2-3 stars.

Just arrived back from a week at this hotel in Greece Crete: firstly lets just give a big thank you to all the staff who work there in Iro Hotel, they are very friendly and we fell like at home all our holiday!
The hotel its self was very good room and was clean and maids came in everyday !The restaurant was really good we stayed half board and didn,t go hungry once always plenty to chose from. especially teisty greek food .Breakfast was good as well,we never saw anything run out the pool area was the business always plenty of sunbeds .We booked a sea view which is worth the extra as the view is stunning as the hotel is set high.Just be aware you do get slight noise from the road further down from the hotel but not enough to spoil anything we seat out in the evening with no problem..We would go back to this hotel again.As a lot of holiday makers were repeat stays not just once but year after year.Finally the hotel is very European so you get a lot of nationalities.Which didn't bother us all were very friendly

I was in the hotel for a week and I was really satisfied! It is a two-star hotel, and I have to say that it fits the criteria and generally goes over them. Rooms are small, but clean and mainly they have everything you need for a holiday. No stupid stuff you don't need; as well as free internet and quite fast so take a laptop/tablet and you can have your small entertainment spot. The stuff is friendly (be aware English is spoken here, other languages can be a little bit trouble). Food was all right and there has always been a good selection and in a very good quality. Be aware drinks are not part of supper/dinner, only with breakfast!

i was with my husband few weeks ago in dies hotel. for a 2 stars hotel we didnt expect more. the food, even it was not so much to chose,it was good.the cleaning wasnt so wow but ok.the service we didnt like it so much.almost everyday we had to wait to get our key back from reception when we came back from the beach because the young woman there was missing. after dinner we went by the bar but she wasn't so nice to ask our if we want drink anything,even we were sitting at the bar. weird!we had to wait for Florien from the restaurante becase the girl was verry busy with her mobile.We thought maybe she has something against us,it looked like she saw us by the bar and she didn't come ask if we want anything to drink there.my husband said maybe because she is lazy, she always speak so slowly,moving slowly. we could sleep wel,only in the early morning was a big noise on the street, every morning.