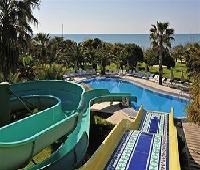 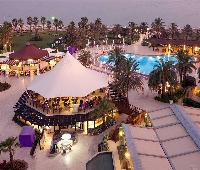 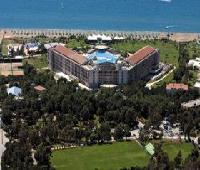 We went to this hotel due to the unpredicted situation. We've booked another one in Antalya but it turned out that it was overbooked so the tour operator sent us her.
First the only thing I was happy about is that Jacaranda had sand beach and also the sand title build their nests here and they're protected. That was nice and cute.

Staff
As it turned out Jacaranda was the tour operator sponsored hotel. The local stuff was quite friendly but sometimes had a tendency to suddenly disappear. The woman who was responsible for the Luxury part of the hotel was mean and looked like a Cerber at those who are not "Luxury" and moreover was making people from Luxury go sit where she wants. That was irritating.

Territory and pool.
That was perfect. Several pools, palm trees, banana trees and some kind of fir trees, sandy beach, clean water.
But what's with the noise? We thought it was some kind of "white noise" to keep the insects away. But sometimes you could see huge night butterflies lying on the floor with no head. It was only in winter when I found out those were cicadas who were having their mating period then. And the sound - that was their songs.

Beach
Nice and clean. Showers available. There was a volleyball field. Beach bar is close.

Food
Our tour was an ultra-all-inclusive one. But the food was quiet monotonous, nothing compared to my previous experience in Turkey.
The hotel has several restaurants a la cart. We had a wedding anniversary then and decided to go to one of them. Only one was available - a Turkish one. We started to search for it - but what a miracle! Turkish a la cart was just a beach bar which in the evening turned into a restaurant. There were both waiters who brought champagne and self-catering. That was awful and the mood was spoilt as the food was even worse than in a usual restaurant. We complained and management asked us to go to the Fish Restaurant. The food there was a bit better.

Nota Bene:
They say that hotel is situated not very convenient for the excursion buses to get there so you might be left in a hotel instead of taken on a tour (as we were).

There are a lot of Russian people, so if you're a fan - please, visit. We didn't enjoy this fact.

The name luxury is not for this hotel. The new buldings and rooms it seems to be luxury but all around - restaurant pool area are dirty. During our stay we can not see any manager who checked the service. Look at the picture.
The main reataurant is full of chaos, many times there were lack of coffes and fresh orange juice. This restaurant is too small to give the right lavel of service.

No non-smoking areas for children (or adults)

The hotel positions itself as hotel for families with children. The problem is administration does nothing to create non-smoking areas for children (and for adults as well). No Smoking signs have not been installed in baby club, or anywhere in the hotel or on its grounds.

The hotel runs disco for children in the open air in the evenings (8.30-9.00pm). Each night there are always several very bright people who want to sit under night sky, watch children dance and smoke one or two cigarettes....

I approached Guest Relations girls of course to ask them why don't they install some No Smoking signs or ask whoever is running children's disco to say it from the stage that this even is for babies/children and smoking is not welcomed. I even mentioned that each time I see smoker at children's disco I usually approach this person to tell that there are bars in the hotel where adult people drink whiskey and smoke, but this is not one of those bars, it is children's disco!

Guest Relations girls were kind enough to start telling me that I'm approaching smokers in the wrong way and that I should do it differently. Unfortunately I was not in the right mood to listen to negotiations skills training that they were about to deliver so I will not be able to share those valuable details with you.

I suggested that if they try to do something about it I will not be leaving this feedback on TripAdvisor. As you are reading these lines you can guess what they did about my complaint.

By the way, as I was leaving Guest Relations  another parent approached them to say that there are many smokers around baby pool and asked if they could do something...

Not what they advertise

The Jacaranda is basically two hotels in one. They expanded a year or so ago and built the pool bungalows in the part that is now known as the Jacaranda Luxury Beach Club. We stayed there, and to be honest the pool area and the spacious, modern rooms are top notch and really worth the extra money. If after reading the remainder of this review you decide to stay here, I recommend booking one of those rooms (offered as Deluxe Rooms when booking) since it grants you access to all of the areas and bars and comes with a free cabana at the beach as well (sadly they are first come first serve, so lots of them will have towels and no people inside for the whole day, but more on that later on).

It's a bit of a shame that you get to spend so little time in the room because there's just so much to do here. There are at least six pools (one with a bunch of small water slides) and just as many bars, a club (which was suprisingly big and I guess in the main season with lots of people there pretty good). There's a spa as well and on the beach you can rent various sports equipment (prices are pretty high though). Plus they have some small shops with touristy stuff.

The food in the restaurants is okay. I didn't like the buffet much but we went to four of the a la carte restaurants as well (you can go for free to each one once while you stay here - just don't think they are 'a la carte' in the way most people understand the term; it actually means you just get a pre-defined multi course meal). Those restaurants range from okay to great. I especially recommend the Japanese one which is just an amazing experience.

The crowd was mainly a mix of Germans, Russians and Turkish people. Staff speaks usually at least one of these languages and a bit of English.

So why three stars and not five? There are a few things that could be better, and some major disappointments:

- When arriving it would be great to get some information about what you can get where and what is included and what is not. We were brought to and explained our room and that was that, but the resort is big so some orientation would be great.

- Annoyingly, lots of people place their towels at the pool or the beach first thing in the morning. Since there are lifeguards and hotel staff around they should actively manage / prevent that.

Those are the minor complaints. Here's the 'big ones':

- The website and the hotel description of our place of booking were not up to date. Some of the services listed (like free room service during the night, 24h bar, daily mini bar fill up and so on) don't exist or don't exist anymore. Pretty much all of the great sounding things don't exist.

- One of the things mentioned on the website does exist: Room service for free pizza from 7 to 10. However you wouldn't know since this isn't mentioned in the hotel information in the room and was only confirmed to us by guest relations. And obviously there's no menu around so when you call to order and they only offer very specific pizzas, that just makes this hotel look a little disorganized.

- The deluxe rooms come with imported (instead of only local) alcohol for free as well. But that's just blatantly not true and false advertising. The barkeepers use the cheap, headache-inducing alcohol anyway and want to charge you for the rest or just don't offer it at all, even if they have it there on display and even if you order it specifically. The good stuff seems to be only decoration.

There was a major disconnect between what we booked and what we got. And it isn't the travel organizer's fault only. The false claims are on the hotel's webpage to this day. Except for the deluxe rooms this is no five star hotel at all. I don't recommend it.

We were four couples, and we choice jacaranda luxury club:
1. Swimm up room was new and clean, The area was great etc
2. The staff personel in bar and restaurant very very low, not frendly, no profesional, without exprerience.

It supost to be our perfect honey moon, but staff destroy it whith 100 rules like in college.