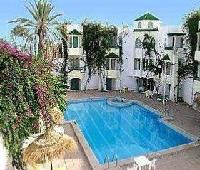 Nice rooms, warm weather, perfect weather,... Oryx is the best animator in Sun Club Djerba. He has soooo much energy, we really love him. We had very nice holiday here in Djerba. We will come back I promise.

We were together with my husband on our first trip to some warm counrty. It was so great that I can't even describe it. The staff were very polite, they even learned Russian for animation and communication with guests, because 2016 was the first year when the hotel began to work with Russians. So they got prepared. The most tourists were German and French. The main building was full of Russians and others because the rooms there were cheeper. The Russians behaved badly, so my husband and I were shoked - it was a great shame! We just got aquainted with other couples from another city - we are from Moscow, and the guys were from Nizhniy Novgorod. And we had our own company - we tried to be as far from other Russians as we could. When it was time to get the keys people from our transfer bus I thought could break the reseption. We waited patiently in a line, tried to speak French, we were polite and surprisingly gor the keys from one of the best rooms! it was in the area with low buildinds with only two floors and five rooms in each. So we got our oun terrace and a little garden with the path to the swimming pool! And our personal conditioner! We had a perfect room! Thank you so much once again. All of the guys who work there speak French and German, some of them speak English. I spent a lot of time talking to waiters, baristas and so on, they were very pleased to talk with people, who nkow foreign languages.
The hotel is right near the sea, so it was easy to get there at any time (but not at night - it is locked for our own safe). Swimming pools were clean the rooms too. The food, oh, the food!!! It was very tasty and so different! We ate around six times a day!!! And by the way we got the burgers at night because we made friends with some barmen) The weather in June was very good - hot, but we very comfortable! We flew with the parashute, tried Tunisian hookah and had a lot of other entertainment activities. The sea was wery warm and clean, the jellyfish were far away from the coast line - we saw them only flying on the parashute. I highly recommend this place!!!

Been here before, I expected improvements but left dissapointed!

I'm pretty sure that first time that I was here I wrote review but I can't find it, oh well I'm back at Djerba - Tunisia.

This was my second time here. First time was years ago with my family, this time with my girlfriend. So this is even better because I can compare it.

So since I was already here I kinda knew what to expect, but somehow I was expecting more because the things that I didn't like years ago they could fix during this period. But I was wrong, it was still the same, some things were even worse.

Hotel - So from the main building in this resort where we had our room to beach you need to walk about 900m. I compared pictures with ones that I took years ago, parks near pools and around hotel resort were so green and clean. Now in 2016 everything was so dirty with dried plants it just looked so abandoned.

Room - it was not bad at all, but I must agree with majority of reviews, it is outdated. They don't need to totally re-new it. Just do few little fixes and changes and it will be way better.

Food - It is pretty much still the same. I personally don't have any problem with food because I literally eat everything, but even I had troubles finding anything normal to eat, not to mention that it was more or less the same thing everyday and sometimes some food was not cooked properly.

Beach - It is not big enough for whole hotel, few times we arrived not that late (9am) and there were 0 sunbeds left so we had to put our towels on extremely hot sand, go swim in sea and then return to hotel resort to get some sunbeds next to pool. Beach was let's say acceptable, sand is always nice but the fact that it was sooo dirty is just a little bit too much. I don't mind few trashes here and there but it was more than that.

The thing that I don't remember from years ago when I was here for the first time is that you let random people who work for some random “agency“outside hotel resort, walk around hotel resort and promote their offers, not to mention how unsafe for your belongings this is. In all other hotels I've been to, there were hotel's staff promoting different trips, with official outfits, badges etc.. just a little tip so people will actually feel safe.

Okay so that is pretty much everything I wanted to say, I'm dissapointed but the reason for not giving it 1 star is because of TWO MAIN reasons:
1) PRICE. It was extremely cheap at least for that deal that we found it.
2) We are YOUNG and didn't look for luxury so it was somehow acceptable and we manage to get through this week of our stay here in Djerba Sun Club hotel.

Stayed here in the beginning of October. This hotel was a bit of a disappointment at first, but we ended up having a great holiday.

HOTEL: A bit outdated. Relatively good location, close to both Midoun (about 10-15min drive, 3DT/1.5EUR one way) and Houmt Souk (20min drive, 6DT/3eur with taxi). Free wifi at the reception area. Overall nice staff (including those who run social media), except some at the reception. Good security.

ROOM: The rooms are pretty poor/outdated. The ventilation (air conditioning?) is practically useless, it doesn't make any difference. Old TV (various channels, including French and Russian), no couch/stools, very awkward pillows (way too big/thick and hard - I started using the one from the extra/children bed instead mid-holiday or I wouldn't get any sleep). Two lights of in our room were without bulbs (but to be fair, we didn't go complain to the reception, so I don't know if they would have solved the problem or not). Bathroom is old. The curtain in the shower wasn't wide enough to keep the water in entirely. Towels are changed daily. No safe box in the room, there are in a special area near the reception (deposit + 3DT per day). No minibar, but it's not really needed as you can get drinks at the bars. Supposedly the rooms at the Karim residence are better, but they're extra charge.

BEACH: The beach is close, depending on the residence you stay at, only a street separates it from the hotel's grounds. Free sun loungers with parasols, but I imagine in high season it's hard to get a post. The beach is big and you can swim far. However, the problem in Djerba is the weather: there are at least slight waves everday and some days they're so big it's impossible to swim. There is seaweed in the water, although it's partially cleaned out (but not totally). You can get beach/pool towels at the reception if you pay deposit (it's 5eur per towel and you get it back when you return the towel), but if you want them washed you have to pay 3DT!

POOL: There are two pools and the main one gets very busy in the afternoon. There is music and entertainment by the main pool. The other one is by the Karim residence. There is one with waterslides, but I didn't go check it out.

BARS: There are about 2 AI bars inside the building, 2 pool bars and one on the beach. Waiters are nice but too busy, especially those in Ezzitouna bar. Many drinks are self-serving (water, soda, tea, juice). The biggest disappointment was the fact that NOT all bars were all-inclusive ... so all-inclusive is not really all-inclusive! For example, everything in El Mexicano is extra charge, so we couldn't enjoy it.

ENTERTAINMENT: This is the best thing about this hotel! The animation is huge and diverse. The team is about 10 people, both men and women, mostly Tunisians. They speak different languages, the shows are great and there is a lot going on during the day (sports etc.). Evening shows are done in 3 languages: French, Russian and English. Yes, Russians are favored a bit, as they make most of the guests. Followed by Germans and some French, Belgians, Czechs, Slovenians and a few Arabic people.

Overall, we enjoyed the holiday, mostly due to the animation. The staff make great atmosphere in the hotel. The facilities themselves could be improved a bit, especially the rooms.
We would probably not go back to Djerba, as once was enough (it's a small and peaceful island, we prefer continental Tunisia), but if we did we would definitely choose this hotel again.

P.S.: We put postcards in the box at the reception and they never got delivered ... not sure whose fault was that!

Two stars for the price and the Shisha bar.

Building is really outdated, rooms are very old and distanced from main building.
Staff are non profissional, some asking for cigarettes, some being very rude, and reception staff confusing reservation dates and number of days.

Pool is small and crowded with people.

Restaurant; food is less than average, serving stations are scattered all over the place, for instance, u need to walk a long way between salad bar and BBQ.

Compared to other Djerba resorts within the same price range, this is a bad choice.

I couldn't stay more, and changed to another resort.