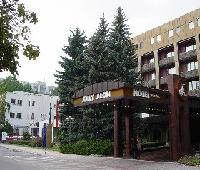 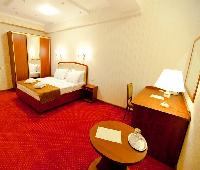 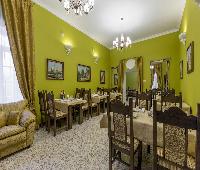 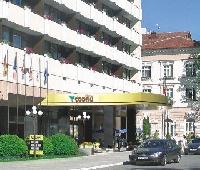 I had a superior double on the 4th Floor which was spacious and perfect for a business trip. We were on an ungodly flight to Moldova which arrived at 5am so I contacted the hotel on Facebook (email replies a bit sketchy). Everything was taken care of by a wonderful member of staff called Aliona who I think is marketing. Location wise the hotel was in an awesome spot just next to one of the central parks and close to all the amenities. We had an excursion to MIMI on our first day and fell in love with the wine, Mainly Fetasca and the rose. , so we were pleasantly surprised when we found the hotel stocks all Mimi wines.
The restaurant food was excellent although there was often no one in the restaurant. We had an issue at the end of our stay due to our travel company not having settled the bill - the front of house staff were excellent in communicating with our travel company who dropped the ball. I was disappointed with were the gym if you can call it that.
Hotel would do with a bit of modernization, my room was one of the modern ones but I understand not all rooms are done yet.
All in all a really really really good stay

I stayed at this hotel (called differently at the time) for the first time more than 20 years ago, when it was one of the first, if not the first private hotel in Chisinau. Since then the hotel had its ups and downs, but I was quite satisfied during my latest stay there. Clean, quiet, efficient, very good breakfast and reasonable wifi, though not perfect. And its location is nearly perfect - in the very center but no noise outside

good localization, friendly stuff and very clean, but... very expensive for this condition. Old furnuture in rooms, boring breakfast, swimmming pool open only for 2 hour and nobody knows what time, wifi? - they dont know it! Nightmare!

I was in Chisinau for the first time in June and my company had booked the hotel. Although the room was a bit outdated, it had its charm. It was spacious and had a lot of natural light from the big windows. However, the wall to wall carpet had a lot of stains from way back when and the bathroom was very retro and not in a good way. My biggest complaint is the poor service at the front desk though. I had lots of trouble with the ATM in the lobby and the front desk staff did nothing to help me. I have no trouble understanding the fact that the ATM is not owned by the hotel but it's still there and I was a paying guest. My card was lost in the ATM and I had to call the bank in Moldova. I didn't understand the sign because it was in Romanian, but the girl on duty didn't even get up to help me translate. I was really in quite a squeeze because I was flying out the next morning, but there was no help or service to get. Stay away from the place is my advice. I'm sure there are plenty of hotels in Chisinau where people make you feel welcomed!

May be hard to rate this hotel using Western standards

This hotel is located directly across a very nice park. It was likely a grand hotel in the 60's or 70's. The room decor seems stuck in that time period. The hotel is in need of a major renovation - but I also got the sense that needs for major renovations may be common in Chisinau. The breakfast was disappointing - with the many wait staff seemingly more interested in taking your room number than ensuring the hot entrees were stocked and the juice pitchers were full. I tried to order a late dinner in the bar (about an hour before the kitchen closed) and was told that most of the meals were not available (only the "meats"). I'd stay here again due to its proximity to where I needed to be. If I had a choice, I would try another hotel.