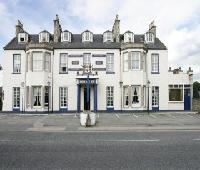 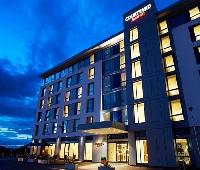 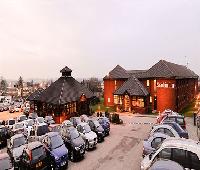 There is more life in a graveyard than this place.

Went in here for a drink with my partner one night there had been some sort of function on as there were dried old sandwiches sitting on the bar. Bar for the locals really if you dare to step into their realm you will stared at like you shouldn't belong. The barmaid had a face like a burst beach ball and also acted as bouncer. No music or atmosphere just the locals droning on about local events and people, reminded me of the local shop from the league of gentlemen. Dirty and dull won't be back.

Nice on the outside.

The room we had was tiny, the double bed took up almost all the space. Leave your suitcases in the car and just take a backpack in with only the stuff you need. Leave the cat at home there is not enough room to swing it in here! The shower stall was pretty bad with black mould/fungus growing around the bottom of the stall. It also smelled mouldy. Probably one of the worst rooms we had on our 13 days in Scotland. Although it has free wifi you can only get it in the bar area.

Okay, so whilst clean, the hotel could do with a little bit of modernisation but if you want somewhere to lay your head which provides a good meal and breakfast, then here you are.

Our room was fine, mostly clean although the duvet sheet looked like it could do with another boil wash and the laundry people should be checking how clean they are. Bathroom was fine with a decent shower but could do with some modernisation.

The food was great. We had a half-board meal and the Cullen Skink was huge and three meat roast far more than our large appetites could manage. Breakfast was what you would expect but with good ingredients.

Oh, I should mention that there is no Wifi in the rooms which is pretty unforgivable in this day and age.

All in all, it was okay. I've stayed in far, far worse but would advise them to check the cleanliness of some bedlinen - but don't let this put you off, the staff were so friendly I am sure they would sort it out any problem instantly.

Fantastic food the evening meal was lovely, breakfast is great and really sets you up for the day, super nice staff too and that really makes a difference. pity about the noisy fan that roared all night long, dont get me wrong i will stay again but i will avoid room 22.
No WiFi in the room either.

I would say if you need a clean bed with obliging staff and a good feed at breakfast then perfect. Not forgetting one very very relevant point and that is ; its not a kings ransom to stay here . In short I think it's a very good deal for the price paid.

The decor in my view is dated but I imagine a revamping would need prices charged to change .