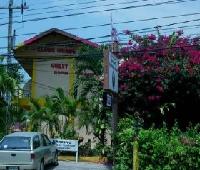 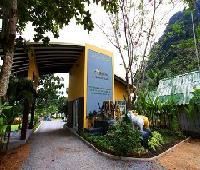 This has got to be the worst food I have ever been served - anywhere. Because of the heat I fancied something cold and not spicy for a change. I ordered the cold platter with German meat and bread. The servers don't hardly speak a word of English so they did not understand when I asked if the bread was homemade. So one ofthe owners came over and said "yes we bake our bread". I didn't wait long before I was served a plate with two slices of bread and different " german cold cuts". My husband had ordered chicken which was not served for another 25 mins. after my food arrived. We were the only guests there... The bread must have been well over one week old, it was so dry and absolutely tasteless. The meat (cut from a package) didn't even have the plastic wrapping removed and it looked just awfull. I tried a bit a left the rest. The chicken seemed to have been frozen and the deep fried to thaw.

Simply the most AWFUL food. A server asked if my food was ok, I said no. The owners were sat at a table and could see us, but they were too busy drinking wine to be bothered.

Do Not Eat Here!

I slid into this place without breaking step as I glimpsed their sign saying Fredy + Jurgens German Draft and NZ Steaks.

I imagine you have to go dig up the rear yard to find Fredy and Jurgen, if indeed they are there they would be rotating at a fair old rate in their graves if they saw what was being served in their names.

I was sat down and into my first Non-German Beer before my eyes got accustomed to the dark and I took in my surroundings.

Dirty and tired, unused catering equipment abandoned in a corner. The lovely smiley Thai faces were not going to make up for what they served up.

Everything on the table was truly terrible, the fillet steak inedible.

When I was a young kid at school we had weekly swimming lessons, well it was really more about how you had to teach yourself not to drown. The highlight of the lesson was when the teacher threw in a hard black rubber brick and you had to dive down and recover it. That black brick is alive and well and has a job as a fillet steak impersonator in Thailand.

I won’t go on, I guess these people were doing what they thought was right, but they did not seem at all surprised when I asked for and paid the bill without eating more than one mouthful.

We moved up the strip to The Elephants End and had our last and rather fine meal in Thailand there.

I really do not see this place doing any better. Avoid - unless you miss your school days and an old rubber brick.

Klong Muang is a really nice an quiet place. If you are looking for a place without tourists, this is the place to go! Klong Muang inn was nice, you get what you pay for, and a little more. Staff is very kind, funny and helpfull! A big thank you to Jürgen, who gave us excellent insider tips about Bangkok, that was very helpfull (we were going to Bangkok after out stay in Klong Muang) next to the hotel, there is a massage clinic called Yatavee - that place is highly recommented!! We would love to visit Klond Muang inn again!

This wouldn't be my first choice

The room itself is ok. I found it to be clean, average sized, nothing great but nothing bad and came with a small safe. Room comes with breakfast which is also good.

My only complaints with the room were you can hear everything that goes on in every other room, and there were kids screaming and playing the entire time we were there. It was very loud. They have free wifi, But they turn it off at 10 pm and don't turn it back on until 8 in the morning.

The worst part of it was the location. You are literally 2 minutes from the beach(provided you cut through a vacant lot off the street). But it is a beach no one goes too. You will find yourself alone mostly. The hotel is the only place that serves breakfast, I found one other place that serves lunch, Most other places(and there aren't that many) open at night. This place is so remote there are not even tuk tuk drivers or street vendors around. I found the location to be incredibly boring. Your can take a taxi to Ao Nang beach which is much more fun, But it cost 500baht each way( about 17 US dollars each way).

Considering Ao Nang beach has nicer hotels for the same price or cheaper and there is more to do in Ao Nang, and you won't have to spend 35 dollars round trip each time you go there, this hotel is hard to really recommend unless it is your last resort, as it was ours, or if you are just wanting total seclusion

The choice is your ultimately. This hotel didn't work for us at all, But if you want total isolation it would be great for that.

We have stayed in this Motel for 4 nights in November. The location is not particular great what concerns beach access and local amenities. The beach, which is nearby is not suitable for swimming as it is dirty, water is shallow and sand is not fine.
The room upstairs was decent size, is air-conditioned, clean and featured balcony with glimpse of sea. It had safe box and small fridge with two bottles of drinking water every day. Nothing special about the room but we had all we needed. On first two days we experienced water leaking in the bathroom that flooded the floor, it has been fixed within 48 hours.
The breakfast was as simple as it can be. Literally two fried eggs, two slices of bacon, two toasts, butter, jam and cup of coffee with the milk every morning with no option to chose.
The owners/management two German guys Freddi and Jurgen were polite enough to answer the questions we had as well as organize few local tours, but that is about all.
Overall feeling, the place is acceptable, bit not location. Will I come back, no.