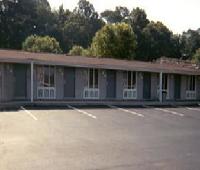 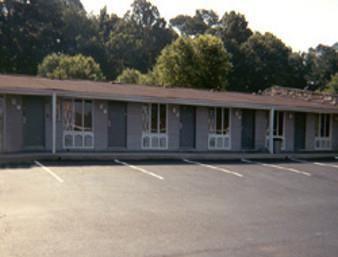 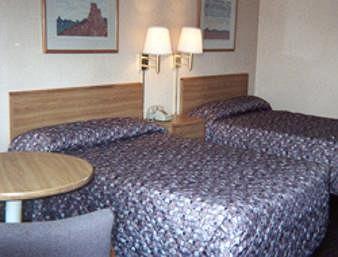 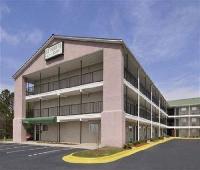 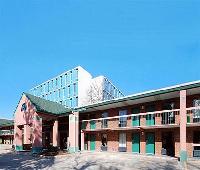 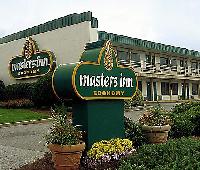 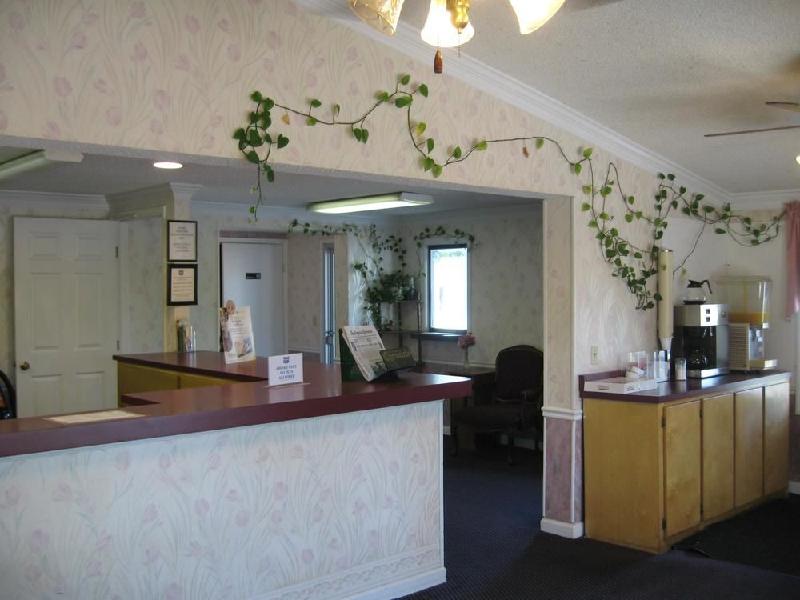 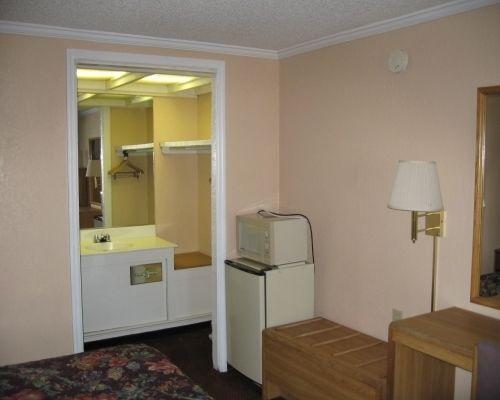 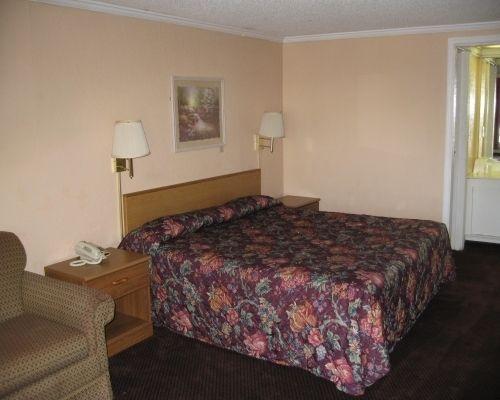 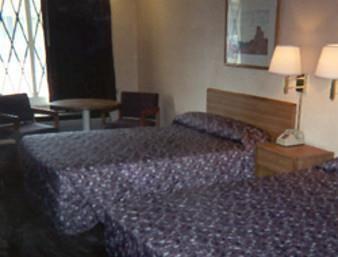 I wouldn't stay here again even if I was paid...

First of all, if I could give this a zero rating, this hotel would be the recipient! Having travelled all of Route 66 and staying in places where I have never even heard of before, I expected more of a Wyndham Branded Sister Property! Had there have been other hotels available in the area and it not been close to midnight when we checked in, I would have walked right back out! I should have known that it probably wouldn't be up to any good standards when I waited over 5 minutes at the front door, ringing the bell, knocking on the door and attempting to call the hotel on the phone. Finally, we walked around the side of the building to find the night attendant asleep at the desk and banged on the window to wake her up. Once inside, we were not greeted; the attendant tried to answer the phone that was ringing, which happened to me hanging up as we were buzzed in. I provided the normal credentials to check in, noting that I had made a reservation and was asked if I wanted a single or a double. I explained again that I'd made a reservation and offered to show the email or a confirmation number, but she said she only needed my ID and credit card which was already provided. She began writing my information and incorrectly copied that down; later I asked if I should correct it on the form prior to signing and was informed I could if I wanted, but it didn't matter. After she had written everything up, she went to check her system and noted that the system crashed; again, having made a reservation, I attempted once more to offer up my confirmation email. The amount I was being charged was not what I had originally reserved for and as they hand write the receipts anyways, I finally did show her my confirmation. I had to ask where our room was located from where the office was (as the rooms open to the outside and had multiple buildings) and had to ask about internet access; both items that are normally addressed at check-in. I was the only customer there and it took over 10 minutes to just check-in with a reservation as she took another phone call without prefacing she was doing so for 1 of those minutes while I stood there. I was rudely spoken to and being a Diamond Wyndham Rewards Account and Credit Card Holder I was nonplussed to say the least! This is not the level of service I would expect at any hotel brand, much less this one that I've been a member of for over 10 years now. This experience has turned me off from the Knights Inn sister chain for any future stays.

Now, on to the ROOM...the room we were assigned was located at the back of a lot by a tree full of noisy birds chirping away at midnight. This ridiculousness was lessened by blaring relaxing music while we attempted to sleep. It was stifling hot, as most hotels will turn their a/c off until the next guest checks in, so we crossed our fingers that we turned it in the proper direction as everything was scratched off of the plate and illegible. Luckily, it only took about 30 minutes to attempt to cool down, but never got quite comfortable enough (it was cooler outside than inside the room). The subflooring felt rotted and there was a sink-hole next to the bed. Additionally, the carpet felt grimy so I didn't remove my shoes in the room. One major thing (and actually a medical necessity in this case) was that we could not plug a sleep apnea machine into the sockets without having to find something to prop it on so that it didn't fall out of the wall.

The remainder of the Laundry List of Terrible things at this hotel (some of which I have pictures of and others I forced myself to not dwell on in order to have some semblance of sleep for the night*):
A Roach climbed out of the sink when we turned it on.
There were over a hundred Dead bugs (this is not an exaggeration) in the light fixtures over the sink.
We found Clumps of Hair in the tub & drain.
Several Dark Stains were on the covers forcing us to sleep on top of the coverlet with our own blankets.

All the above aside, we hoped for a little breakfast in the morning as advertised on the website, but never was actually mentioned by the staff who checked us in. When I went to drop the keys off to check out I saw that they had cereal & coffee. The coffee was decent, but cereal isn't car food. Needless to say, we were ready to get out of there as quickly as possible and were happy to wash our hands of the place! Camping might have been better because at least you'd know what you're getting into; it's fitting that this motel is located on Boy Scout Road as you'd have to be a boy scout to stay here!

*DISCLAIMER: I don't normally post grimey pictures like this, so I apologize in advance for the honest pictures of the lack of cleanliness seen.

This motel was a good last minute choice for the Masters Tournament. Less expensive than anything else, but for a reason. Think 1950 motel without renovation since then. But good bed/mattress. And very nice office staff. Not for everyone. But good for a guys trip when all you are interested in is being at the Masters all day and you just need a place to crash at night. Long walk to the course (1.5 miles), but doable if no other transportation available. Inn has access to shuttle service that accepts donations. Can leave your car parked at the inn.

My family stayed in this hotel because frankly I just needed something cheap as we got in late and was leaving early in the am. I needed a room big enough for 5. When I checked in I was told all the rooms have 1 sort of couch with 2 beds. We got in the room and it was a chair and 2 beds. the carpet was nasty and sticky. The floors felt like you could fall through at any point. The bathroom toilet kept gurgling all night, mattresses were like a rock. And the fridge I had to plug in when I got there so it took a while to get cold. Also every outlet that was in there was being taken over by either the tv or lights. Just one of the worst Knights Inn's I've stayed in! The girl at the counter was friendly at least that night but I can't say much for the one in the am. she was snippy.

We rented a room on August 9. We took our luggage in, then decided to grab a bite to eat. When we got back to the hotel we could not get into the room because apparently the key cards had reset and their key card machine was down. We waited for 2 hrs for the associate to try and get the key reprogrammed it never happened. So we made other arrangements since by then it was the middle of the night. We had to leave all of our things in the room also. The associate assured us we would be given a refund and we left with the assurance that we would be called once the room was opened up. We got the call about 45 mins later that we could.come get our things. We did and were once again reassured we would get a full refund. Here we are almost a week later, no refund. We were told that since we stayed in the room for an hour they are entitled to keep the.full charge. We have asked/called several times to talk to a manager, the manager will not talk with us and we are being refused a refund. Do not waste your time with this establishment. We have had to go through our bank to reverse charges, definitely a nightmare.

Absolutely love the motel very clean with the exception of a spider web or two but no big deal the front desk clerk was very very sweet very kind and I will be staying again. I took these pictures after I stay the night so excuse the messy bed and all.