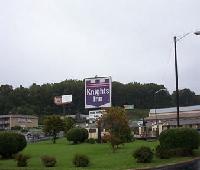 Property Location With a stay at Knights Inn Collinsville Va in Collinsville, you'll be close to Liberty Fair Mall and Memorial Hospital of Martinsville. Rooms Make yourself at home in one of the air-conditioned guestrooms. Cable television is provided for your entertainment. Business, Other Amenities Free parking is available onsite.

Property Location With a stay at Knights Inn Collinsville Va in Collinsville, you'll be close to Liberty Fair Mall and Memorial Hospital of Martinsville. Rooms Make yourself at home in one of the air-conditioned guestrooms. Cable television is provided for your entertainment. Business, Other Amenities Free parking is available onsite.

Bed bugs, room not clean when we arrived, smoke smell

My boyfriend and I were in town for a wedding and read a few good reviews about the Inn, and decided to try it as it was a great price. We have stayed in motels before and had average experiences, but this was the worst place we have ever stayed. First of all, we requested a non-smoking room. It was apparent that numerous people had smoked in this room - the smell was in the sheets, curtains, everything. Not to mention there were two cigarette burn holes in the sheets. To be fair, I understand management can't always control what people do behind a closed door.

Second, the bed was filthy. There were the burn holes I mentioned above, stains all over the sheets and comforter, and bed bugs (!!!!) crawling around every so often. I have a hard time believing that this bed was changed since the previous guest...and if it was, the sheets were certainly not cleaned.

Finally, the mattress was extremely uncomfortable and the entire bathroom looked like it had a thin film of mold over all the tiling in the shower and in the corners of the floor. We stayed for the duration of our planned trip as we had no other options, or time to make a change due to our schedule. I sincerely would never suggest this place to my worst enemy.

On a positive note - the wifi was free and it was close to our destination in martinsville. I would have gladly traveled 45 minutes vs. the 5 minutes for a better experience and to keep hygienic during my visit to martinsville, VA.

This place is a out dated however there is new owners that have a lot of great plans for the rooms and updates, it will of course like anything else take time, the rooms were clean, The Shower Pressure was awesome, didn't want to get out! We travel a lot, and I always check the rooms for bed bugs, I have been lucky so far I have never found any at any place we have stayed at! The New Owners are very helpful and are aware that there are many upgrades needed and they are working on them, they are Part of The Wyndham Group which has very good standards that the Hotel must abide by, They need some time to get these up grades done! when they bought the hotel it came with a Kitty, how sweet it was for the new owners to adopt this nice kitty. We were there for the Nascar Race Oct. 2016, we had ordered a shuttle to and from the track however it did not show as of about 1020 am, The Owner said he would take us if needed, how nice was that! As it turned out we rode with another guest. I would stay here again!

Staff was super nice, room was great and clean, and the shower had the best water pressure ever! This will be my go to hotel in this area from now on! I slept better here than I had in a very long time! I spend a lot of time in hotels spanning from Ohio, Kentucky, WV, and VA and this by far was one of my favorites! You're close to everything!

Much improved since new ownership!! Will be back in the spring

Last minute trip to the NASCAR race and took a chance as a walk-in. First hotel stop and got a reasonable rate. Learned new owners took over a month ago and from reading the previous reviews was very pleasantly surprised at the cleanliness. The shower water pressure has got to be the best I've ever had with plenty of hot water for a family. Great family owners with a great guest service and look forward to returning!

My friend & stayed here the other night. It was a little after midnight when we arrived & the woman who serviced us was not very friendly at all. The room given to us was outdated, had a horrible smell to the room. So we went back to request one of the rooms that had been recently updated some (we live here locally so was aware of this) she was again very rude and had an attitude about us asking to switch. We stayed in 157, the following morning when we woke up I noticed a bug crawling on my pillow only to realize it was an adult bed bug. We called the front desk and explained it and asked if they could come up to the room. They informed us they didn't have bed bugs and never came to our room.. We got our stuff together quickly to leave, went to return the key and to speak with the owner. The man & woman were both standing in the lobby area when we walked in and as we proceeded to tell them they did in fact have bed bugs the woman immediately went into defense stating they did not and that we must of brought them there.. We were simply wanting them to take notice of the situation and fix it so that the next person doesn't get bug bites all over them. We couldnt even finish what we were trying to say and she threatened to call the police. So I would advise anyone that is thinking about staying here to rethink it and consider the dutch inn across the street or the econolodge down the road. I have never in my life had such a bad experience with staying somewhere !