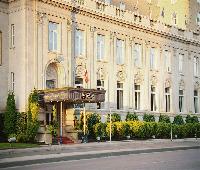 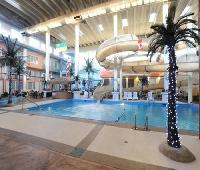 I stayed at this motel over the weekend. It was grimy, but I wasn't expecting much for the price that was paid. Check-out was at 11AM and at about 10AM I called the front desk to ask for a late check-out and was told no, even though I offered to pay extra. Before 11AM the front desk called my room over and over, I said I was just packing up my stuff and would be out the door. It was about 11:10AM when I was leaving and he was knocking on my door. I was so rushed to get my stuff together that I unknowingly threw my key in the bottom of my bag. I looked for the key but I couldn't find it right at that moment and I had to leave. I told him I had to go but I knew the key was on me because I had let myself into the room the night prior and I said I would return it as soon as I found it. He said they had to take $100 off of my deposit because they didn't have another key to the room. I thought, first of all, $100 for a key? And second of all, what kind of hotel doesn't have at least two copies of a key to their rooms? He eventually said he would hold $50 and as soon as I found the key, "even in a month from now," were his exact words, for me to return it and he would refund me the $50. Well of course I get home and find the key, and I called the hotel to let them know. The man on the phone was incredibly rude and condescending to me and let me know that I will NOT be getting my money back, even if I return the key. He said, "You would really come all the way back to Regina for $50?" First of all, this was none of his business, but I told him no, when I do return. He was so rude and snappy with me he said, "Come in right now and talk to only me about this, you will not be getting your money back". I told him what I was told by the employee there and that he should do a better job at training his staff. This was completely unacceptable, I ended up hanging-up the phone on him. I will never be staying here again.

Good Value for the money

Clean, quiet, big desk for working, plug ins for computer accessable. Flat screen and fridge in room. Not bad for the money paid. Staff friendly. Plenty of parking. Older motel but price is right if you are looking for value or are in town for work.

the old man was evil. never had experienced such rudeness in my life. pointing his fingers on my face and shouting like he owns me, and his saying that i'm the one who is rude. the place stinks. better find other place if you are thinking of staying here. will never come back to this place ever again.

It was a last minute check in because the hotel we had booked didn't actually book our room. Thank the gods though because that "hotel" was a lot worse than this was. For the most part the room was clean, but I did notice dirt here and there on the walls. The air conditioner worked but it had a terrible smell so we just had the door open to cool off haha. The employee was nice and helpful whenever we called and harassed him with simple things like extra towels and ice. We were only staying for the night and checked out first thing so it worked for what we needed.

I would not even check into the place the guy at the door was very rude wanted an extra $300 even after I paid for the room on expedia. Said that because I booked the room on a visa debit card that he couldn't charge the amount he wanted on it. I already paid for 2 nights but refused to give him extra money even the more expensive hotels do not ask for a $300 TO $500 deposit. that is insane. he wanted either a credit card that he could charge the amount to or cash.. ya right i'm going to go and get cash? in that location? no