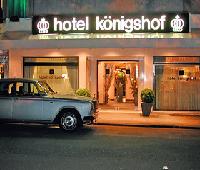 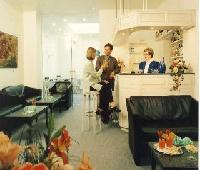 You get what you pay for

Two friends and I stayed here for one night whilst we visited Cologne. We got the triple room which had 3 beds (1 single and the other bed is made up of 2 single beds but this is very normal in Germany).

The beds were clean and the rooms were very basic. Not really adequate facilities to make a cup of coffee in the morning but because we were in the room only to sleep for a few hours this room was perfect for us.

We paid €100 for the room which when split by 3 makes this place one of be cheaper places to stay in Cologne which is why I would recommend it.

Staff at reception were friendly and let us leave our bags safely before we could check-in and after we checked-out without hassle.

The location of this place is incredible - so central and convenient to be at Hauptbahnhof/ Train Station and Cathedral in 3 minutes.

Disappointment right at the city center

Even for a 3 star hotel, the only thing that was good about this place was the location. Right in the city center, very close to the train station. Everything else was just not good. The bathroom was falling apart, there were holes everywhere from quick fixes and the room seemed like a very cheap place you pay by the hour. The pictures are very misleading and in the end it is very expensive even if you are only paying for the good location.

The staff was ok, not really friendly but nothing special. The WiFi was mostly working but the AC in the room needed its time and was barely able to cool down the room (it was very hot during our stay).

Overall, I would not recommend it unless the only thing you care about is being at the city center and barely staying in your room.

Nothing to do with Art

The name has nothing to do with the hotel itself...
Friendly staff...but the hotel itself is not clean, rooms strangely shaped... old bathroom, electric doses, and furniture in general...
Two tables in my room but no chairs (couldn't work properly on my laptop).
Price is too high for such a @&$*

First of all I'll start with the positives...
Sadly there is only one, it's central location.

& now onto the negatives... which there are plenty unfortunately.
The rooms are unbearably hot, even with the windows open the rooms are unbearable.
There is constant loud noise from the running water through the water system.
Dirty shabby rooms which look like something from the 70's.
& finally the reception staff which are quite frankly obnoxious!
Having returned after an evening out I requested an extra pillow & was given a towel, after explaining once more I was told that I could have an extra pillow the following day after 3pm!
The following day I once again asked for an extra pillow & was told rather rudely NO, there are no pillows available.
Thankfully I had to endure this terrible place for only one night, any longer & I would've found another establishment.
Trust me, the central location is just NOT worth staying here, either pay extra or stay somewhere less central.

Where to begin? As a very experienced traveller both for business and leisure, I have stayed in many hotels in various parts of the world over the past 40 years but this ranks as one of the worst I have ever encountered. We had chosen this hotel because of its proximity to the main rail station in Cologne. Our so-called "double room" would have been tiny even if it had been designated a single room. As it was, the two twin beds pushed together to create a double bed filled the entire bed space, leaving a gap of only two or three centimetres on either side of the bed and only a small space at the foot of the bed. The tiny wardrobe had no hanging rail. The bathroom was cramped and badly in need of modernisation. For example, an electric socket was positioned in the centre of the mirror over the sink! Surely this is dangerous and would certainly not be legal in the UK. The shower head was caked in green mould and the bathroom needed a thorough deep-clean. A hair dryer was wedged behind a towel rail. There was no hot water for a period of about 12 hours from 21.00 to 09.00. When we entered the bedroom, there was a musty smell as if it hadn't been properly cleaned for a very long time. There was dust on all surfaces and the carpet looked as if it hadn't been properly vacuumed for some time. There was no chain on the door to provide extra security and no information folder. So-called "tea-making facilities" were provided in the form of an electric kettle, two mugs (but no spoons) and a small bowl containing only sachets of sugar. But ... Catch 22! ... there were NO tea bags, sachets of instant coffee or pots of long-life milk! So we couldn't make a hot drink anyway, even if we'd been willing to risk boiling the kettle on the floor. The kettle's electrical lead was too short to reach any socket at a higher level. The TV was mal-positioned but it wasn't working anyway and the TV antenna socket was hanging out of the wall . The view from the room was onto a filthy internal yard. The lighting was inadequate throughout, not helped by the fact that two bulbs in the bathroom had failed. Having discovered all these shortcomings, we decided not to eat breakfast at this hotel but on our way out to find a nearby café (of which there are several) we peeped into the dining room, where only a meagre buffet was being served, which bore no resemblance to the excellent copious breakfasts provided in most German hotels and guest houses. Overall, this ghastly hotel falls well short of the standards usually to be found in hotels throughout Germany. Furthermore, it represented very poor value for money. The cost of our tiny "double room" was 200 euros per night, plus 5% city tax. For such appallingly low all-round standards and facilities, this was an absolute rip off.