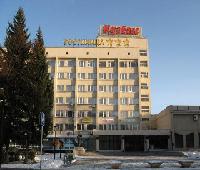 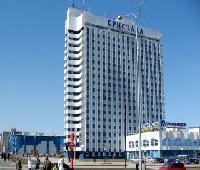 I guess it's a good hotel for Russian standards.
When I come in Kemerov, I thought I should have dropped my expectation a lot.
Indeed, the Russian standards for quality are much lower than western's standards, but I found very little to complain. The hotel is clean, though the structure is not recent. The rooms have enough space, and are well isolated from the sometime noisy street. They have Air Conditioning. The bath is ok.
Breakfast may be a weak point, there's no "international" breakfast and the choice is somehow limited.
We had an interpreter with us, so I can't say if personnel speaks english or other languages than Russian. But everywhere in Kemerov you'll face the same problem.
The other problem was with warm water, in the morning warm water can unexpectedly finish during a shower.
On the overall, this hotel is a good choice if you don't expect to much.

Check in took 45 minutes. There were 2 women there... one was checking in the person in front of me in the queue, and the other was trying her hardest to look busy so I wouldn't ask her to check me in. Well, I asked her and she did, but it took 45 minutes and I still finished faster than the guy who had been in front of me in line. By the time I was finished checking in, there was a queue of 30 people trying to check in or out.

Room was old, not very clean. Curtains didn't even cover the entire window. There was hot water and a couple bottles of water in the room, but otherwise the place was tragic - straight out of old soviet times with the same staff and same fixtures and furniture.

Probably better to sleep under a bridge.

This hotel has a very good location in the centre of Kemerovo.There is very beautiful surroundings and places near the hotel (Vesennyaa str., cafe, theatre, shops etc.). It's a nice old hotel with his own history. There are no all rooms with air condition. The furniture, as a hotel, little bit old. So, old, but nice hotel.

Nice stay. We had opted for a room with air conditioning as it was very hot during the week. We had a choice of east or west facing room. Located on a beautiful boulevard and walking distance to restaurants, small grocery store for bottled water and nice areas to walk or sit. Room had small fridge and fairly gpod storage. Tv had lots of stations but none on English. Hot water takes 5 minutes to get hot. No Internet a few days. Nice staff but almost no English. Room quite Skokie smelling but that holds true most everywhere here.

This hotel is a standard renovated soviet hotel, with a floor manager on each floor. Good location in the center of town, within walking distance to key transport links The junior suite I had was impeccably clean, reasonable bed, fridge, sofas and bathroom. Not very convenient for having a meeting, but doable. Only one restaurant working, but with good service and food. Most business services only available for a limited period each day, including the bar and cafe. Good Wifi connection in all rooms.