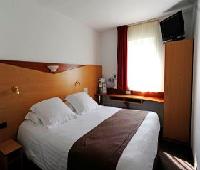 Front desk people were rude, they made it a point not to make eye contact so they could delay answering questions or being of service. The rooms were so small! Our camper has a bigger bedroom and I am not kidding. The shower...wow. Do not get too boisterous in there because the walls will fall in. By boisterous I mean, don't turn in any direction and do not drop your soap.
The location was in the middle of nowhere. The view was an empty dirt lot, the food was horrible. If you think you're going to get good food here because you're in France? Think again. Dinners were comprised of pig slop from the French Revolution.

EF Tours always puts us in budget motels, so this shouldn't have been a shock - but, this place was particularly nasty. Smelly rooms (old, cigarette smelling, carpeting), dingy walls, no air cond., so we had to leave the (screenless) window open - we were covered in mosquito bites each morning! Awful! Will say that the breakfast was decent.

Brilliant 2 star hotel which seemed like a 4 star as it was cleaned everyday. The staff were helpful, bed was mega comfy, shower was cleaned and had clean towels. Could not ask for more for the price we paid. Good value for money I would def go there again. 👌👍🏽

My friend and I just walked into the hotel room after a day on the train. I step into the shower to wash off and I see a USED BANDAID on the faucet. I was so disgusted and when I go to vomit in the trash can it was full of garbage. I do not recommend this hotel to anyone ever.

Everything needed from a Budget Hotel

This was exactly as expected from a budget hotel.

Beds and bedding were clean and comfortable. The room has a mini kettle, cups and selection of teas and coffees. It's a small room and with two large suitcases, we had trouble walking around the beds.

The shower and toilet were clean, however some of the fittings were worn and the toilet cistern constantly made the noise of filling up, without ever stopping. A large selection of clean towels was provided. The shower room is very cramped, but for a slim person it is manageable.

The TV was a good quality flat screen TV with loads of channels and I especially enjoyed watching CNBC, Bloomberg, BBC and CNN as those were in English. The TV is fixed into the ceiling corner, so you can watch it from bed, but it gave me a neckache after a while due to it being so high up.

The hotel provided a Wifi password and the Wifi signal was strong and efficient.

Management were very friendly and helpful. The first room we checked had a shower that wasn't so clean so they moved us immediately.

The location is right next to a Carrefour, so you can buy whatever you need, but it is a 20 minute bus journey from the centre of Cannes. However, the buses are very regular so you don't have to wait long.

It only cost me about £34 per night for a twin room and I even got £10 cashback by clicking through to eBookers from the Topcashback website.