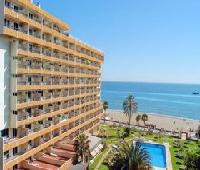 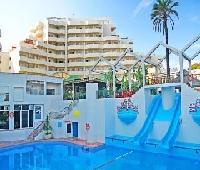 I have stayed at this hotel for an entire week and i couldn't have been happier.
The room is huge with all conforts. The pool garden is relaxing and amazing.
Just few steps away from the beach. Good location close to lots of good restaurants. I would be back

went to this disgrace of a hotel

Awful customer service when we had all of our money stolen from our suitcase while we were out, then when we were out the next day,my friends make up had been smashed around the room, and all of our liquids stolen. Hotel staff say that it is definitely not their cleaners but they are the only ones with access to the rooms and would know when we are out.

We booked as a family of four and the room we had was the size of a double with three beds in. When we informed reception there was actually four of us, a camp bed was added making the room very cramped.
four days into our trip access to the gardens was closed until 10am with all guests left to wait in reception or go elsewhere to seek the sun. This was to avoid people reserving sunbeds but I like sitting out in the early mornings. the pool is closed until 10am but this is a safety feature as the life guard is not on duty until 10
All equipment is to be hired, air con kettle and hair dryer and although you get the deposit back that's holiday money you can't spend.
The restaurant is very clean and breakfast offered a wide range of choice.
The hotel itself is very clean and well maintained and is located right on the beach in a busy part of the town. There is plenty of night life and good restaurants to eat at near by.

Never again , stayed here for three nights , as I had a late evening flight on check in I asked could I have a late check out ,they said I would have to check on the day , so next day I asked again just on the off chance but told I would have to ask on the morning of departure and there was a fee which Is no probs I can expect that.
so at approximately 01:30 hrs on the morning of departure I arrive back to hotel after my meal out and a few drinks and ask the guy in reception about late departure of which he says no problem writes my room number on his writing pad and I ask how much do I have to pay and he replys no charge ,so off to bed happy I go.
wow how things changed in the morning around 10am cleaning woman arrives I say late check out not sure does she understand due to language barrier but she closes door and off she goes , 15 mins later some sort of manager appears again I say late check out and off he goes then , all the power shuts down in the room !!!
I think to myself maybe power failure in hotel so wait about 20 mins power does nt come back so off I go to reception to see whats wrong.
I explain to guy in reception power is gone he shouts at me I must check out now I explain about late checkout and he is not having it , he starts shouting at me saying its impossible to have a late checkout, I explain to him that I had booked it and the guy in reception had taken it down in his notepad , while all the time this guy is shouting at me calling me a liar !!!!! and saying its not possible and I must vacate now, I think it about 11:30 at this stage, I ask him to contact his colleague he refuses as says his colleague is asleep which is a fair point , I ask him to check his colleagues notebook he refuses ,then he opens the door of a office behind him and there is a girl sitting there , she also refuses to listen to me and keep saying I must vacate , the guy is still shouting calling me a liar and tells me he is giving me 20mins to vacate I say I need a hour and he says he is calling police to take me away,
So I retreat to room shower pack up and arrive back at reception ,last thing I want is the police to come and a big show down, the guy has disappeared from reception but the girl is there , I speak to her and tell her they can t treat customers like this have they no respect ,she refuses to agree and keeps saying I must pay money to stay late , I say why not say first time , I offer money she refuses says too late now and shows me to room where I can leave my bag till the taxi arrives and have a shower where if I wish.
This room is all good and well but only one key to main door of room ,no key or lock on shower room , no towels , so if I want a shower I have to lock the main door of the room while I have shower which means that anyone else that has there bags in the room wont have access to the room to retrieve their bags while I am in the shower , so naturally that's not a option as not fair on other guests.
Apart from all that drama ,
The lifts are extremely old and shudder and shake as they move I was on the 9th floor so not much of a option but to use them. Rooms are extremely dated ,but I would have got over the rooms and the lift.
In all my travels all over the world I have never experienced anything like this ,it was a absolute downright disgrace the way I was treated and only for the threat of the police been called as I didn't know whom side they would take I would have stuck to my point.
I intend to raise this further with the local tourist board and the to the higher channels in the hotel chain