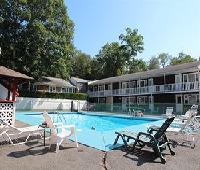 Rooms Make yourself at home in one of the air-conditioned rooms featuring refrigerators and microwaves. Complimentary wireless Internet access keeps you connected, and cable programming is available for your entertainment. Bathrooms with shower/tub combinations are provided. Conveniences include coffee/tea makers and irons/ironing boards, and housekeeping is provided daily. Rec, Spa, Premium Amenities Enjoy the recreation opportunities such as a seasonal outdoor pool or make use of other amenities including complimentary wireless Internet access. Business, Other Amenities Free parking is available onsite.

Rooms Make yourself at home in one of the air-conditioned rooms featuring refrigerators and microwaves. Complimentary wireless Internet access keeps you connected, and cable programming is available for your entertainment. Bathrooms with shower/tub combinations are provided. Conveniences include coffee/tea makers and irons/ironing boards, and housekeeping is provided daily. Rec, Spa, Premium Amenities Enjoy the recreation opportunities such as a seasonal outdoor pool or make use of other amenities including complimentary wireless Internet access. Business, Other Amenities Free parking is available onsite.

NO STARS if I could. No lights outside hotel room. Garbage dumpster feet away, smelly sewage drain 10 feet from room door, little black flies inside and outside room. Room was dark, dirty and smelled like bug spray (Staff admitted to bug spraying, gave no explanation). Black flies flew from under sheets when blanket was lifted. Nasty/ trashy surrounds with animal traps set outside in near by bush. No place for a business or family stay, dirty ash tray with filled with ash and cigarette but was on disgusting patio table in front room door. This place kept my deposit and charged me extra $25 when I run like a bat outta hell with the room key. I wouldn't let my family or my enemy stay there.

ONE star only because the pool had just been opened on the first day of my visit.

NO utensils, pots/pans or cutlery AT ALL in the apartment or kitchenettes.

Mirrors simply PROPPED UP on firniture--NOT hung on walls.

NO table or chairs in the kitchenette unit.

NO LAMP in the kitchenette. I have to use the stove shield to light up the room.

Other than a new toilet, the bathroom is dated from the 70's and the drain was clogged. Brush your teeth and get a pool of water left over in the sink.

Trash and scrap metal hiding under the vegetation--just waiting for you to come close-by.

POISON IVY ALL OVER the parking area.

Management was TOTALLY RUDE and entirely un-cooperative. They had double-booked our room. They called the police to report that WE were being unruly--yet they gave the room to the second party that showed up two hours AFTER we had arrived. When I entered the kitchenette at 11 PM in the dark, I awoke another guest that they had given our room out to--in spite of the fact that we had reserved three nights over a month in advance.

SERIOUSLY RE-CONSIDER booking this property. Read the other dozens of negative reviews.

I'm here as part of a film crew.
As I'm not the one paying, I can't comment on that part but mgmt double-booked the room we requested. They were not only unhelpful, they were SPITEFUL--giving the room away to the second party-- in spite of the fact that our room was booked over a month ago and we arrived 2+ hours before the other party.

After nearly two hours of back and forth, we were given a 2-bed kitchenette. There are FIVE of us, so this was not very helpful.

There is NO table nor ANY kitchenware at all. Not one piece--pot, pan or utensil.

In both rooms I saw, the mirrors are just propped up on other furniture. Shouldn't you put them on the wall for safety?

I'm writing this review by stove light. There are no lamps in this room.

Outside there are hulk washing machines and A/C units abandoned under the stairs.
I will say that the pool was clean because July 1st--the board of health just was here to inspect it.

No matter what your budget or situation, RE-CONSIDER your stay here.

I gave a deposit for a booking I made this upcoming August. When I called to cancel my reservation they were COMPLETELY useless. I have called 6 times now to get my $100 deposit back and every time I call they have a new excuse. DO NOT give these people your money. They are completely unprofessional and have no idea what they are doing. Now I have to open an investigation with my bank in order to get my money back.

Nice owner, the room,not so much

Stayed here over Christmas to visit with family nearby. It was only to sleep and shower, but the room , which was supposed to be non smoking reeked of cigarette smoke. Still washing all the clothes... Also, the neighbors, who I think live there year round (in an apartment attaced to the hotel building) were noisy and my kids could not get to sleep. We should have said something right away, but just thought we would deal with it. The owner asked how it was as we checked out and we told him. It needs updating badly, broken tiles in bathroom and cigarette burn on one of the sheets. But I would not have cared if my room did not stink. I know you get what you pay for, but some things should just be universal.. like a clean room or no noise late at night.