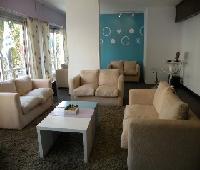 Okay, for the location and city

This hotel is in a great location -- not far from the port, close to the Rambla, and easy to grab a taxi from the square it faces. The staff were friendly and helpful, but I think it's a 1-2 star hotel overall. The breakfast was a bit sketchy, and often had flies which made it very unappealing. The room I had was mostly clean, but the floor clearly had some permanent dirt on the wood, and a few of the parquet pieces were quite loose. The bathroom was clean, except for the shower which had long hair and some mold. Overall, if you're a backpacker, this place will do. But if I had a more mid-range or baller budget, I'd stay in Pocitos or another part of town.

I stayed at the Lancaster Hotel for one month in February with a large group. While our rooms varied in size, decor and cleanliness, overall they were consistently dirty (mold in the showers, dirty shower curtain liners, shabby carpets, etc.) and outdated. It reached up to 90 degrees Fahrenheit during parts of the month I was there and my air conditioning was broken for a week before the hotel was able to fix it -- I ultimately had to be moved to another room. The breakfast is basic (instant coffee, watermelon/bananas, bread, cheese and meat) and often covered with flies. The WiFi is also very poor and does not reach all the rooms equally. I would not stay here again!

Friendly Staff, not a great place to stay

The rooms were in very rough shape, the first room I had was very old and dirty with really filthy carpet so I requested a change. The next room had hardwood floors but that was about the only upgrade. The double bed was two twin beds pushed together that split apart every night. The bathroom wasn't very clean, the back of the shower had grime in it. Some nights I'd come home and have no towels from housekeeping. The only reason this gets 2 stars is because the staff is very friendly and helpful at the front desk and the location is nice.

The staff was very friendly and helpful. The only thing that bothered me, the shower/tub was small and it was tough to turn around in it. Also the bus stop was outside the hotel so it was easy getting a bus and returning.

The location is really good and the staff (at the reception) very nice and helpful. We read a lot of not very good reviews of the place but we decided to book it anyway because of the low price & location, but our experience was really good, it was nice and comfortable.
The interior would definitely need some renovation, everything is rather old.