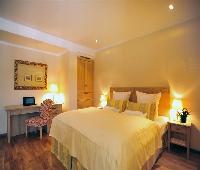 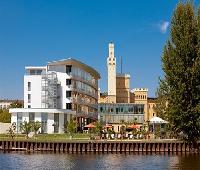 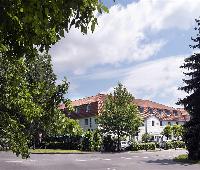 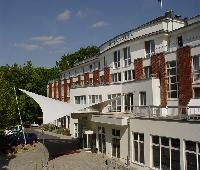 We have found this hotel randomly, because we didn't arrive before 18:00 to another hotel and they canceled our booking. Fortunately, Landhotel Potsdam had free room for this one night. We had no other choice, but we have no regrets about it, because Landhotel is very nice and cozy. At 23:00 we occupied the last parking place near the hotel. We were angry and hungry. Hotel staff behaved very friendly and professional. It helped us to settle down. Unfortunately, restaurant was closing, because of too late, but they presented us large bottle of water. Receptionist explain us how to use wifi and I have to spend the next few hours to find and book the hotel for the next few days. As I have recognized in the morning this hotel is a little bit far away from park and city center, but I believe it is only one minor flaw.

A country inn on the outskirts of Potsdam!

This hotel was booked for us by my host at the Max Planck Institute in Old Golm (now incorporated into Potsdam) and is essentially a country inn. Many of those we saw at breakfast were group bicyclers touring the area, and there are numerous scenic sights to see if one has a bicycle or car in this western suburb of Potsdam. Of course, Potsdam is also famous for Sansouci, inclusive of palace and extensive gardens.

While internet was not free, it was not expensive. The service was exemplified by a knock on our door at 8pm our first night, when the desk attendant presented us with our missing roll-a-boards, that at last were delivered by Air France after failing to put them on our flight to Berlin.

The room was above average in area, very clean and comfortable, and the hotel also provided an adequate breakfast. The bar and restaurant also were nice, and we found both lunch and dinner there to be pleasant and enjoyable.

The hotel is close to bus stops that make accessing the main railway/bus station in Potsdam easy, and the Golm train station is almost as close by foot, and goes directly to the newer Berlin airport (Schoenefeld, SXF) in 28 minutes.

A good option in Potsdam

The location of this hotel is outside of the city center (as the name says), if you have a car, it is just 5 minutes of driving to the main attractions and shopping street or even less to the park. The rooms we got were kind of small and on my opinion some renovation was needed. The breakfast was OK. Generally, you get what you pay for.

The hotel is quite nicely situated, only a five minute drive away from the lovely castle of Sans Souci.

The standard of the hotel was nice, and also the room we lived in (314). We're a big family, 2 adults and 4 children, and there was plenty of space in the room. One doublebed for us grown ups, 1 babybed, 2 small extrabeds plus 1 bedsofa. The hotel charged us extra for all the beds for the kids, wich offcourse is ok, but they also charged extra for the kid (10euro/night) sleeping in the existing bedsofa, wich I find a bit strange. If the breakfast was included, I might by it - but not now.