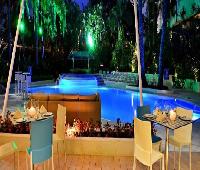 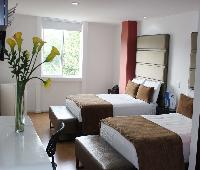 Location is convenient. However, the room was very dark and small, the furniture was broken and there was a lot of noise from a conference room next to us. We asked for a change and they assigned us to a new room. The new room was better (it had more light and it was more spacious) but the towels and sheets were still old and age-worn. Very poor breakfast. Friendly staff.

So wanted to give this a good review, but can't recommend it.

We arrived at this hotel because the one we wanted to stay in was closed, and this was close. It was already too expensive, but it looked really nice and they said they had wifi which was important to us.

We had a small room with a window to the stairs so we had not natural light. This did mean we didn't have the din of the traffic outside. But it did mean we could hear the breakfast staff from 5.30am and their telephone ringing all night for some reason?

Bad points:
We had trouble all the time connecting to the wifi in the room even though there was a router for each floor. When we did connect, it was very slow.
We had no TV for one day. There was just snow.
We had no hot water for one night. The night before we had the same problem, but they manage to get it hot somehow.
The hotel is only 2-3 years old and the fixtures and fittings were falling apart.

When we asked for a discount because we had no hot water, no tv and no internet as they said we would have, they refused saying that we already had a discount and the price should have $180,000COP. When we checked-in they said they would discount it from $125,000 to $120,000COP. They never mentioned the price was $180,000 which is definitely way too much for this lack of facilites.

Plus points:
- The staff are really friendly as we've found all over Columbia.
- The location is great with lots of restaurants and bars around. It's also very safe.
- The breakfast is good with fresh fruit, cereal, bread, jam and eggs how you like them. (Although there was no fruit on the Saturday we stayed). And the view from the roof top restaurant is great although very noisy.

We notice a lot of people complain when it came to paying their bills, but as we didn't speak Spanish very well, we didn't know why. By the end of our 3 night stay, we had a good idea of what it might have been.

We were just really disappointed as we paid a lot for the room and it's services, but we didn't get them. Had they been apologetic about the problems and offered even a small discount we might have been able to overlook some of the issues, but there was nothing. Cast a shadow over our time in Cali unfortunately.

PS: the staff speak no English, so in case, like us, your Spanish is very bad this may cause you issues when you need to try and get hot water, internet or the TV working.

Oh and they have a hot tub, sauna and gym by the looks, but there was no water and no heat in the sauna.

This hotel is 1 month old and is located in the Granada area of Cali. The rooms are very nice and contemporary but at the time of my stay..the phones were not working. The rooms are on the small side (but I am 6'5) and the TV's are oddly..about 20" flat screens??? But the hotel has a very nice roof top breakfast/restaurant area with nice views of Granada and south Cali. The staff was pleasant and one girl speaks english. You are one block from the shops and restaurants of Granada and also 1 block from the famous Avenue Sexta where many discos line the avenue. Overall the stay was good...I checked out of the Hotel Granada Real (3 blocks down the street) because it was out dated. It is good to see Cali getting new contemporary hotels popping up...such as; Hotel MS Chipichape & Hotel Cuarta Avenida. If you plan on staying in the Granada area and 120,000 pesos is your buget...I highly reccomend The Las Vegas Granada. They also have 2 other locations in Cali.