Comfortable apartment (for 1 to 4 persons); kitchen separate; located on the 2nd floor with elevator. You will have a terrace overlooking the living room and the bedroom. Ideally located to visit Paris; Montmartre and its surroundings. 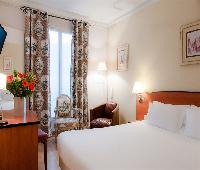 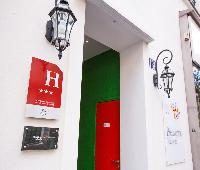 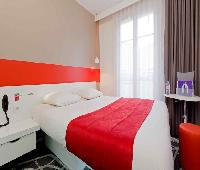 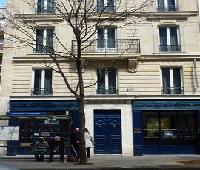 Comfortable apartment (for 1 to 4 persons); kitchen separate; located on the 2nd floor with elevator. You will have a terrace overlooking the living room and the bedroom. Ideally located to visit Paris; Montmartre and its surroundings.

Good enough but nothing special

The studio flats are tiny - smaller than a mid-range hotel room, and are missing so many basics - no dishwasher, bread plates, soup/past bowls, teaspoons, draining board, only one mug, one knife, one dessert spoon, no loo roll holder in bathroom, very very noisy boiler, v poor quality tv reception
But at £50/night you'd be hard pressed to find anything comparable for the price

The location of the apartments is really fantastic and a view over the canal was really nice. Everything else was poor. Dirty flat, TV didn't work, bed awful, dubious electrics and cheap tired furniture. I wouldn't stay again. I didn't complain until after checkout which the manager used as grounds to reject my complaint.

Really good value room found on late rooms. Checked out the website before booking and it looked amazing. Obviously they show only the best rooms in their photo gallery so when we arrived it was not nearly as cool as we were expecting - studio apartment was effectively a Travelodge room with a fridge and cooker. However, it was clean, centrally located by great bars and town and the reception staff were really helpful.

I wrote an email of complaint after our stay in August 2012 because certain fairly small things were not dealt with when we mentioned them at the time. I received a very swift reply;apologising and assuring me that the issues would be dealt with. The manager also said he would refund part of the let fee; which he did.
I was impressed that the management clearly were concerned about guest satisfaction; and in light of this I would stay there again.
The apartments are secure, and in a good central location; well set out and equipped. There is a secure underground carpark at a moderate fee.

This is an anonymous block with anonymous decor in the public circulation areas and the studio apartment room. Just about big enough for a double bed, small dining table and kitchen area, there was nowhere to sit down other than on the bed. Decor was mostly black and white and unwelcoming.

Location just off the city centre and shops was good, and there is a nice riverside park just across the dual carriageway.

The basement garage seems to flood whenever it rains heavily, the walls show water damage, and the access areas smell damp.

Contact with staff is deliberately kept to a minimum. Instruction was to put my keys through the room letterbox when I departed at the end of my stay.

The kitchen hob was dangerous with a missing knob to a radiant ring which was always in the heating position. The 'recessed' light fitting above the bath was hanging down by its flex out of its housing and looked equally dangerous.

One would have to be in want of a soul to like living here.