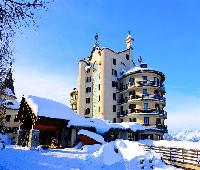 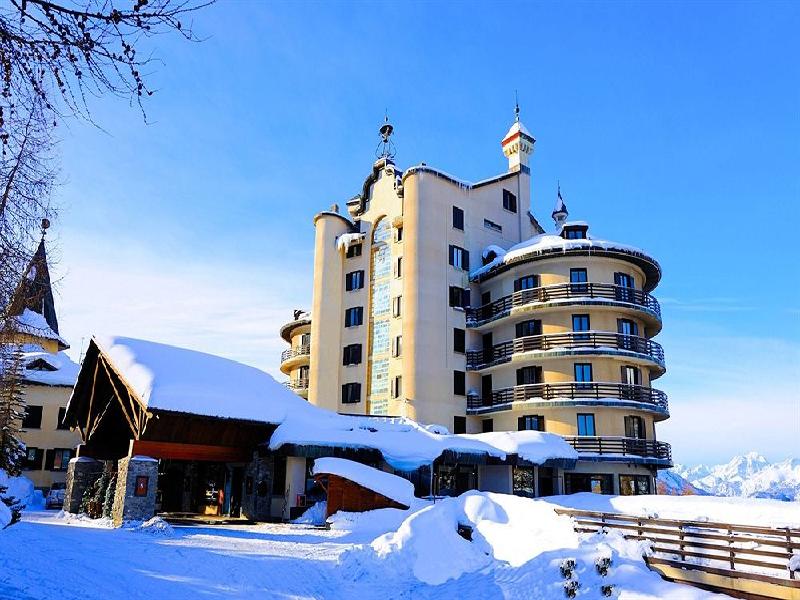 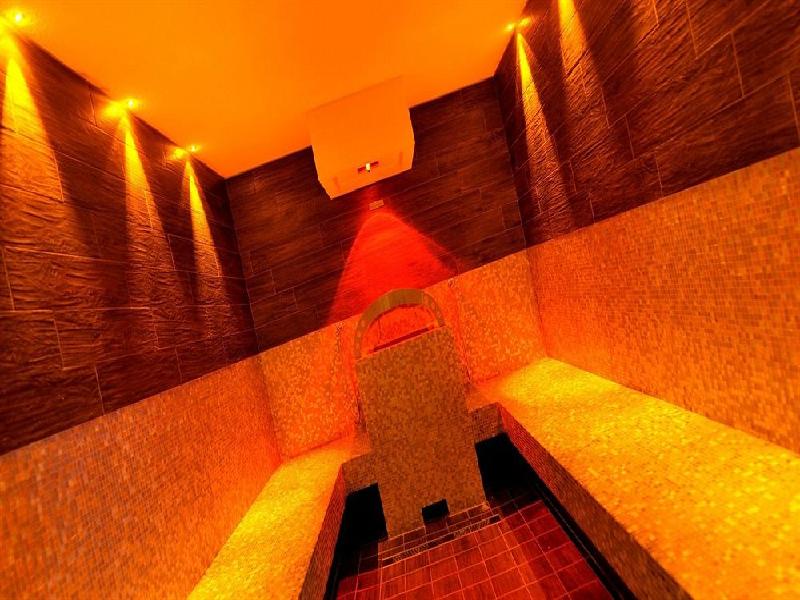 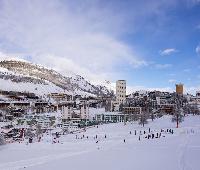 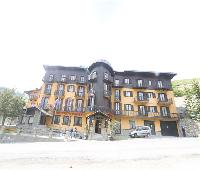 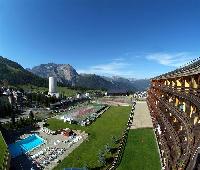 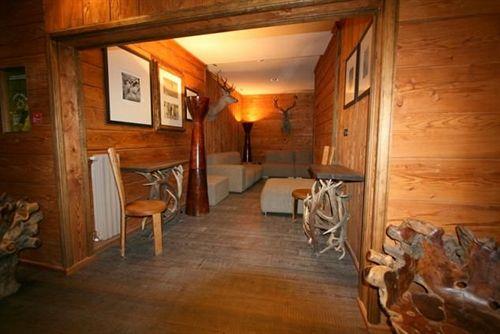 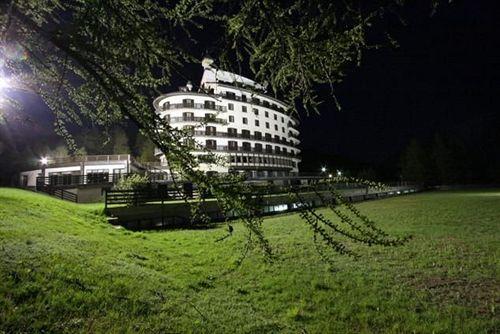 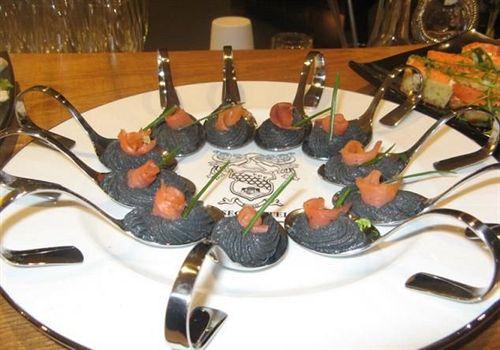 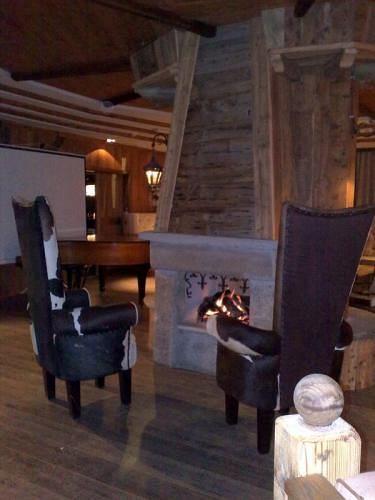 Great location, very good hotel which could be great...

We had a wonderful time at the hotel and were overall very satisfied. I think it is a great place for skiers as it's (almost) ski-in ski-out -except for a 20 meters walk to get to the start of the nursery slope that takes you down to the resort and back from one of the chairlifts' middle station. Rooms are also nice and well appointed and the breakfast was also very good. We would return there in a heart beat as this hotel really stands out from the rest of the resort. However, I cannot refrain from commenting on a couple of points that make this hotel less than excellent: (i) transport: the hotel is quite a walk from downtown so I would have expected longer functioning times for the hotel shuttle (last shuttle at 7:30 is way too early for the eating habits in Italy) so one is left at the mercy of taxi drivers (not that expensive, but still) or of its own feet on quite a steep walk-up back to the hotel; (ii) the pool: well, it's a good spa, actually, but you have to pay for it separately. I have never experienced that ever in any hotel I have stayed in. They will tell you it is run by a different company... So what, can't they enter into agreement with them, do the math of how many people actually go to the spa and increase the room price by an average figure (I am sure 5-10 euro per night per room would do the trick)? Anyway, food for thought... But this are only improvement suggestions mentioned in good faith... The overall feeling was still very positive and I would warmly recommend this hotel to any of my friend no matter how picky they are!

Great place to stay during your Ski-Holiday! Directly at the piste, close to La Gargotte (après-ski bar) and lockers with heating for your shoes. The rooms where clean with a nice view on the mountains and they had a good shower & bath. (I didn't try the pool and spa, but I heard it was very nice too.)

The lounge, bar and restaurant are nicely decorated. The kitchen prepares delicious Italian food; for the broad breakfast buffet, 'aperativo' and diner!

Definitely a recommendation to stay here during you holidays to Sestriere, I will come back someday!

Nice hotel but out of town

The hotel was well located for skiing; you could ski back to within 30 metres and it's a short walk across the road and up a little hill in the morning to ski down to the Garnel lift. At the end if the day, you take Garnel and get off at the mid way station to ski a track back home. The boot room is lovely and warm but it is not accessible from within the hotel and you have to go out of the door and then down about 20 stone steps which I didn't think was a great idea once everyone is wearing ski boots and carrying skis!
Our room was nice and we had a balcony and a piste view. There is a great jacuzzi bath and we used this a lot. We paid the extra for the spa facilities upfront (€128 for 2 for 6 days), and we also had a couples massage one day that cost €90 for 25 mins for two of us. The spa was nice but there were a lot of children in the pool most nights. The outside jacuzzi was nice but not that hot unfortunately.
The food in the hotel was a disappointment for us. Breakfast was very nice and there was loads to choose from but we couldn't get a decent capuccino - they were always cold and very weak. We finally cottoned on to ordering a black Americano with hot milk. In the evening, the menu was very varied but not really designed for English tastes...there was a lot of seafood including razor clams, octopus, scallops, all served cold and the meat was generally veal, or very rare beef or lamb. The pasta courses were delicious though and there were very varied buffet starter and pudding courses.
The staff were all very friendly, including the man who drive the shuttle bus to and from town on an endless loop. We enjoyed our stay and enjoyed Sestriere but it's not a hotel we would rush back to as it is out on a bit of a limb and we felt a bit isolated here.

Overall this was a good stay, as part of a Crystal Ski package. We were on a half-board basis, and the food was good, especially the restaurant buffets for both breakfast and the anti-pasti at dinner. The restaurant staff were friendly and service was good. choice of 3 starters and mains for dinner varied each day and were mainly good, with one or two exceptions. Nice desserts from the buffet. Huge wine list, but a limited selection at the lower end of the price scale. We found two nice ones at €35, but they then ran out of both. The hotel also has a separate gourmet restaurant but it was closed for the week we stayed, with no explanation offered.

In terms of location, the hotel is isolated from the main town, but for skiing this doesn't matter at all, as you only have to walk 30 metres with your gear before you can ski to the bottom of the Garnel chairlift or the cable car to Sauze. Even though the hotel operates a free shuttle to and from town for a few hours in the morning and late afternoon, if you want some night-life, the location probably isn't for you. We chose to 'stay put' most evenings because it's a nice hotel, but then fell foul of the inflated drinks prices between 6 and 8 pm. To be clear, they charge more then because they provide a nice buffet in the bar, but if you have already paid for dinner (as we had), then this is annoying (to say the least). The hotel don't explain this at check-in and neither did the Crystal Rep, so don't find out the hard way at check-out as we did.
The rooms were nice and well equipped even if the walls are a bit thin, but the doors slam if people let them, and many did! Great views from many rooms and from the restaurant. Swimming pool looks nice but at €12.50 per visit (as a hotel guest) we didn't bother. Good locker room for ski gear, free on request.
Overall a nice stay but tainted but the high drinks prices, which is a pity.

Don't get me wrong this is a nice hotel - but for grown ups only. From a family point of view we booked as a family of 4 with two well behaved children aged 8 & 10 yrs old and the hotel is definitely geared to grown ups. The main issue being the swimming pool facilities (which have you have to pay extra for) only allows children until 5pm and they are only allowed in the swimming pool - not the bubbles spa or outside hot tub (I totally understand the saunas being out of bounds though). And they are very strict on policing this! So you feel a bit naughty being in the pool area even having paid extra for the privilege - and even though there were lots of us there with kids as it was English half term break. Also the buffet for breakfast and dinner were lovely and the staff really lovely, however again they don't even notice all the kids trying to use it can't reach half the food that is displayed high up on built up displays (and our kids aren't tiny tots and couldn't reach half the food). Then as for the location the hotel is great being on piste and you ski to the lifts. However with kids, when you're done you need to rely on one very busy poor man driving a mini bus to and from the town centre to get home. Given your kids are tired it's a lottery as to whether you see the bus, or if you can squeeze in as it is always packed - and again no adult guest (in our experience) in this "adult" hotel will get out to let your knackered teary children in. Fair enough I suppose as they have every right as a guest but not ideal when your needing back to your hotel before meltdown. Also the bar is ridiculously expensive - not many folk using the bar!!! Oh and one last pretty major issue is our bed was like sleeping on concrete - wow I think it's the worst hotel bed I've ever slept in even after a solid day skiing!! Anyway, it is a lovely hotel (apart from the bed & bat prices) and the rooms lovely - but not for us as we want a hotel geared to being family friendly. We love Sestrierre and are definitely returning next year but are already loooking for a more family friendly hotel. Any suggestions??