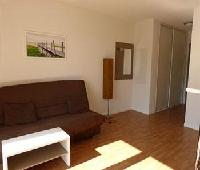 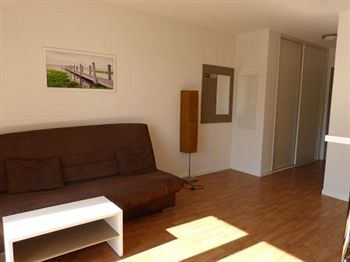 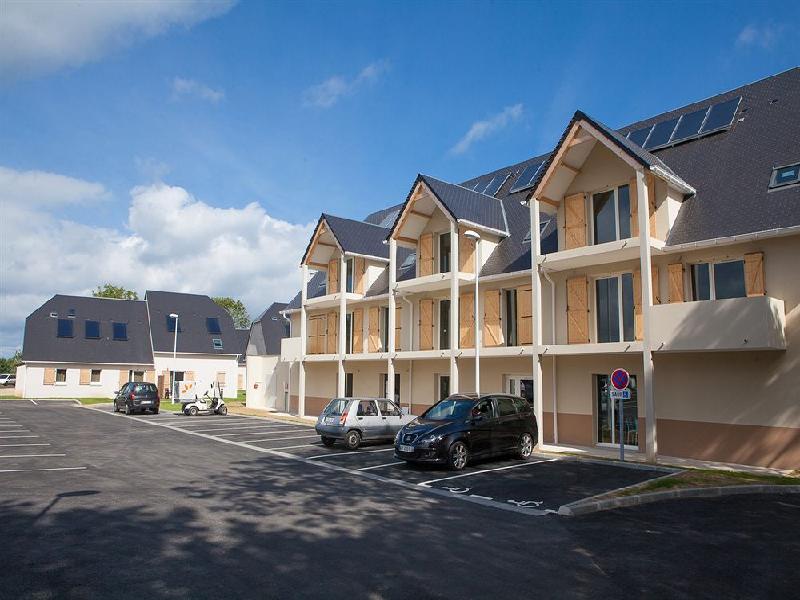 Property Location Located in Auberville (Seine Bay), Rsidence Club mmv Le Domaine de la Corniche is convenient to Houlgate Golf Course and Villers-sur-Mer Beach. This residence is within the vicinity of Cabourg Beach and Cabourg Public Golf. Rooms Make yourself at home in one of the 101 guestrooms, featuring kitchenettes with refrigerators and microwaves. Rooms have private balconies or patios. Wireless Internet access (surcharge) keeps you connected, and digital programming is available for your entertainment. Rec, Spa, Premium Amenities Dip into one of the 2 spa tubs or enjoy other recreational amenities including a health club and a sauna. Dining Continental breakfasts are served daily in the breakfast room for a fee. Business, Other Amenities Featured amenities include a business center and laundry facilities.

Property Location Located in Auberville (Seine Bay), Rsidence Club mmv Le Domaine de la Corniche is convenient to Houlgate Golf Course and Villers-sur-Mer Beach. This residence is within the vicinity of Cabourg Beach and Cabourg Public Golf. Rooms Make yourself at home in one of the 101 guestrooms, featuring kitchenettes with refrigerators and microwaves. Rooms have private balconies or patios. Wireless Internet access (surcharge) keeps you connected, and digital programming is available for your entertainment. Rec, Spa, Premium Amenities Dip into one of the 2 spa tubs or enjoy other recreational amenities including a health club and a sauna. Dining Continental breakfasts are served daily in the breakfast room for a fee. Business, Other Amenities Featured amenities include a business center and laundry facilities. 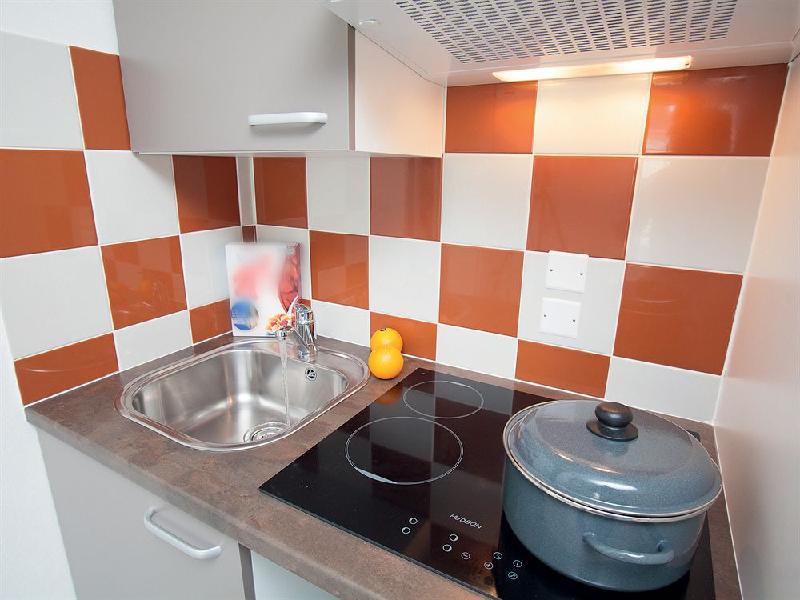 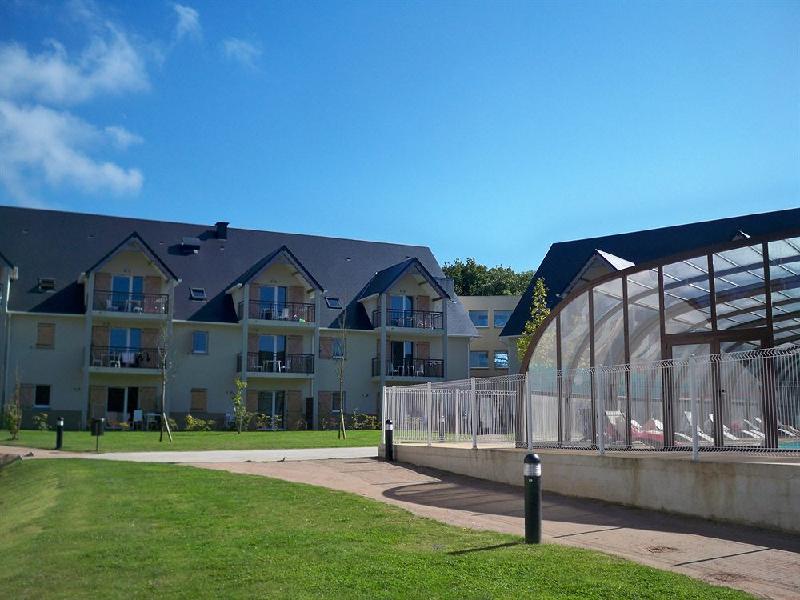 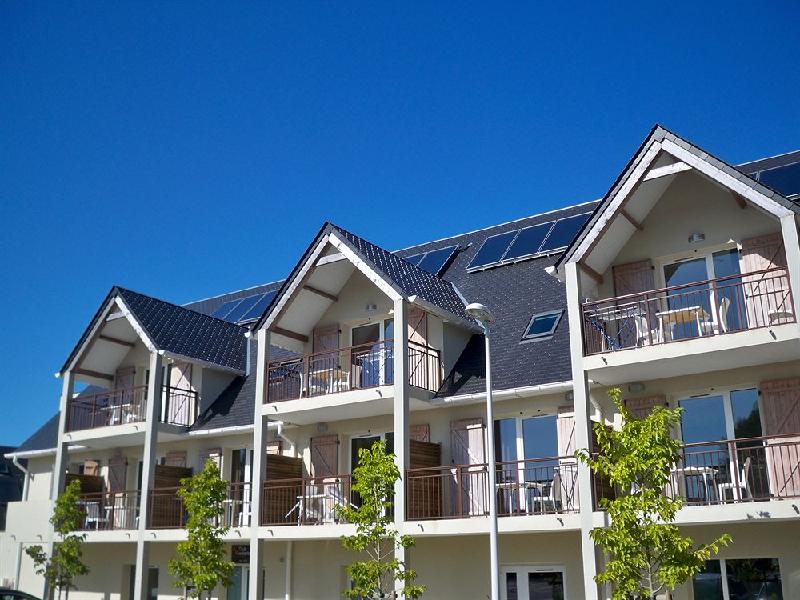 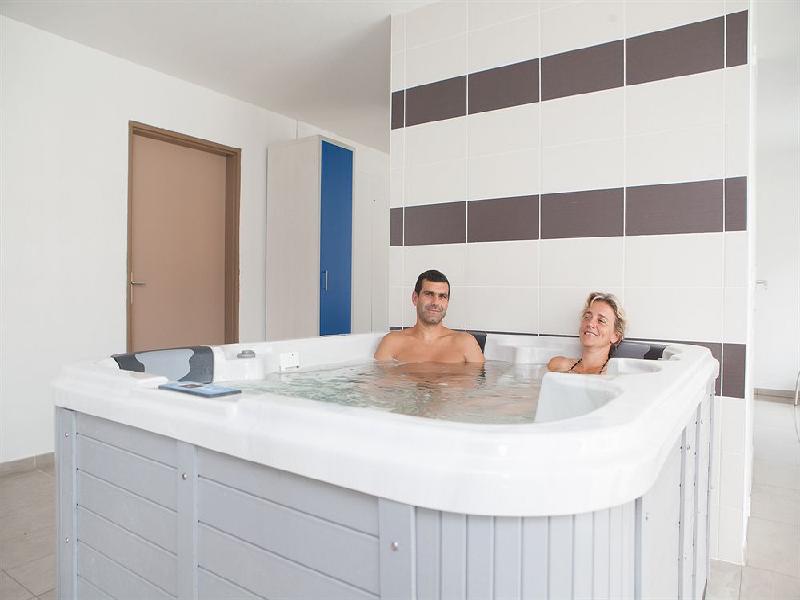 Came for an event, family ‘list of places to stay’ had this shown as a 4 Star ⭐️

We arrived and the initial impression of old building refurbished on a bluff, picturesque outdoor courtyard was pleasant. The “spa” boasted about and ‘offered’ to us free isn’t in the building but across a gravely parking lot that would require full dress to reach and redress to get back to room to relax! The restaurant is also NOT in Hotel.
Then after Parking and dragging bags over gravel into reception hall to register, our check-in clerk tells us we are over in the ANNEX Manor house!?!? So now bags go back into car, over gravel again! Into car to move 300 meters to another gravel parking! This time up 3 old stone steps and into a chilly foyer and a now DEAD former reception counter! No flowers or warmth to greet those exiled here!
We get the first room in entry hall. Smack next to front door with it opening and closing as folks come and go; crunching through the gravel parking lot. Very thin walls! We hear every sound, little heat, and room for just one suitcase. No plugs for charging devices, which has become standard in even 2 star hotels!
The door frame has chipped paint.
They did offer a robe and sandal slippers, but not enough to merit a 4 star classing!
They need to be honest and tell folks when they book, WHICH building they will get! The pictures of stylish modern converted old Domaine are deceiving when one gets put outfield in the Annexe! Had we not been tired, and unwilling to loose 2 nights room fee charged on card, before we were told we were in Annexe, we would have left! Just To prove how dissatisfied we were! But they don’t care once they swipe that card, they have you! Go ahead and leave, we still get your money! $$$
Be Warned!! Say NO to the Annexe. Also no elevator just stone bare steps to upper floors!

Great location, but we didn't get the full benefit

We stayed here on our return journey from Venice to the UK, and chose it because it hosts a Tesla destination charger. The views on their website over the Seine valley, especially from the restaurant, looked stunning. The building is quite impressive, but has been rendered less impressive by a totally unsympathetic purple paint job. The check-in was interminable because the person handling it (who was NOT some 20-something foreigner but a mature Frenchwoman) did not have a clue what she was doing. One thing we were given was a menu headed 'La Carte du 20' which didn't mean a lot to us, but it did show the dishes and prices, which were not particularly cheap. We went walkabout and the view over the Seine from the terrace and the restaurant immediately behind it is indeed spectacular. Late afternoon the restaurant was (unsurprisingly) deserted but I did slide the door open to photograph inside and it looked very nice. Come dinnertime however when we returned it was still in darkness and this turned out to be because it is closed on Tuesday nights. Now I guess you could say this was our mistake for not checking this, but our booking confirmation email went into raptures about how marvellous this panoramic restaurant was. We were instead directed to their bistro restaurant across the road, called '20', which was small and cramped, ill-lit and bit chilly. So we ate bistro food at restaurant prices, with expensive wine (48 euros for a bottle of 2014 Corbieres). Unforgivably the plates were not hot and the food was therefore not particularly warm by the time it reached us from some diatnt kitchen. Incidentally we got the impression that the prices in the panoramic restaurant were significantly higher than in the bistro, so unless that quality of the food and its presentation were on a whole new level this would simply not be worth it.
We skipped breakfast on the basis that it would undoubtedly be an over-priced disappointment, and our early check-out by the same person was as chaotic as the check-in had been, including showing 2 breakfasts even though they probably hadn't even started serving it.
We were in room 4, which was small for the price paid, although it did have a nice side view of the river & valley below.
Would we stay there again? No.

Good stay, but a disappointing dinner this time

My wife and I stayed here last year and really liked it (I wrote an earlier review), even though we were staying in the annex across the road, not the main hotel. This time we had booked early to get a room in the main hotel with a balcony view over the river and it was magnificent, not only in the sunny evening when we arrived but in the morning with mist floating over the wetlands on the other side of the river. The room was spacious and comfortable. My wife enjoyed a swim and some pampering in the spa. Unfortunately we had chosen to stay on a Tuesday without knowing that the main restaurant is closed then (Mondays too I think, maybe it is closed early in the week only out of the peak season). We were redirected to the Bistro, an old house also across the road. This was a great disappointment. We got to it about ten minutes after it was advertised as open, to find it utterly deserted, except for a notice saying Ouvert. We found nowhere comfortable to sit and have a drink (there were tables outside on a lawn but the evening was too cold). We helped ourselves to a table and ten minutes later asked for drinks as someone passed by carrying stuff to the kitchen: the promised positive response did not materialise. We dined but my seabass was drowned in oil, with chopped peppers likewise swimming, and all of it only just warm. It was very disappointing. However, in the morning, breakfast in the panoramic restaurant was first class.

I am mobility restricted but access in the hotel was not a problem (there is an elevator). We might well stay again as we travel to or from a channel port but not if the timing means using the Bistro as the restaurant.

Rather strange place but with lovely staff

This is a difficult review to write, because this hotel is really a place of two halves. The building is lovely and in an exquisitely beautiful place. Last week we stayed in a similar building in Mont de Marsan, where they have got all the little details just right. Here, we were amazed that the building is painted in dark purple so that it looks more like an Ibis! So far, so unusual, but all the paint, especially on the stairs, is chipped and scratched and the carpets need changing. It really looks more like an Ibis inside - fine if you ARE in an Ibis - comfortable and well-equipped. Silly things let it down - no towels by the pool, trying to order a drink and the 'someone will be with you immediately' never arrived. If you like pools and spas, they are here although I didn't try them. ( Husband failed with the outdoor pool because of the towels! ). On the plus side, the restaurant Panoramique is superb. The food was wonderful and the staff are young, enthusiastic, on the ball and with a lovely touch of humour. Really, really worthy of the praise. The view, of course, is absolutely stunning, especially in the gorgeous weather we had, and getting a room, even a purple one, with a view of that IS worth the money. Sitting dining looking over the balustrade at dinner was a true highlight. In short, it isn't a 4 star hotel - but it COULD be. The rooms that I and my friends stayed in were all in need of painting and overhauling, and so is the main entrance hall. That isn't the fault of the staff, who are charming, but it IS a management issue. If they did that, the place could charge twice as much!

Stayed with a couple of colleagues, some of us in the main hotel but I was in the separate building. The main hotel is beautiful; great grounds and view, and the rooms I’m told very comfortable. The cheaper rooms in the different building are much more basic and don’t have too much to get excited about. They are not cheap, just cheaper. Next time I’ll make sure when booking that I’m in the main hotel. As I was working I did not get to use the facilities, but the leisure areas looked well worth a visit. Great hotel – just make sure you are in the main part.