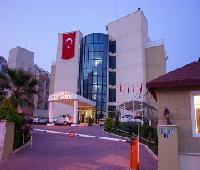 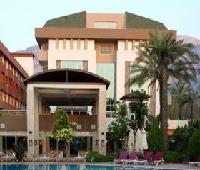 at rose resort we spent 10 days from 18 Aug 2014. back in 2010 we stayed in rose residence and decided to save a little money this time, so from this point it was definitely worth it.
location is indeed very nice - not too close to the center (with too much people and cars), but yet not too far. the walk to the beach takes only about three-five minutes and is beautiful.
we've been given room 1731 which had yay! a lovely view on the mountains. still there was a noise from hotel animation (i.e. dance) area till twelve and there were tons of mosquitoes! so i recommend to bring ear plugs and anti-mosquito equipment, if you have problem with that and if you're afraid to catch a cold from conditioner use the balcony curtains. if you travel by three be ready third sleeping place will be a little less comfortable, for they only have two family rooms. but it was not bad though. as for cleaning it was honestly no good, maybe we should'be tipped it better, idk :)
hotel territory is quite small, with sheesha lounges and little terrace - the view on mountains is spectacular! from the first night try to occupy tables in time to have dinner in it (or at least near the pool).
there was no kids animation at all. and animation for adults was not fantastic either. there were people from Turkey, Georgia, but 80% from Russia (no comments here). hamam and massage was not bad, if you wanna enjoy for real don't take $33 Pegas selling 15-min long and pay 40 smth for a longer time, it really is a good thing.
all personnel was really really nice. special thanks to front desk manager Mehmet for being very helpful and friendly, and helping us out with Aura number. pitifully did not get a chance to get your facebook address - so in case you see this, totally looking forward to add you in the friend list :)
guys, hotel dancing is really small, go ahead and visit club Kristall via Pegas - it's fabulous! and also Aura if you hadn't been there before. if you're real party people - in 2014 choose Kemer Dream Hotel - they have contract for free entry and transportation to Aura.
the food was fine, the same every day. surprisingly no deserts on breakfasts, just bakery and we haven't seen any ice cream :( or baklava, but since i am not a fan of it so could not care less. like in many turkish hotels there was no good meat, and fish was so so, but chicken was nice. veggies and fruits were all fresh, and choice of dishes was big i mean you would love it in general - typical turkish cuisine, very delicate and healthy.
people from 3* rose hotel dined in our hotel, while we went to their pool - 50 metres close and not crowded at all, while in rose resort there we very few deck chairs. do not bring your towels with you - they sell for $1 very light towels for deck chairs at the near market, and white towels are not allowed to be taken out the rooms.
in general the hotel is recommended for people without kids, in a good mood, who do not require anything extra and satisfied with great location, view and nice beach.

We stayed here for a week. We would like to say that we spent really nice time here and all support stuff was very helpful and friendly.
Everything was fine only one Manager (Saban bey) was really rude. We understand that he works here for 20 or 25 years... And we hope that in near time he will be more friendly :)

The Rose Resort hotel athough states that ıt ıs a 4 star hotel I would rate ıt an average 3 star hotel. The food ıs my bıggest dıssappoıntment as comıng to Turkey I had hıgh expectatıons of excellent food. Processed meat at every meal ıncludıng breakfast was sub standard and hard to dıgest. The all ınclusıve bar ıs caterıng for ıts 95% Russıan clıentele. There ıs vodka vodka and more vodka. The only varıatıon beıng watered down beer (served ın paper cups) and the local drınk of fırewater Raki. Rooms were ok and the chambermaıds excellent ( partıcularly Gulusen). The hotel ıtself was not bad but lackıng ın entertaınment and other Englısh speakıng staff or guests. I would suggest eatıng out and goıng ınto the local town of Kemer whıch ıs a short cheap rıde from outsıde the hotel. overall ı wouldnt book thıs hotel agaın. but kemer ıtself ıs lovley. espıcally ıf you came to shop and love hagellıng!! good luck

The outside of this hotel was quite impressive and the communal areas are also quite nice but we were very disappointed with our room- it had 3 beds crammed in(we only needed 1 double), the wardrobe was tiny and was badly planned so the hangers didn't fit properly! I used the spare bed as a place to lay out clothes but it was very hard squeezing around the room to get to them. We had a balcony door but with no actual balcony, just a drop to what looked like a rubbish tip at the back of the hotel. With no-where else to hang our towels ours dropped off the railings quite a few times and had to be retrieved from the room below! I think we were given one of the worst rooms, not sure why but it may have been that we were in a tiny minority being British as 98% of other guests were Russian! Our room was also just outside the lift door which felt very strange and not at all private. The bathroom wasn't as clean as I would have liked but this was partly down to again very bad planning and bad workmanship, there were places no-one could have reached to clean and loose plaster, patches of mould-like stuff etc. The carpet wasn't great either but the cleaners were very friendly and always left petals on the bed which I thought was sweet.

The food was very good with a large selection of starters, salads and hot food buffet style as well as a few dishes being freshly cooked by the swimming pool each day. The food was extremely fresh and we were amazed at how inventive the chefs were and how many different dishes they could invent. I have never been to an all inclusive place before so have no where to compare it to but I was put off by the fact that it is very canteen like. Dinner only took about 45mins and we were slow compared to the Russians. We have always eaten in restaurants on holiday where it is a much more relaxed experience. Local drinks are included but the wine was absolutely disgusting so that left either vodka (wonder who that was catering for!!) beer, or very sweet syrup type juices. I stuck with water! It was a shame for the hotel because with so much free drink we still saw many guests filling up bottles or stockpiling drinks in their room either for when the bar was closed or to take to the beach. That what I call taking the p***!

There is a "private" beach that is shared with a few other hotels and I also found this disappointing. The beds were fairly old and tatty and they were all full by about 10am. The good news was that they were empty again by 11.30-12 as there was a mass exodus back to the hotel for the free lunch and more drinks! We often missed lunch as we had only just had breakfast. There are free drinks available about 100metres from the sunbeds which basically consisted of a cuple of big fridges with bottles of coke, a container of water and more syrupy juice. Not really my cup of tea!

The hotel is about 20 mins walk from the centre which is fine but it was very hot when we were there and some nights we got a taxi. We actually booked with Great Late Deals which showed our hotel being in the centre and we then got very confused as there are a number of hotels with similar names but beware as it is definitely a fair walk and not suitable for people not able to walk that far. Make sure the taxis turn on the meter because 1 night we were had and thats with one of us being Turkish! I found the shops very expensive compared to the rest of Turkey and again very geared up for the Russians with very fake looking, expensive designer gear(apparently they love it) and prices in dollars! (or euros- we stupidly had taken turkish lira!!!!!)

According to the Turks this whole area is now predominantly Russian, and while I have nothing against Russians I would rather have seen a mix of all nationalities with some Turks, otherwise I would have gone to Russia!

I wouldn't recommend this hotel or this resort to anyone and in future will be researching a resort much more before booking.

As soon as i arrived at the Rose Resort Hotel... I knew it was a big mistake to book it.. After checking in i was led down a dark (carpeted) corridor to my room. As soon as I opened the door i was met with the heavy smell of cigarettes. I gave up smoking last year but thinking back to being a smoker, even then i would have found the smell too much! The view from my room was a wall.. I was then moved to a balcony room over looking the main road, which still smelt of cigarettes and also the balcony door did not lock.. I stayed one night and checked out the next morning to stay in a hotel on the seafront.. Do NOT stay here