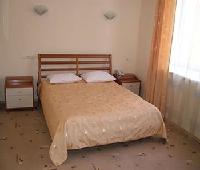 A Russian Hotel in Russia

This hotel is located right on the bank of the Volga by the old part of Samara. It is a relatively short taxi ride from the railway station. The rooms were neat and clean but somewhat small. Breakfast and supper were included in the price. The brekfast was more extensive than supper. Both were of the typical Russian variety. The Wi-Fi here worked quite well, better than a more expensive hotel in Moscow at which we stayed. The staff was helpful but did not speak much English. If you want to walk in the old town or along the river, this is a great location. For what it is, a former Soviet hotel, it does OK.