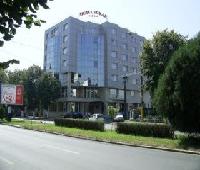 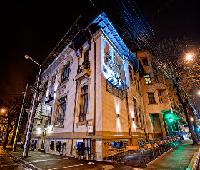 The staff were friendly and helpful. That is the only thing good about the hotel. Location is rubbish. Rooms are really out dated and of poor quality. The air con did work. The carpets were stained, marks and stains on the walls. Mildew in bathroom. The bathroom was clean though. I did not have breakfast, a colleague said it was rubbish. If you stay there leave hotel turn right, walk for about 10 mins there is a place that looks like a big hop which is open 24/7 and ops site the big top is a really nice cafe, only open normal hours. It's says 4 star, definitely not. It's over 100 Euro a night , not worth it.

This hotel needs to be renovated

Very difficult to find, even using Google Maps guidance (we passed by twice). Small room, old furniture (scratched on the tables!). Everything is old, as if time freeze there. Dust in the ventilation system of the bathroom. Otherwise, clean room and sheets. If you have no other option, you can sleep there for a night, but not more.

The worse hotel ever!! DO NOT go there!!

I never imagined that such a hotel could still exist and be rated as a 4star.
We had an event organised there and everybody was shocked!
The walls are dirty and the painting is scrubbed, the floors are dirty, there were flies near the area where coffee was served, at the ladies room out of two toilets one was not working, Nobody cared about our observations.
The restaurant is underground and has no natural light and food looked bad.
I do not want to imagine how the rooms look like.
Whatever you do, do not go there !!

It is a horible place with the dirtiest oldest rooms I ever seen.
No hospitality.
The restaurant is dirty, the food is poor.
The manager and the employees are bad-mannerd.
For example, in my room I found food in the fridge (!) - it was food from other turists...
The walls were dirty, the bad dirty, a lot of mould on the walls, the carpet with holes and so on.
Total disaster.

I think its poorly managed. The personal works only from 9-5 thats wierd. The safe doesn t work at all. Its all a joke. Everythind is old fashioned and bathrooms are not so clean. Its not worfed the stars.