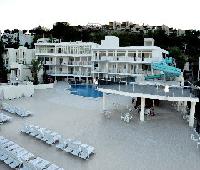 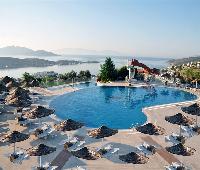 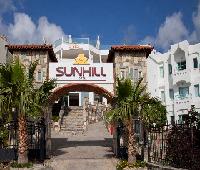 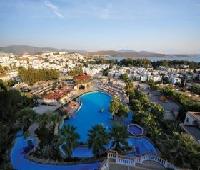 Stay away from this place

First of all the staff don't speak any English and they don't even care about any of your queries.
The rooms are filthy,old and actually rather sleep outside.
All inclusive????Me and my partner almost got a heart attack when we first went for breakfast....absolut disgrace...when we've dared to ask for coffee we've been told there is no coffee.Lunch???won't even worth to comment.So we've decided we will get some drinks instead at the pool bar..where we've been told that there is no vodka sorry we can't have a cocktail.So went to the snackbar for some Turkish pancakes or sandwiches(as it's advertised),but staff told us that only burgers and chips we can have.I wouldn't even describe the burger we got...and the cleanliness issues and the way they store food is another storry. Since we are eating out and try to stay away from the hotel as much possible,but I find it absolutely dissapointing that no-one and I mean noone cares about how bad this hotel is and that they get away with it.Taking innocent people money for nothing!!!So if u don't want to ruin your holidays don't ever choose this hotel!!

Where do I begin....got to the terribly lit hotel found our way to the reception to be greeted by a rude couldn't be bothered attitude nor speak basic English(here's where I add my partner that's half Turk speaks fluent Turkish) It was 5:00 in early hours of the morning pitch black climbing up & down uneven stairs and stony steps with our luggage the receptionist couldn't find the room and when "we" found our own room horror-fide is putting it politely! The door was hanging on by one hinge and frame had damage from previous break ins, you could only close the door when kneed & lifting. the glass in the door was unlocked at all times and security screen was hanging on by 1 screw. In the room we were greeted by large moths, cockroaches a lizard and dead bugs everywhere. Thick black cobwebs were all over the place, marks on every wall, dangerous plug sockets 2 small single beds with white sheets I'd call "human excrement",were stained the marks were indescribable. the bathroom was filthy, shower screen & tray hadn't been cleaned in a long time not even the simple wipe of the toilet seat or basin. Sink leaked everywhere while tap was on. We immediately asked to be if there was any other rooms but were told no, and to wait till the afternoon. We laid awake for a couple of hours until the morning came.
The all inclusive food consisted of 3 choices 1)soup 2)aubergine & peas in a tasteless orange sauce 3)chickpeas & potatoes also in the tasteless orange sauce. To call it "slop" is an understatement! There was rice and salad to choose from though!
The all inclusive bar included flat beer that tasted out of date or vodka mixed with tap water as the coke,fanta,sprite never worked nor did the other soft drinks to choose from the "help yourself" machine that's when the power was on. The staff around the pool had my partner in tears one day as they spoke about what they'd like to do to her and other women/girls alike.
To say I had an experience it certainly was, The royal panacea should be knocked down, lovely views from the pool terrace but this only made me/us envious and get the sinking feeling this is where you could of stayed!
There's so much more I could write but I feel I've said enough. If your thinking about booking here or talked into it no matter how little the cost I'd say just get a flight and then stay on the streets at least there hosed down everyday!!

Stayed here for a week with two friends. It was manageable. Up a steep hill, lots of dangerous stony stairs all over the hotel. Food was rotten - we had booked all inclusive but ate their once. Drinks rotten too - we never drank there. Room was a good size, almost like a suite. Downside was there was dead insects everywhere, faulty taps and faulty wiring. But if you only want your hotel to sleep in, then this hotel is fine. Very nice security guards, carried my friend to our room over all the puddles when she'd had a bit too much to drink :)

This was a palace compared to hotel we was in and had to move from. It was clean and there was food (there was non at previous hotel) The staff however were quite rude and lots had sticky fingers. We noticed the cleaner had helped himself to half of our holiday money and when we told reception they were not interested at all. Heard many bad things about this place since we left but apart from the theft we actually got to really enjoy our time there. It was a few years ago when we travelled.