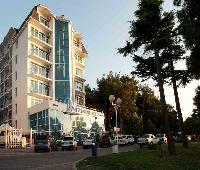 Good Hotel for 1-2 nights in Gelenshik

This is a reasonably good hotel and probably one of the best value for money that we found while searching for a Hotel in Gelenshik to stay for 2 nights.

The rooms are big and clean and the service was quite good, on request they added nice beds for our children in the room and we were very comfortable.

The pool is also big enough to be refreshing and is open till quite late, most rooms have nice balconies to the pool side. They also provide towels that you can use in the pool or take to the beach. The only negative with the pool is lack of sun, since it is surrounded on three side by the hotel and by the neighboring building on the other.

Taking the room with breakfast included is probably not worth it, the included breakfast was very "soviet" style with only two menu options to chose from and in most cases including porridge or pasta...Better to pay for breakfast, the omelet with ham was very nice and it was less than 100 rubles, so pricing is very reasonable.

The other minor issue is that some beds in some rooms were very good, but in some other rooms they were already requiring replacement of the spring and mattress.

The biggest problem in my view is that due to the un-managed construction around this region all the direct routes to the beach are closed and the walk is quite long form 10-15 minutes.

Overall we stayed here 2 nights and we stayed 1 more night coming back from Anapa to Sochi, we would stay here again for short stays.