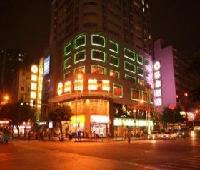 We visited cantonfair in October, and stayed here for the week. Plus for the location, but that is about it. Lobby, elevator and hallways were INCREDIBLY dirty. I'm not joking that it looks like it has never been cleaned. The room was nice and "chinese-luxury" furnished, but again, cleanliness was a big issue. As we arrived the room smelled really iffy. Carpet has stains, bathroom shower has hair. AC works, but smells like mold. No window in room, allthou this is quite common in China.

Plus for clean beds!

One night I could not sleep as there was the constant sound of water running through a pipe in the ceiling right above my head the whole night. There was a hatch there, I opened and saw that there was no kind of insulation or anything around the pipe, as if it was inside the room. The "mini-bar" in the room consists of water, alcohol, nudles - and two packs of condoms! Makes me wonder what the iffy smell in the room when we arrived was all about.

This could have the potential to be a nice hotel. It is quite nice built - but it is managed and cleaned so poorly that I just cant recomend it.

nice hotel in good neighbourhood,the rooms were nice , i had no problems ,staff were very friendly and helpfull at the front desk and could speak english ,i was room only but there was a restaurant there with buffet i would visit this hotel again.it is close to shopping and many restaurants

Nice, but need to speak chinese a little.

Fortunately I was learning chinese since 2 years ago. If I didn't surely would have been frustrating. Is near to metro station and the service attitude is nice. The rooms are clean. The breakfast has no variety. However, there is a manager that never smiles. If you don't speak a little chinese (or local language) is not the best option. Employees make their best effort to help you, but communication skills are poor.