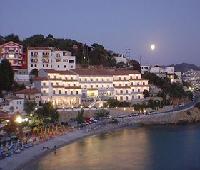 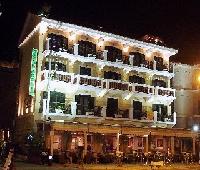 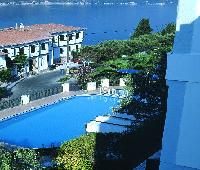 I was guest of the hotel for 10 days this month. Hotel has very nice position and sea view from all rooms. It has nice big terace near reception where you can take a drink and enjoy in the evening. Rooms are average, but clean. The only one thing was bad and that is the food. We had paid for breakfast and dinner (HB), but we had to eat outside in the city restaurants since the taste of food was very bad in the hotel. Every day the breakfast was the same with few options to choose (eggs, sosages...). It will be nice if hotel improve this area, since the hotel is situated on the very nice small Gagou beach.

It is a very nice hotel. About 15 min. walk to downtown Samos (Vathy). The hotel and room are clean. Bathroom is a small one, but functional though.

All rooms have sea view.

The hotel is next to the very nice beach Gagou. And has a beautiful balcony with a sea view in restaurant and bar.

What should be improved is food. They use quality ingredients, but usually they ruin them with bad cooking. Especially for dinner.
If they improve the food, the hotel can have 4 stars on tripadvisor easily.

This way cant have more than 3,5

This is an average hotel with the average hotel paradoxes. It is clean but worn. The staff is competent but merely courteous. There is free WiFi but difficult to maintain a connection. Very hot water but small showers with shower curtains that cling to your body.

It absolutely works...but this is a two or three-star hotel.

Of course, it is right on the harbor with good shopping on the street behind it, good views of the bay (if you get that side of the hotel), and plenty of places to eat and drink. This is not as touristy, trendy, or as scenic as Pythagoreio on the other side of the island. Many that stay here end up taking taxis for the day. This is a working port that is less protected that Pythagoreio, and so most sailboats, marinas, and associated services are there.

Still, we were able to walk off the ferry at 1000, clear customs,walk 150m to the hotel, and check-in immediately to ready rooms. Afterwards, we could walk another 100m and rent a car. So, location cannot be beat.

Finally, we only ate breakfast here, so can only speak for that meal. But, there was plenty of well-presented, tasty, food catering to Greek, British, and American tastes. Coffee was okay - but there are also a number of gourmet specialty coffee shops within a five minute walk.

Booked half board, but the kitchen was not in use. Buffet breakfast was cold, had to beg for something hot. So lady came in and cooked omelette on a camping gas stove. Tinned tomatoes and reconstituted bacon followed. We had no idea what the evening meal was going to be as it was cooked not on the premises, but brought to us by motorbike when we gave them a time we would be there, consequently it was always only mildly warm, mostly cold. We even had left overs from their easter day dinner one evening. It was the worst food I have ever had in Greece. They should not have accepted our booking if the kitchen was being repaired.

Why are there NO signs anywhere?

This was a big hotel, new and perfectly nice, but there were absolutely no signs to get us there from the main road. We were lost circling around for half an hour. Eventually we saw one faded sign which looked like it had been taken down by the back of a large building - this turned out to be the hotel...! The entrance is the slim slight uphill lane right by Gagou Beach...

The hotel's address comes up as "Main St. Samos" but the street that you drive on to get there is a far cry from being any kind of Main Street. The GPS doesn't get you there either.