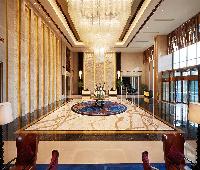 When traveling in this part of the country you can't go with high expectations. This hotel is acceptably clean and comfortable. Room size is good and bed was soft enough. Breakfast is edible but not so many western choices. All in all I would stay there again if traveling in Huai'an

I spent one night here during a business trip in the area. I was surprised of the overall quality, which also in the big hotels is sometimes scarce in China. The room was huge with a big window and the bathroom good enough. Front desk staff should learn english though.. In conclusion, excellent price/quality ratio for the location.

I have stayed here a few times but recently have stayed at the new century.
Tried it again but nothing has changed rooms too hot, bathroom had a shocking stink which didn't go away even after complaining.
Room absolutely foul with cigarette odour.
Complained through my Chinese interpreter but as usual no action.
Gym had stationary bike but pedals broken...
Bar was ok, free pool table.
Foyer toilets foul odour and not cleaned.
Location is good but I won't be back

Adequate for a remote location

They try, they really do. I don't have high expectations when booking a hotel in a pretty remote city. If I have a relatively clean, safe, bedbug-free place to sleep, I figure I'm ahead of the game. San Want certainly met those needs, and the breakfast offering was better than I expected. To put it briefly:

Good: breakfast was pretty good, and for dinner there's a good Korean BBQ restaurant in the nearby Wanda shopping mall- just a short walk away.
Bad: The beds are rock solid!
Ugly: They need to take a plumbing course. My shower drain didn't work & quickly flooded the bathroom floor & entryway. Judging by the old damage on the bathroom door & entry wall, this was far from the first time.

On a recent trip to Huai'an I booked a room for a couple of nights at the San Want Hotel based on the TripAdvisor rating of #1 in Huai'an.

I've stayed in a lot of hotels in China over the years, but the San Want is definitely not one of the best. In fact, I'm surprised at the TripAdvisor rating.

In the room, the carpet was dirty, stained and had many cigarette burns on it. The washcloths were threadbare and actually had holes in them. The furnishings in the room were all well-worn.

In the morning I went down to talk to the manager. On the way I ran into a couple of German tourists who had the same problem in their room.

The manager was not helpful. He first told me that the system was being worked on. I pointed out that the "public" areas of the hotel were cool. He acknowledged that and finally admitted that they do not turn on the air conditioning for the guest rooms "until it is hot outside". I told him that the room was hot, no matter what the outside temperature was. He offered to move me to another room, but I knew that wasn't going to help after talking to the other guests. His final answer was "sorry – just open your window". The window is about 12" wide and just outside is a massive construction project.

It is apparent that for all the marble and chandeliers and glitz of the hotel, there is little concern for guest comfort – they are just trying to save money by not turning on the air conditioning. This is a city of 5 million - surely there is better choice than the San Want! I won't be back!