-shelestoff Is A Modern Hotel Located In The Historical And business Part Of The City. Shelestoff Hotel Is A Perfect meld Of Modern European Style And Russian Traditions. There are 44 Rooms- All Facilities For Comfortable Staying In every Room- Electronic 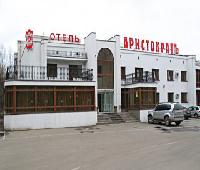 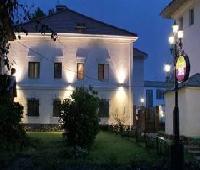 -shelestoff Is A Modern Hotel Located In The Historical And business Part Of The City. Shelestoff Hotel Is A Perfect meld Of Modern European Style And Russian Traditions. There are 44 Rooms- All Facilities For Comfortable Staying In every Room- Electronic

A Hotel in Historic Industrial Area

First off, I'd like to rebuke some other reviewers' remarks re: the property's location: Yes, it's in an industrial zone of the city... close to the famous linen factory, but not in an uncomfortable way (about 5 mins walk). The railroad that runs past the hotel is an apparently non-functional commercial line which ends somewhere at another factory, which has been closed since the 1990's. So hey, you can let our children play outside if you want to, no harm should come to them.
Another comment on location is about roads and the proximity to the city center: Yes, there are some residential roads around not in the best of shape, but only if you follow the GPS directions as blindly as I did upon my arrival (but then, this is how I found the still-functioning linen factory and a small shop attached to it, so one might want to look around the area, it's worth it). In reality, the hotel is a mere turn away from Simanovskogo street which does straight into the central square (about 15 mins walk along it, with the last couple minutes being in pedestrian zone), so you'd like to follow that one until the end and turn right.
I liked my stay, and haven't found any discomfort during it. It wasn't particularly noisy as some other people stated, but that might be because my room was on the topmost floor and didn't face the entrance and the outdoors cafe, provided there was a wedding reception one day. Speaking if which, it's good, but one needs to be prepared for the food to be made fresh (which takes time). The breakfast was fine, and I'm not calling it great because they only serve instant coffee at it.
The staff is rather helpful, the reception works until late and there's always somebody to help with your requests even at midnight.

I'm writing this review from the Shelestoff Hotel because I successfully managed to log on to the Internet from my room (absolutely free of charge) and it's working. I didn't expect much from this hotel but I was pleasantly surprised by the beauty and cleanliness as well as by the level of service. I've been to quite a lot of European countries and I can say that this hotel deserves its 3 stars. The rooms have all necessary facilities including a colour TV set, a small fridge and mini-bar, a private bathroom with a hairdryer as well as a telephone. The rooms are rather spacious and you have plenty of space for your belongings. The restaurant is perfect: very beautiful and the food is tasty.
The rooms are warm ( I would say even hot). And if you want, you can enjoy a sauna and a small swimming pool (for extra charge = approx. 8 euro per person). I would say it's a real European hotel.

Exceptional hotel in a charming town of Kostroma

I stayed at this hotel in August 2010. We came from Moscow to escape from the heat and smoke from forest fires, the hotel was a very pleasant surprise. It has very well equipped and air-conditioned rooms with very comfy beds, very attentive staff, good breakfast included in the price. It has also a guarded parking outside the hotel. The restaurant has a very good selection of Russian and European dishes, lunches are of exceptional value. It is a small hotel with very caring staff. The only drawback to mention - the lack of lifts in the building. It is privately owned. Excellent location to explore the wonderful city of Kostroma with its monasteries on the banks of the Voplga, beauitiful churches and a very well preserved old city centre. Ipatyev Monastery, the craddle of Romanov's dynasty, is a must to visit, Other cities of the Golden Ring are not far away. I would recommend this hotel to anyone.