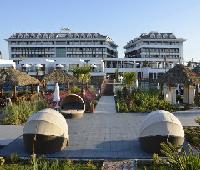 The best hotel for honey moon!!!!!it's very quiet and relaxing! The food it's very tasty. The pool it's also amazing. The staff was nice and very,very hospitable. I would like to come back. I recommend this hotel.

Good but not the best

Nice, quiet property...a bit too quiet perhaps. Very well kept and clean. Caters mostly to 55+ German crowd. No activities for younger. Nothing much is going on...kinda boring. Staff is friendly and attentive, food is mediocre at the buffet, much better at A la Carte restaurant. Drinks don't even give you a buzz and they charge you for drinks after midnight. In between meals they claim to have snacks but they're nowhere to be found. Spa is nice. I personally wouldn't go back but that's because it didn't cater to my needs not because it was a bad hotel.

I've been to a few Antalya resorts and this one left me painfully disappointed. First of all it's not even in Belek. The property is an hour from Antalya airport in a deserted neighborhood. No imported alcohol is available - instead cheap knock-off local brands are used to replace everything you'll easily find elsewhere from for example Sprite to rum. There's a skeleton staff running the place and the food isn't that great. Variety of food wasn't great and feels like a hostel.

We stay in september in our honey moon. Hotel was nice, food amazing, staff also very nice but when we arrived we inform reception that we are in honey moon and they said that our room will be very nice (special) but no..it was a normal room, nothing special, shower gel and shampoo it was half used by previous guest maybe. Also everybody spoke Germany and is not really nice. We wanted to go in Antalya but they said that everybody speak Germany so we didn't go anymore. Swimming pool was very nice and very quiet.

Holiday was fine but didn't enjoy food very much to much foreign food no English variety at all , it was too far from anywhere to walk so stayed in hotel , the pool was very cold also everyone spoke German even the exercise in the pool