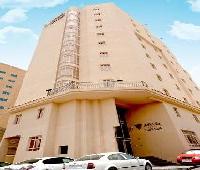 This hotel server best Naans and Pakistani food, try Champs, its bad to see that there is no seating place anymore due to its renovation, but you can still place order and pick it up, try qulfi as well.

This is one of the best hotels in Doha, Qatar. We visited two times alongwith my family and friends. Excellent foods particularly the BBQ, Kebabs, Biryani etc. Very neat and clean and having outdoor sitting arrangements too, but now a days some demolition works ongoing there probably for expansion.

Finest BBQ - Best in Doha, Better than anything in New York, or Lahore!

I haven't stayed in the Hotel - but I have been to Shezan more than 20 times.
It has the best BBQ in the GCC, and even better than what one can find on the indian subcontinent. Abazzi Sahib, the grill master - and master chef deserves the credit and praise.
Order the chops, order the lamb karahi, end with kulfi (ice cream made with milk [not cream] and rosewater, pistachios. The food is legendary. It's a cheap thrill.
The chops are of the highest quality meat - and are perfectly cooked on live charcoal - and arrive at the table always sizzling. The Karahi is a rich and substantial dish. The Kulfi is made with milk that has been concentrated by evaporation. Everything is authentic and surpasses expectations. Why eat Hotel food - when you can benefit from the wondrous ethic vitality of Doha. Pay attention to where the non-european, or US ex-pats eat - and benefit from the parallel economy. If you like spicy food, Shezan is a place not to be missed. It is a cultural treasure. (I am a US Citizen from New York). The food is great.

I am a regular business traveller to the Middle East and more often than not my accommodation is pre booked for me as was the case on my last visit to Qatar. Unfortunately there was a change in my circumstances and as a result I had to come out to Doha a day early and as is often the case in this city accommodation at the last minute can be difficult to find. I found myself at 3-30am after a long flight and connection in the Shezan Hotel Doha. The hotel describes itself as being in the old town and if this conjures up images of winding bazars, the smell of cinnamon, wizened old men bartering over carpets, and ladies in veils selling pomegranates then you would be mistaken. I knew that the portents were not good when (and to be honest this is more often than not the case in Doha) the taxi driver had not got a clue where the hotel was. With a combination of pigeon English and google maps we eventually found it. When I saw the hotel I immediately had a sense of foreboding and upon entering the 'reception' area that sense of foreboding was well founded as the first thing that hits you is the smell. The 'hotel' as I was later to discover primarily caters to the migrant worker population and as many of these people are from the Indian sub continent the over riding smell was of last nights curry. Add the smell of strong cheap cleaning products, a touch of sweat and some decay and the overall effect is one of nausea. Things generally in Doha are never particularly easy at the best of times, therefore I was not expecting the check in process to be plain sailing and I was not disappointed. There transpired to be a record of my booking although the gentleman on reception could not initially find it and upon finding it eventually, did not then know how to translate that to giving me a room key. There was further confusion as to how the bill was to be settled (the room had only been reserved on the company credit card!!), my passport was taken away from me and put in a drawer (against my protestations), and the hotel had somehow now become my 'sponsor' A member of the hotel staff who by his tiny stature I took to be Sri Lankan took my 25kg bag on his shoulder and escorted me up to my room which when he opened the door transpired to be more of a dormitory. He proceeded to open cupboards, check curtains and bizarrely pointed at the Doha equivalent of the yellow pages and a phone that would not have looked out of place in a 1970's sit com. Tiring of this performance I ungraciously opened the door and ushered him out. The room although quite large had three single beds belighing its true status as a doss house for migrant workers. Everything within was either dirty, broken, old, decaying or a combination of all four. Amusingly it had an heir of gaudy kitch. I selected the middle bed bed in which to rest my weary travellers body and felt as though I had received a sharp blow from a blunt instrument to my coccyx such was the consistency of the mattress. I poked and prodded the remaining two beds but wearily accepted that my nights sleep would be an uncomfortable affair sleeping on something akin to a breeze block. It was. The washing process was a tumultuous affair as the showers thermostat only gave me two options, that of either very cold or very hot although given the dilapidated state of repair of the bathroom fittings the fact that water reached head was a marvel in itself (maybe this is why my Sri Lankan friend was pointing at the yellow pages). Suitably un lathered and rinsed and having made the decision that I would forgo the generous offer of breakfast for £10 I made my way scratching past the discarded beds, mattresses and broken furniture on the stairwell to reception to initiate the checking out process. I let out a little chuckle and took a picture of a gaudy little framed tapestry that proudly pronounced 'SHEZAN HOTEL JUST LIKE HOME' It was never going to be easy and thus it proved so as the hotel had a policy of a minimum three nights stay that had to be paid for should you take it or not and as they had now become my 'sponsor' getting my passport back was as easy as trying to take fresh kill from a pride of lions. After a phone call to Dubai the bill was eventually settled to my 'sponsors' satisfaction and re united with my passport I made my way to the front of the hotel and hailed a taxi to freedom. This place is absolutely, indescribably disgusting but it is what it is which is a hostel for migrant workers who have little money and no expectation. You would need to be clinically insane to book this cesspit of your own accord and if it is booked for you then, well be afraid. Be very afraid.

very good value for money in overpriced Doha.Spacious clean rooms.reasonably priced indian cuisine room service menu.good for a quick business stay if you have a rental car.(Doha is not a walking city anyway). Has no gym or swimming pool but you do not expect much for the rates. internet is dial up for a charge which is a tad inconvenient.