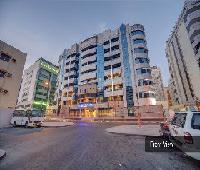 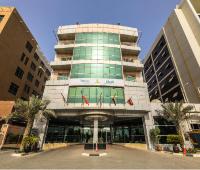 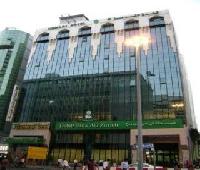 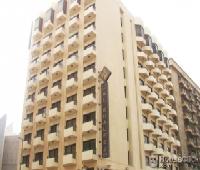 Definitely not a four star

The only positive point of this hotel is its location and proximity to Al Rigga Metro Station. Poor rating is based on the following details. We just came back yesterday from Dubai.
I stayed with my wife and toddler baby for 6 nights on a half-board basis.
- On first day, there was no lunch on arrival because it was still Ramadan though we had paid for it. After a short talk they agreed to bring some rice and curry they had in the kitchen.
- Buffet was very repetitive and very limited specially breakfast
- Carpet in the room was very dirty
- It's a very old hotel
- Swimming pool in the roof with no disabled access and high rise steps.
- You're not allowed alcohol in the hotel at all and they serve none of it.
- Toilet inlet was leaking and despite their attempted to fix, we were to put up with it for three days before agreeing to give us another room. Even after that, manager came and removed the two complimentary bottles of water from our room instead of compensating us for all the problem of changing room.
- Noisy room next door with loud music next door 5am.
- In one of the room down the hall to us, somebody had actually thrown a party in the hotel room. Thankfully too far for the noise to reach us.
- It gets very noisy on the roads around the hotel due to concert and everyone in Dubai tents to use their car horn every two minutes, so not good sleep at night. Windows are not sound proofed.
- This four staff hotel doesn't even have a proper coffee machine, but instead they use instant Nescafe racket in their restaurant.
- The swimming pool shuts down at 7:30pm and sunset is 7:15. It's so hot in Dubai specially in June that you can't go swimming during the day and it's best to go swimming after 7. So no point in having a swimming pool that closes at 7:30pm.
- The only one shade in the pool area was broken.
- WiFi kept disconnecting so they had to come to reset every time
- No WiFi access in the lobby.
- Washing machine dyer never works, because the AC is not compatible with the machine machine made. It gives an error. Same issue in all room.

List goes on... I would never go back and this stay even questions whether I would ever want to go back to Dubai. Turkey much cheaper and far better hotels for the money.

6 days visit to Dubai with my family

The hotel location was great, just a 5 minutes walking distance from the Al Rigga Metro station, fantastic plz to be, very close to Al Rigga road and the restaurants very near by, car parking facility also available if needed.

Around the corner dry cleaning, super market, plenty of take away plz also available, hotel rooms are clean, house keeping was great, very friendly staff, very helpful, quiet . the kitchen needs to be filled more more cutlery, forks, glasses, and cooking appliances if needed, the fridge is clean and more space, washing machine is working condition, if you any one planning to stay longer than 1 week, make sure check with the hotel manager about the dryer. the hotel room got plenty of sunny, Internet (wifi) was great.

It was good. But wonder why they charged for unused bottles of water...🤔🤔🤔🤔🤔Very good breakfast but can do with a little change of menus. The man sitti g in the corner for desert safari was amazing ...was a PRO

The mirror in the bathroom was not functioning. The staff removed the mirror to fix it. It then caused the hairdryer to stop working. The staff did not bring a mirror back nor they fixed the blow dryer! The bathroom never had enough toilette paper either. The power outlets were insufficient in the bathroom and the room itself. In the bathroom, I could not use my flat iron. In the room I had to choose between the kettle and the microwave!

a 3 but bordering on bad

I and a co-worker stayed here for a business trip. we stayed at their deluxe 2 bedroom unit which is relatively nice. Felt like a normal high rise apartment, exactly what you'll see in the pictures from their website. The couches in the room are a bit old though, TV channels are about 400+ but you'll only get 4 or 5 English channels so you'd rather stay out. Breakfast meal service is what makes the service bad, as you'll get to see the same set of food everyday, and are not in anyway great tasting,, but the dining crew are nice so they made up for it. Reception/hotel lobby service is not the most ideal, but you could see that they atleast try to be friendly (emphasis on tried). Tourism tax is added on top of your bill, but i believe it's the same thing with everywhere else in there. On a positive note, the hotel is smack right in the middle of al rigga, which is like the most accessible area in the city, few stations away from the north and or south. a lot of food and shopping places in the area as well. so if you plan to just get a room and stay outside to explore the city then come back in to sleep, then this place will do. (emphasis on will do)