Our New Motel Was Built 2002. All Rooms Are equipped With Shower / Toilet, Sat-Tv, there Is A Internet-Terminal In Our breakfast-Room For Free. Garage For Free please Note That The Front Desk Is Open Until 10 pm. 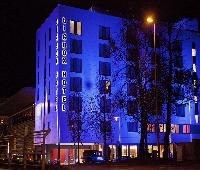 Our New Motel Was Built 2002. All Rooms Are equipped With Shower / Toilet, Sat-Tv, there Is A Internet-Terminal In Our breakfast-Room For Free. Garage For Free please Note That The Front Desk Is Open Until 10 pm.

Good for a one night stop over

We arrived around 22:00 and as we'd informed the hotel we were going to be later than 22:00 they'd provided us with a late check in code. After battling with the check in machine in the lobby the night porter requested my name and pointed me to the lockers on the opposite side of the lobby one of which had my surname on and the code I'd received unlocked it to reveal our room key - Not a very clear system. The room was very clean and quiet and we parked right in front of the door to the hotel. The beds could use an upgrade as aren't they that comfortable and we ended up leaving earlier than planned in the morning as we couldn't sleep any longer!!

We were instructed to report to the breakfast room to pay before leaving (we didn't have breakfast) but only the breakfast server was there and pointed us to reception which was closed. We dialled the number for late night check in assistance on the front door and a lady came to take our payment at reception - again not that well organised. This sounds like a grumble and we really did appreciate the warm, clean room after a long drive, but it could have been a lot better.

Stayed for 1 night as a stopover as close to the autobahn. Very friendly reception who had arranged for a late check in for us - but in the end we didn't need it. I asked for an extra set of pillows which were provided with no fuss. We had dinner at the Mexican restaurant opposite which was convenient for the hotel, Rooms were basic but clean and for a 1 night stay we were comfortable. The breakfast was good with fresh bread rolls and the usual continental fayre.

We have slept here for one night on our way to Italy. Due to some traffic delays we could not arrive before 10 pm. Friends, who already there wanted to check in for us. The reception guy made a huge issue of it. It worked out in the end. When we arrived at 10:30 reception guy was still there, so we could have checked in ourself, even he said that check in after 10 pm was not possible. Rooms had average size, bathroom a bit old (bad shower), a bit noisy and good breakfast. Don't know if I would sleep in the same hotel next time we go to Italy. Location is good though

A perfect place to stay in Kempten.

We stayed 2 nights during a recent trip to the area. The front desk staff were helpful and polite. The room was large and clean too only €7 for s great European-style breakfast and free wifi AND parking.

Overall a great motel with convenient location near the city center and autobahn too. We will stay here again when visiting the Allgau area.

I booked 2 double rooms and arrived at the hotel later then the normal check in, which was no problem. If you arrive later than 22:00 there is a machine for check in. The hotel staff were very helpful and recommended a very good restaurant in Kempten called "Stift". We had a room on the frontside and we left the window open but at 5AM had to close it because it was to loud. The hotel is clean and gave us the possibility to have also a smoker room. Unfortunately we did not have breakfast and thus cannot say anythig about it.