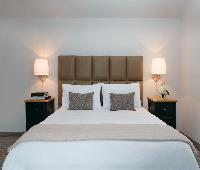 I have never written a hotel review before, but after my weekend at Sole East Beach motel I felt I had to. I recently stayed in the Sole East Beach motel with three friends. Upon entering our room, my friends and I noticed an extremely strong chemical smell. We immediately went down to the front desk to alert them and ask if we could be moved. The woman at the front desk informed us that the smell was from the recently installed carpet, but there was nothing she could do about it. Whenever my friends and I were in our room, we had to have the window and door wide open to try and get some fresh air. For two nights, we slept with the window wide open, hoping to diminish the smell. The smell, as well as the lack of screen or lock on the window made it nearly impossible for us to sleep. Each morning we all woke up with a headache. Our second night, we called asking again if we could move rooms, and we were told that the motel was fully booked. The excuse, although seemingly understandable, was a bit odd considering most of the rooms around us were visibly vacant. Upon check out, we again alerted the front desk of the issue and spoke with someone from management over the phone who claimed the general manager was away that day and would call back the following day. After not hearing from the manager, my friend had since called several times hoping to rectify the issue. Instead of receiving a call back, my friend received a rude email from management basically claiming we were all lying about the smell and that they refuse to discuss the matter any further. I would definitely not suggest staying in a place with such unhelpful, dishonest management.

Disaster from the start

My girlfriend and I had just spent a night at the ocean colony. We wanted to stay in town for an additional night. Thus bringing us to sole east beach. Honestly I know I should capitalize the name. However, this place does not deserve it. We got to the hotel at 1:25PM and waited till 2:15PM for anyone to check us in. Once someone came we were immediately asked how did we get in. Honestly I was astonished. With no questions we were then handed keys. No signature needed or even proof of identification. Once we got into the room it seemed okay at first. I looked around since I was already ticked off, and started nit picking. The AC unit is poorly placed and looks terrible. The outlet does not even provide the proper set up. Picture will be provided. Honestly no other complaints with the room. However staff needs to up their game.

Conveniently located to the beach and town!

Sole East Beach is very well located - it is within walking distance to the beach and town. Our room was not ready when we arrived, but the Front Desk called us as soon as the room was ready (which was before the 3pm check-in time). The rooms were clean and have a modern feel. I would stay here again.

I normally don't write really bad reviews but I had to say something this time. This 3-day Montauk visit was with 2 other couples and we all stayed at Sole East Beach. The A/C in our room did not work for the 3 days that we were there. We complained immediately to the girl at the front desk and she told us that someone would check it out right away. That never happened... plus I do not believe that there is an actual maintenance person at this location. Plus the Front Desk never followed up on this complaint even though we complained twice. We tried opening the windows for ventilation and some outside cool air. Unfortunately the front sliding windows had NO screens and the side sliding window track was broken so it was not possible to open ANY windows or keep any open. There was no vent or exhaust fan or window in the bathroom and the toilet was not working properly. The carpets were quite dirty so walking barefoot in the room gave you a black film on the bottoms of your feet. The beds are ULTRA firm so if this isn't your taste don't stay here. Actually, I wouldn't stay here for any reason. And, by the way, there is NO pool or restaurant at this location. They are both at the OTHER Sole East location which is not within walking distance. This was NOT a great visit by any means.

We have done a few trips to montauk and this year our stay at Solé beach was good. It's close to the beach and local spots. Clean rooms but very slippery steps when wet! Be careful. We missed checkin on the day of and rolled in early the following day. The front desk girl was not there until 9am. So we just killed some time at the point. I would consider going back for another stay.